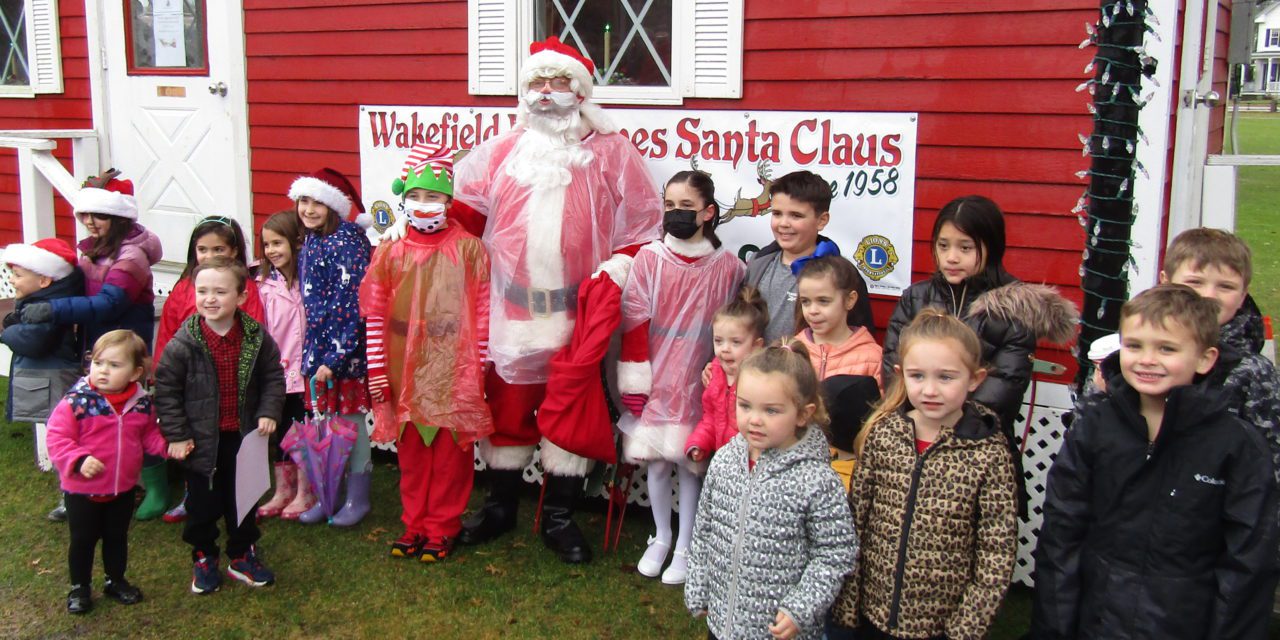 LOCAL CHILDREN gather around Santa Claus after his arrival at his headquarters on the Common. (Mark Sardella Photo)

WAKEFIELD — The steady raid on Saturday might have kept some people home, but the wet weather did nothing to dampen the spirits of the families who did come out to welcome Santa Claus to his Wakefield headquarters on the Common.

Wearing a clear plastic covering over his bright red suit to ward of the rain droplets and a specially designed mask over his face as a precaution against COVID, Santa made his way down Main Street in a sleigh provided by Designer Christmas Trees. He was escorted by a Wakefield Police cruiser and a fire engine from the Wakefield Fire Department as they turned the corner on to Church Street and pulled up in front of his Headquarters at the corner of Church and Common streets.

As he stepped from his sleigh accompanied by Miss Merry Christmas (Emma Lopes) and his elf, Jason Barry, Santa was greeted by the cheers of dozens of excited children and their families. After pausing to pose for a group photo with the children, Santa made his way into his headquarters to get ready as families lined up for their turn to go inside and share their Christmas lists with jolly Saint Nick. They even got to have their picture taken with the big man!

As it has annually since 1958, the Lion’s Club presented this year’s Christmas Pageant, featuring Santa’s arrival. Over the past 63 years, Santa has employed various means of transportation to get from the North pole to Wakefield. Some years he arrived by helicopter, landing on the Lower Common. Other years he rode atop a Wakefield Fire engine. In recent years, Designer Christmas Trees on North Avenue has provided their special sleigh to bring Santa into town.

Children and families are invited to visit Santa at his headquarters at the corner of Church and Common streets weekdays from Thursday, Dec. 16 to Thursday Dec. 23 from 3:30 p.m. to 7 p.m. Santa will also be greeting visitors Saturday and Sunday from 1 p.m. to 5 p.m. At the request of the town, masks must be worn while inside Santa’s Headquarters.