ZBA approves 440 housing units at head of the Lake 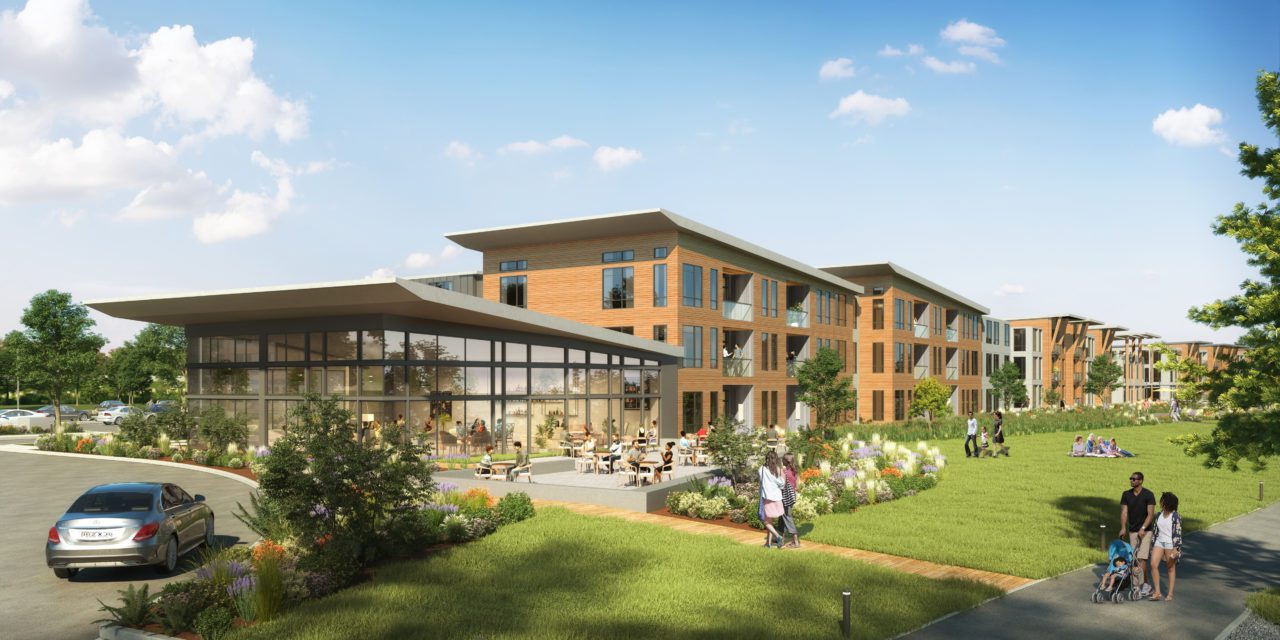 AN ARTIST’S RENDERING shows the project that will be built at the head of the Lake by Cabot Cabot & Forbes. CC&F has received the necessary Special Permits from the ZBA to construct 440 units of rental housing along with a restaurant in three buildings on the former site of American Mutual and Converse Technologies.

WAKEFIELD — After more than a year of formal public hearings, the Zoning Board of Appeals last night granted the Special Permits and site plan approval that will allow real estate giant Cabot Cabot & Forbes to redevelop the property at 200-400 Quannapowitt Parkway and build 440 units of rental housing in three buildings. Another Special Permit allowing a 3,667 square foot restaurant in one of the buildings was also granted.

The site is the former location of American Mutual and Comverse Technologies. The building on the site has been vacant since the last occupant, Digital Realty Trust, vacated the premises several years ago.

Last night’s ZBA vote to approve the project was unanimous.

“This is the firm we want doing this,” said ZBA member Chip Tarbell, who made the motion to grant the Special Permits. “They are a stand-up company.”

Board member Tom Lucey agreed. “I appreciate their responsiveness to our requests,” he said.

ZBA chairman David Hatfield said that Town Counsel Thomas Mullen had reviewed the decision and was comfortable with the language.

Over the course of a year’s worth of hearings, the ZBA has reviewed various aspects of CC&F’s proposal, including economic, traffic and environmental impacts as well as the project’s anticipated impact on schools and other municipal services.

As part of the decision to grant the Special Permits, the ZBA was required to make a number of legal findings.

The board made a finding that the project “is essential and/or desirable to the public convenience or welfare. The combination of uses proposed will provide much-needed new multifamily residential housing opportunities including a significant affordable component with supporting restaurant use while removing a blighted use. Furthermore, public access and amenity areas are included as part of the use, significantly enhancing public convenience and welfare.”

The ZBA also made a finding that the project will not create or add undue traffic congestion or impair pedestrian safety and will in fact improve pedestrian circulation with a new public path, as well as sidewalks and walkways. The board found that the 702 parking spaces proposed are adequate.

The board also found that the project will not overload public water, sewer or drainage systems or other municipal systems.

“The project will not impair the integrity or character of the district or adjoining districts,” the board determined, “and will not be detrimental to the public health, convenience or welfare.”

“The board finds that, as a result of more than two years of working with the town and Friends of Lake Quannapowitt, the proposed design of the project is sensitive to and reflective of the area context.”

The board also found that, “The mix of uses proposed will improve an underutilized site while providing new amenities to the surrounding neighborhood.”

The ZBA decision to grant the Special Permits came with a a long list of conditions. Those include a commitment from CC&F to provide $1,750,000 for improvements to Quannapowitt Parkway, an additional $600,000 contribution for roadway and intersection mitigation, a $1.3 million contribution for water quality improvements to Lake Quannapowitt and $225,000 to address inflow and infiltration issues.

Cabot Cabot & Forbes officially filed its plans with the town to redevelop the property in March of 2021.

But prior to CC&F’s residential proposal, it appeared that the site was headed for a new commercial use as a research and development facility.

In late 2019, Waterstone Properties secured the necessary Special Permits and other zoning relief that would have allowed them to lease out the former American Mutual/Comverse building for research and development, laboratory and office use.(Waterstone had purchased the 24-acre property in January of 2018 for $15 million.)

But just weeks after obtaining those Special Permits, Waterstone abandoned its plans and quietly held several “informal” meetings with groups of local residents to float the idea of a large residential development on the site to be built by its partner, Cabot Cabot & Forbes.

That original concept called for a total of 600 residential units to be constructed on the site. But after feedback from the ZBA, the Friends of lake Quannapowitt and other stakeholders, the project was first reduced to 485 units and later dropped to 440 units. The condominium component was abandoned.

“Thanks for your patience and cooperation,” he said. “We’re looking forward to doing business in Wakefield.”

Attorney Brian McGrail, who represented CC&F throughout the permitting process, also thanked the board, FOLQ and town officials.