Post two wins over the weekend, edge Trojans and Chiefs 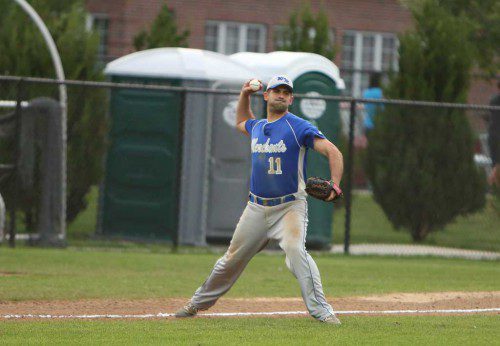 MIKE SORRENTINO drove in both Merchants runs yesterday in a 2-1 win over the Andre Chiefs and had two hits in Wakefield’s 5-4 triumph over the Arlington Trojans on Friday night. (Donna Larsson File Photo)

WAKEFIELD — The Wakefield Merchants snapped their six-game losing streak as they won two of the Intercity League games they played this weekend and those two victories didn’t come easily.

Wakefield prevailed by one-run decisions over the Arlington Trojans on Friday night at Summer Street Field by a 5-4 tally and the Andre Chiefs in a 2-1 duel last night at Walsh Field. In between, the Merchants were blanked by the Reading Bulldogs by a 6-0 score yesterday afternoon at Endicott College.

Wakefield is now 9-14-1 on the season and is fifth place in the ICL standings. The Merchants now lead the sixth place Melrose Americans (7-15-0) by five points in the standings. Reading, meanwhile, is a solid fourth with a 16-9-0 record. Wakefield trails the Bulldogs by 13 points.

Marchesi (2-3) got the better of Freni as he went the distance giving up one run on seven hits while striking out four and walking one.

Freni (4-1) went five innings giving up two runs on five hits while striking out eight and walking two. Matt DiCato relieved Freni in the sixth and surrendered one hit.

The Merchants trailed 1-0 from the second inning until they rallied for two runs in the home half of the sixth inning to eventually emerge with their second triumph in three games.

Yianacopolus and Louis Tarantino each scored a run with Sorrentino getting the two RBIs. Also reaching base were Manoogian and Tarantino as both drew walks.

The Chiefs had one more hit than the Merchants and scored one less run. Mike Gedman and Johnny Welch each had two hits. Mike Andre, Mike Burgoyne and Danny DiMare each had one hit.

Welch had a double and Billy Mottram stole a base. Mottram also drew the lone walk surrendered by Marchesi.

Scoring the lone run for the Chiefs was Welch and Pete Copa had the lone RBI.

Any momentum Wakefield had from the Arlington win was halted in the first game it played yesterday afternoon in a makeup against the Bulldogs. The Merchants mustered just two hits and were blanked by a 6-0 tally.

The Bulldogs scored five runs in the first inning and one in the third as they banged out nine hits total.

Getting the two Merchants hits were James Ramsey and Barry. Sorrentino and Barry also reached base by being issued walks.

Kyle McCarthy (2-3) went five innings for the Merchants giving up six runs on eight hits while striking out three and walking three.

Kevin Flight hurled an inning of relief and yielded a hit and a walk.

The offensive stats for the Bulldogs were unavailable.

The Merchants put an end to the slide on Friday night against the seventh place Trojans at Summer Street Field as they rallied for a 5-4 victory.

Wakefield scored a run in the first and two in the third to take a 3-0 lead. Arlington plated two runs in the fourth to cut the lead to 3-2. The two teams scored single runs in the fifth and seventh innings as the Merchants pulled out the win.

The Merchants had eight hits total with Sorrentino and John Davison getting two hits apiece. Losanno, Ramsey, Manoogian and Barry each had a hit. Barry had the lone extra base hit with a double.

Ramsey scored two runs, while Sorrentino, Davison and Manoogian each crossed the plate. Barry had a game high three RBIs, while Manoogian and Neil each drove in a run.

Paul Frisoli pitched an inning giving up one run on two hits while striking out one and walking one.

Tom Russo led the Arlington offense with three hits, while Conor Reensterna, Kyle Bourdrias, Kyle Hood, Blake Yee and Ben Johnston each had one hit. Reensterna had the only Arlington extra base hit with a double.

Reensterna, Bourdrias, Hood and Russo scored the four runs. Hood, Morgan Brown, Yee and Johnston each had an RBI.

Hood also reached base twice as he received the two walks surrendered by Ferlan.

The Merchants will see the Arlington Trojans again on Wednesday night on 6 p.m. at Walsh Field.