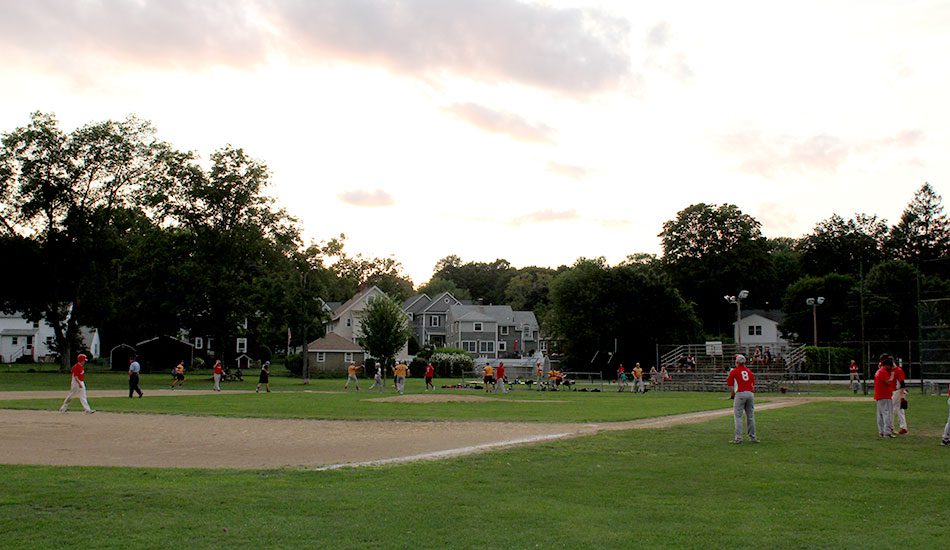 A SUNSET will hopefully return to Moulton sooner than later this summer as the Twi League has had to dodge raindrops for most of the first two weeks of July. (File Photo)

WAKEFIELD — Moulton Park this July might feel more like Water Country than a baseball haven (or heaven depending on how much the Twi League means to you…or maybe if you played seven innings without pulling a muscle).

Yes there are parallels: Like Water Country, in a typical summer season for Wakefield baseball players there’s “no better place to feel or be young…Moulton Park, have some fun.”

Unfortunately, there’s nothing fun about an underwater baseball field.

The Twi, in the words of Carl from Caddyshack, has mostly played through, doing their best to avoid the heavy stuff. Although it’s only meant playing three games so far in the month of July, sunny days are surely ahead.

Speaking of ahead, it’s the Highlife who currently reside alone in first place with a 3-1 record. In second place is, well, pretty much everyone else. The Loafers (2-1), Brewers (2-2), Slappers (2-1) and Unknowns (2-3) all have four points while the Expos are still searching for their first win at 0-3.

Four teams will play chicken with yet another thunderstorm set to roll through Wakefield anywhere from 5-8 p.m. tonight. The Highlife and Expos will play at Moulton while the Loafers and Brewers will square up at Walsh, both games starting at 6 p.m.

The Brew Crew are coming off their second straight victory, a 4-0 shutout over the Unknowns last night. The Loaf got their second win of the season on Sunday with an 8-1 triumph over the Expos.

The Highlife will need to shake off some rust, playing for the first time since beating the Expos 8-5 on June 28.

The weather looks much better for the rest of the week with mid-80s and party cloudy on the docket for the reigning champion Slappers to play the Loafers at Moulton, 6 p.m. tomorrow. A similar day will welcome the Unknowns and Expos to the field on Friday, same time and place.

Despite the pesky rain, the Twi League is still thriving as evidenced by the addition of multiple new players, most notably recent Wakefield High graduates, as Moulton continues to be “Walsh West” in terms of Warrior baseball alums.

Best of luck in your first season boys. You don’t need any advice from outsiders, that’s what your new teammates are for…ahh maybe just one: Don’t…bunt!

– The winless Expos only need to look at the Slappers for inspiration. The Slap also started last season’s abbreviated eight-game slate 0-3 before roaring back and eventually winning a wild Finals three games to two over the Brewers.

– Tonight’s game at Walsh is the second of four scheduled Twi games at the home of Wakefield High. The Twi used to almost exclusively play their games at Walsh back in the day before moving to Moulton. Walsh has a more open schedule this season with the Intercity League original Wakefield Merchants no longer playing.

– To my late 20s and 30s Twi Leaguers: did you know Water Country was in Portsmouth? Of course you didn’t, you just piled into your friend’s mom’s mini-van, maybe traded some baseball (or lets be real, Pokemon) cards for an hour and sprinted to the gates as soon as you parked. So, no, it’ not in “like, Western Mass?”