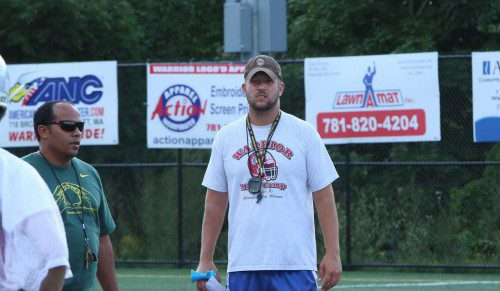 Published in the September 1, 2015 edition

WAKEFIELD — There has been a change at the head coach’s position for the Wakefield Memorial High football team with Steve Cummings beginning his first year at the helm of the Warriors. There also has been a turnover among some of the assistant coaches as well.

The newcomers to the Warrior staff are Chris Tolios, Anthony LaFratta and Rich Moran. Also returning after a year’s absence is Gus Dettorre.

“I think it is good to have coaches from other places,” said Cummings. “They add a different perspective on things.”

Tolios will be the team’s new defensive coordinator, a position that Cummings held until he was named the new head coach. Tolios coached in Danvers in the past and was at Ipswich a year ago.

“Chris has been hired as a health teacher at the Galvin, so I hope he will be with us for a long time,” said Cummings.

LaFratta has coached boys’ indoor and outdoor track as an assistant with Reinoso and is no stranger to Wakefield. LaFratta teaches at Lynn Tech and was an assistant on the Lynn English football staff. He will be working with the skill players on offense, mostly likely in the backfield.

Rich Moran is the father of senior Mike Moran and works in the Middlesex Sheriff’s office. He also will work with the skill position players. Right now he is working with the wide receivers.

Dettorre took a year off last fall and he returns to coach the linebackers and backs on offense as well.

Reinoso, Berry and Gallant all were on the staff in 2014.

Reinoso is back as the team’s offensive coordinator and he was been working with the quarterbacks, while Berry and Gallant work with the two lines. Berry is an offensive line coach and Gallant coaches the defensive line.

Also back is special assistant to the head coach Joe Elcewicz who has been with the program a long time.

The entire freshman coaching staff has remained intact. Rick Quattrocchi is the head freshman coach and his two assistants are Tom Crusco III and Brian Millea.