Warrior wrestlers trip up the competition 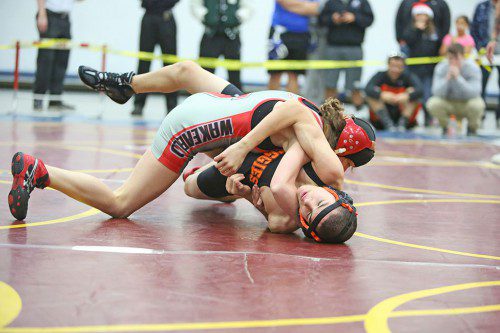 SHANNON DRAGER, a junior (left), posted two victories in the South Hadley Dual Meet Tournament on Saturday. Drager won one match at 120 by pin against Hampshire Regional’s Julia Laplante and she accepted a forfeit at 126 in the meet against Southwick. (Donna Larsson File Photo)

SOUTH HADLEY — On Saturday morning, the members of the Warrior wrestling took a bus ride for about one hour and 45 minutes and traveled 100 miles to compete in the South Hadley Dual Meet Tournament at South Hadley High School.

Wakefield made sure the trip was worth it as it won all three of its meets.

The Warriors earned a 52-27 triumph over Granby, a 43-27 win over Hampshire Regional and a 45-33 victory over Southwick.

Wakefield is now 8-3 overall on the season.

Jacob Allen, a sophomore, earned his first varsity win at 113 as he pinned Ben M’scarveau at 35 seconds.

At 132, freshman Jake Goodchild lost to Victor Maghales at 40 seconds, while at 138, freshman Ryan Smith was defeated by Ben Rokowski at 54 seconds.

Dan Bertini, a senior, and Evan Gourville, a junior, both won by fall at the 160 and 170 bouts. Bertini pinned Tyler Dudek at 2:28 and Gourville pinned Jack Samacki at 5:39.

Senior tri-captain Ryan Cunningham earned four points for the Warriors as won by major decision (12-1) over Nick Roberts at the 182 match.

Alex Kane, a senior tri-captain, was on the short end of a 6-4 decision against Nolan Hodgins at 220.

The Warriors again were strong at the lighter weight and heavier weight classes in their victory over Hampshire Regional.

Hamphire Regional’s Brendon Weir accepted a forfeit at 138 before his team won three straight at the 145, 152 and 160 weight classes.

Piercy and Marinaccio were pinned at the 145 and 152 contests. Piercy lost to Nick Hoskins at 41 seconds at 145 and Marinaccio was defeated at 49 seconds of the 152 match. At 160, Gourville dropped an 8-2 decision against Brandon Weyant.

Cunningham ended Hampshire’s momentum with a win by fall at the 170 weight class. Cunningham took down Calvin Laplante at 2:45.

Hampshire’s final points came at 182 as freshman Steve Mercurio was pinned by Mason Taylor at 48 seconds.

At 195, Wensley pinned Cam Durham at 15 seconds and Murphy pinned Jeremy Kaulback at the 285 contest. At 220, Kane pulled out 9-3 decision over Matt Carrier.

There was no contest at 106 as Wakefield won the meet.

The Warriors trailed 33-21 after 10 bouts but won the final four weight classes to defeat Southwick by a 45-33 score to complete the sweep at the South Hadley Duals.

Kane accepted a forfeit at 220 before Murphy prevailed by a 7-2 decision over Brendan Tingley at the 285 match.

The meet begin with Spicer winning by fall over Dakota Wood at 1:17 of the 106 weight class.

Marinaccio won by injury default against Nolan Labreque at 152 before Gourville pinned Nick Peterson at 1:58.

Southwick’s final points of the meet came at 170 where Bertini lost by fall to Connor Stevens at 3:35.

Wakefield then scored the last 21 points of the meet to prevail.

The Warriors return home to take on Lynnfield/North Reading tomorrow night in a dual meet that begins at 7 p.m. at the Charbonneau Field House.