First Warrior to medal in prestigious showcase since 1988 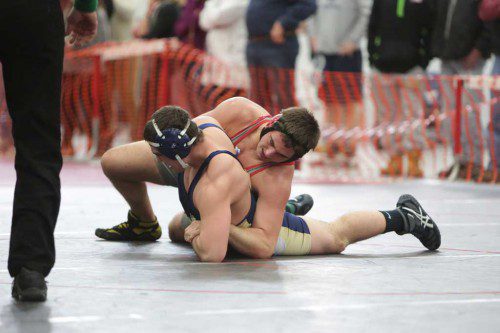 DAN WENSLEY, a senior (right), wrapped up his Warrior wrestling career with a sixth place finish at the 2015 New England Wrestling Championships. Wensley is the first WMHS wrestler to medal in the meet since 1988. (Donna Larsson File Photo)

Wensley finished sixth overall at the 195 weight class as he posted a 2-3 record among the top wrestlers in the region.

Wensley is the first Warrior to medal at the New England Wrestling Championships since Anthony Lisitano accomplished the feat in 1988. Lisitano also took sixth in that tournament and did so at the 275 weight class.

In his first match, Wensley scored a 6-4 decision over Tollgate, R.I.’s Edmund Pierce.

The senior then defeated Bridgewater-Raynham’s William Fuller by a 2-1 tally.

In the semifinals of the winners’ bracket, Wensley then took on Dylan Barrerio of Pinkerton Academy, N.H. and dropped a major decision, 14-6.

Wensley then had two more bouts in the consolation bracket and lost both to finish sixth.

The senior faced Framingham’s Jake O’Brien and was edged by a 5-3 decision. In his final contest, the consolation bracket semifinals, Wensley dropped a 6-3 decision to Londonderry, N.H.’s Rich Bilodeau. That resulted in his sixth place showing.

Wensley wrapped up the 2014-15 season with a stellar 52-5 record and finished his Warrior career with 152 victories. Wensley and teammate Alex Kane are tied for the most career victories at WMHS as both accomplished that mark this season.