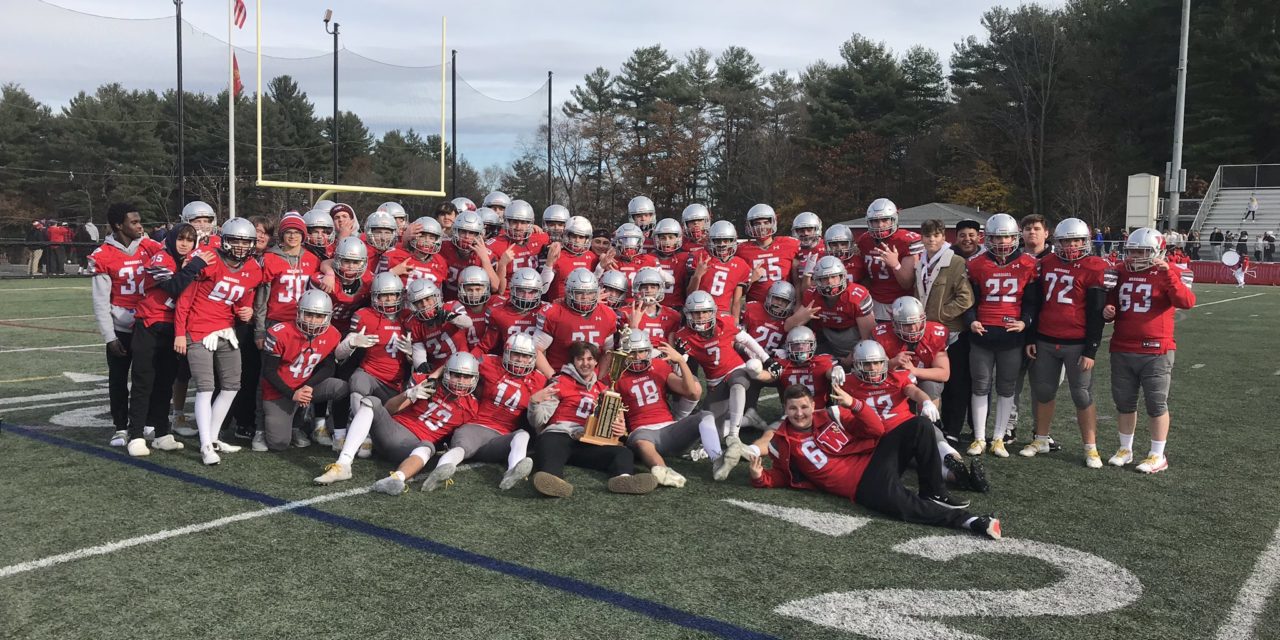 For the first time since 2011, the Wakefield Warrior football team was victorious on Thanksgiving Day against rival Melrose in the 61st Turkey Day Classic with a final score of 21-13.

The victory on a beautiful morning in front of a stuffed Landrigan Field snapped an eight-game Red Raider Thanksgiving winning streak and an overall head-to-head streak of 11 games.

“It’s a great feeling – it’s exhilarating,” said Wakefield head coach John Rafferty. “I think there’s a little bit of shock too, as in, ‘Did we really just do that? Yeah, we did.’” 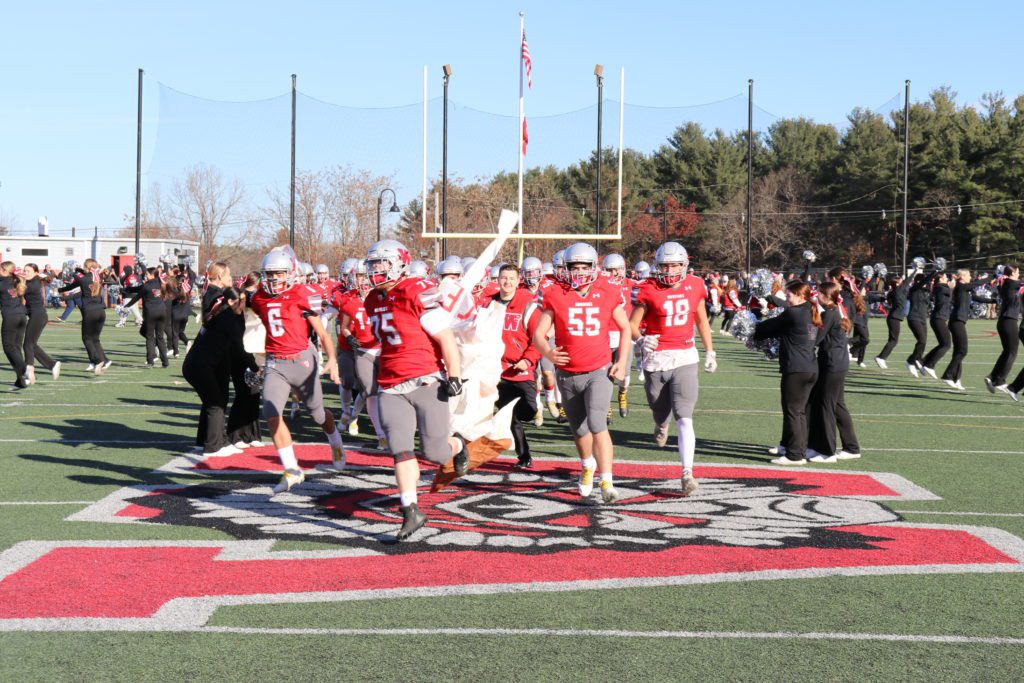 With the brine of a Turkey Day victory marinating for a decade, the home team cooked up a performance that was equal parts gritty and entertaining, overcoming plenty to accomplish their goal including a 13-7 halftime deficit, a 3rd quarter Melrose goal-line stand at the 1-yard line and multiple injuries that Wakefield’s Warriors decided would just have to be dealt with on Black (and blue) Friday.

Wakefield’s road to 21 points was anything but traditional during the 111th meeting between the two teams, with three touchdowns and a safety.

The defense stepped up in the second half, shutting out the Red Raiders and with that safety, also pairing five sacks and a fourth-quarter pick six by senior Jack Berinato to push the lead to what would eventually be the final score. 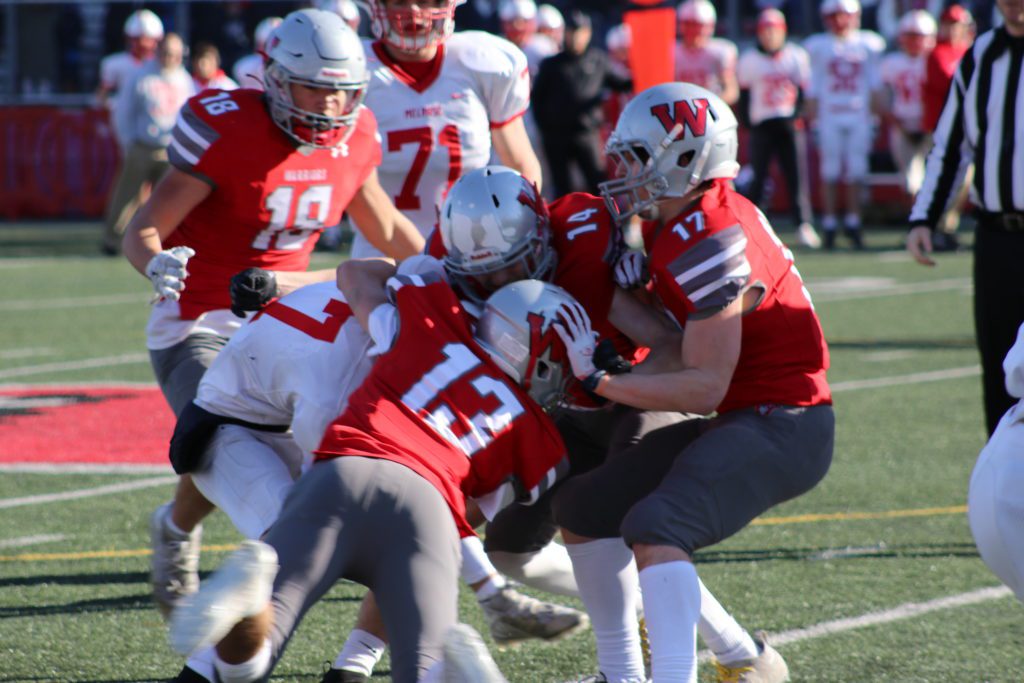 THE WARRIOR DEFENSE was swarming on Thanksgiving, shutting out the Red Raiders in the second half on their way to a 21-13 victory. Pictured from left to right is Ian Dixon (18), Tim Connolly (13), Bryan Lynch (14) and Steven Woish (17). (Dan Pawlowski Photo)

The numbers agree with the outcome…Wakefield earned this one.

They had 305 total yards from scrimmage compared to 186 by Melrose, 135 of which came in the first half. The Warrior D held Melrose to just nine rushing yards and 22 passing yards in the second half. Melrose had eight first downs in the first two quarters and just two in the final two.

“We were a team today,” said senior captain Bryan Lynch. “We wanted it more than they did.”

Offensively, it was certainly a team effort hat led to a dominant performance from the ground game highlighted by the thunder and lightning of senior captain Leo Yardumian (18 carries, 103 yards, 1 TD) and junior Nathan Delgado (16 carries, 100 yards, 1 TD) behind an offense that essentially included nine linemen to go with junior QB Javin Willis (10 carries, 72 yards) and whomever the ball carrier was. 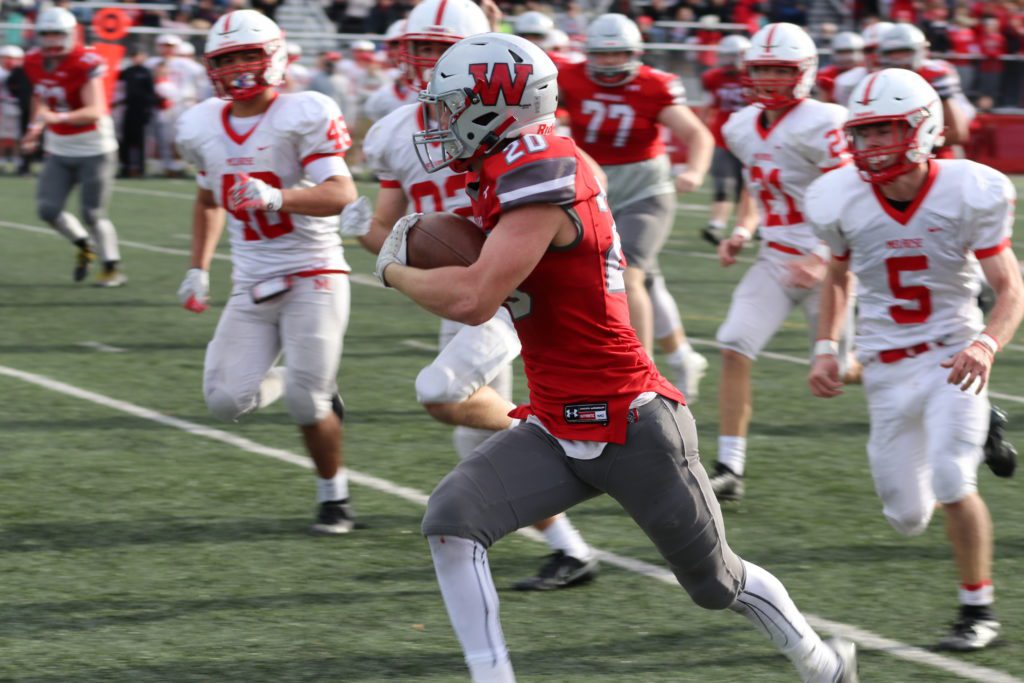 LEO YARDUMIAN gets loose for a 24-yard run in the 4th quarter on Thanksgiving. The senior captain racked up 46 of his 103 rushing yards on this possession which he ended with a 1-yard TD run to give the Warriors a 15-13 lead. (Dan Pawlowski Photo) 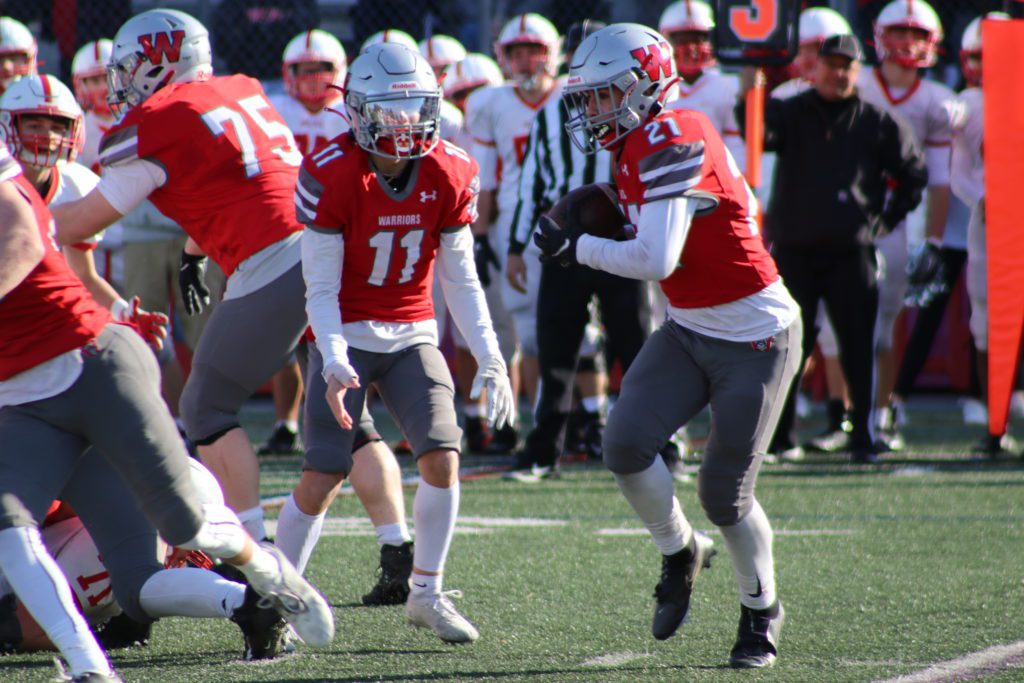 The first goal-to-go stand of the game belonged to Wakefield after the Red Raiders drove to the 7-yard line on their second possession. Melrose senior QB Trevor Botto was stopped by Lynch on 1st down and a combo of Lynch and Luke Ickes on 2nd down. That set up 3rd-and-goal from the 4 where Chris Amyouny brought down Botto on a QB draw for a loss of one. Melrose kicker Zach Federico converted from 22 yards out for a 10-7 lead.

After Wakefield’s next drive stalled, Melrose quickly got into range for their star kicker who booted another one through, this time from 33 yards out as time expired for a 13-7 advantage at the break.

The relatively even first half was equal parts encouraging and disheartening for Wakefield fans, who must have been wondering what it would actually take to see their team break the streak.

The answer came after those doubts grew when Lynch was called down just short of the goal line on 4th down, much to the delight of a well-traveled Red Raider nation. On the ensuing 2nd down from his own 1, Botto dropped the snap, and was swarmed as he went down to pick it up by Dixon, who ripped him down for a safety and set off the first of many second half celebrations from the Red Sea student section.

“We went back to basics,” said Rafferty when asked about the defensive halftime adjustments. “The reminder at halftime, was ‘Let’s focus on technique and assignments and let’s execute. It wasn’t anything crazy, there was no master plan – the kids were just great.”

The Warriors moved the chains a few times on their next drive but came up short on 4th and 1 from the Melrose 9 when Willis, who was dealing with an injury on his throwing hand, was picked off by Fogarty after the pass got tipped.

With 9 minutes left, Wakefield’s defense forced a three-and-out, capped by Chris Amyouny’s second sack of the day on 3rd down.

With 7 minutes remaining, Yardumian put the team on his back with the Warriors starting their drive on the Melrose 46, down 13-9. The senior tri-captain rushed for all 46 of those yards on five carries, the final one a 1-yard touchdown in which he broke two tackles behind the line of scrimmage before breaking the plane with a “Let’s Go!” directed at the Warrior alumni celebrating behind the North end zone.

In a direct response to the respect for Federico’s kicking range, Rafferty and his staff opted to go for two in hopes of a four-point lead, but Yardumian was finally stopped to keep the score at 15-13.

The result meant one thing: The defense would have to salt away 10 years of plain-tasting turkey in Wakefield.

The Warrior Marching Band and Dance Teams had the top two shows of the day, but a close third was the examination of Berinato and his broken left hand before the coin flip. The referees deemed the closed-fist cast to be legal, no doubt with some words of caution for the senior safety to be careful with it. He wasn’t that exactly.

On 4th-and-3 from their own 34-yard line, Melrose called timeout with 2:50 left. A pass from Botto deflected off a Melrose receiver. In reality, the ball was in the air for about 1.5 seconds…to Berinato, it might still be floating in his mind. He read the change of direction, made a fundamental one hand, one cast catch, broke a tackle at the 35 and flew down the sideline, finding pay dirt and Wakefield football lore with a 42-yard pick six to put the Warriors up 21-13.

“I was lucky I got to play with my hand broken,” said Berinato as he marched with his teammates and the Thanksgiving trophy down Hemlock Road after the win. “It was tough with the club (cast) here but I was ready for the moment.” 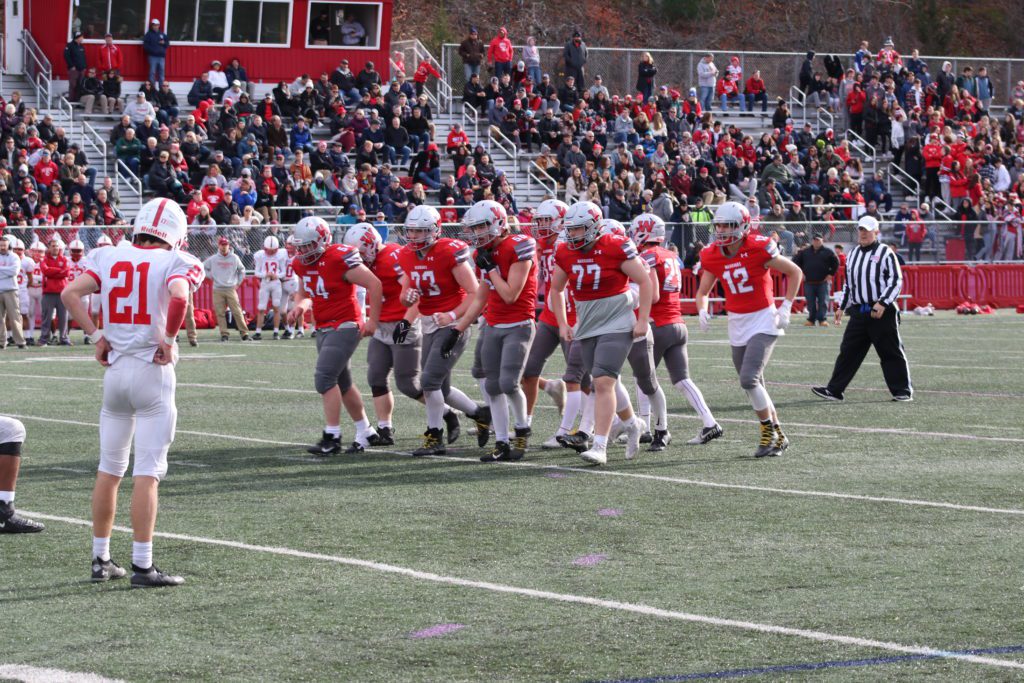 A missed point after technically gave Melrose a chance, but with even more momentum and crowd noise, the defense again wasn’t having it, forcing another turnover-on-downs thanks in large part to two sacks by Nathan Delgado and senior Tim Connolly.

Berinato fittingly had the coverage on Botto’s last-chance heave that fell to the turf, all but making it official.

“They just showed great perseverance,” said Rafferty. “Down at the half to come back in the second half like they did especially after that drive stalled at the 1. The defense really stood up in the last couple of series.”

The coach was especially thrilled for the seniors, a group not much known for noise or fanfare. They quietly set goals and put the work in to accomplish them. Wakefield finished the season at 6-4. They had a couple of tough overtime losses which kept them out of the state tournament. But as always, the season would come down to Thanksgiving. It was at the top of their list of goals all along.

“What a way to go out,” said Nathan Ickes amongst the celebration. “This is the one that matters to us. Huge way to end it.”

“I’m extremely happy for them,” said Rafferty of his seniors. “What I’ll continue to remind them off is they just completed something great: stopping the streak and winning on Thanksgiving Day – something that hasn’t happened around here in a long, long time. My hat is off to them, it’s a great way to go out. No better way.”