Warriors rally in second half for 20-13 triumph over Stoneham 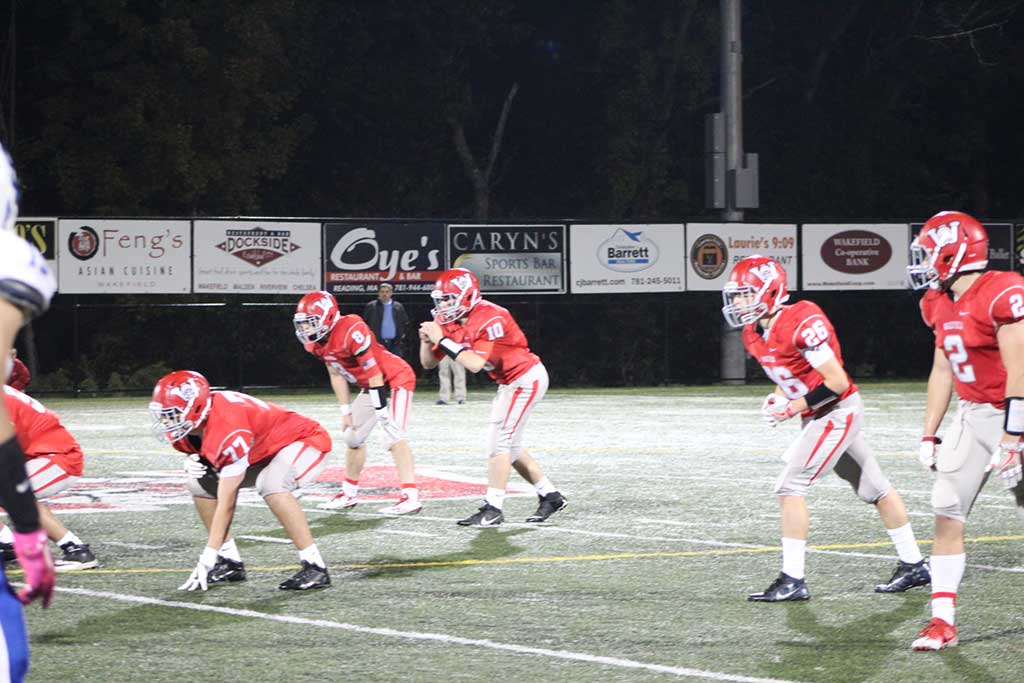 SOPHOMORE QB Mike Lucey (#10) gets ready to take the shotgun snap with senior RB Joe Marinaccio (#8) lined up to his right. Also in the photo is lineman Devin O’Brien (#77) and receivers Ryan Fitpatrick (#26) and Carmen Sorrentino (#2). The Warriors rallied for a 20-13 win over Stoneham on Friday night at Landrigan Field. (Keith Curtis Photo)

WAKEFIELD — One of the qualities of a champion is the ability to overcome adversity and not panic when things aren’t going your way.

The Wakefield Memorial High football team may not be a Middlesex League Freedom division champion yet but it took a big step of achieving that goal as it rallied for a 20-13 triumph over Stoneham on Friday night before a big crowd of several thousand fans in attendance at Landrigan Field.

The Warriors are the only team in the M.L. Freedom division as they have a perfect 3-0 record in league play (Wakefield is 3-2 overall). A win over Burlington on Friday will give the Warriors at least a share of the league crown.

Meanwhile, the Spartans came into the game undefeated at 4-0, but were handed their first defeat of the season. While Stoneham has a better overall record than Wakefield at 4-1, the one loss is a costly one since it came in league play.

Wakefield scored the first touchdown of the game on its third series of downs. But the Stoneham defense held the Warriors to just the six points and eventually the Spartans scored before halftime to take a 7-6 lead at the break. Stoneham led 13-6 before Wakefield answered with two touchdowns, one in the third quarter and one in the fourth quarter, to pull out a hard fought win.

“Stoneham was as good as advertised,” said Coach Steve Cummings. “Their big. Number 78 (Shane Collins) is a monster. They play smash mouth football and it was a war of attrition. We had a couple of guys banged up and it was the next man up mentality for us. The kids played well. Stoneham was 4-0 and we knew it was going to be a close game.

“We knew we were going to have play well for all four quarters. It was a league game and Coach Bob Almeida prepares his team very well,” added Cummings. “We knew it was going to be a tough game and we’re feeling it right now. It was a very physical game.”

Wakefield gained 210 yards of total offense to Stoneham’s 152 total yards and the Spartans made the Warriors earn every inch. The Warriors had 126 yards rushing which was one more than Stoneham. However in the passing game Wakefield threw for 84 yards while the Spartans had just 27 yards through the air.

Wakefield also won the turnover battle for the third straight contest getting an interception and a fumble recovery. Even though Wakefield turned the ball over once for the first time in three games and it led to six Stoneham points, the Warriors still were able to pull out the win.

Senior running back Joe Marinaccio led the way on the ground gaining 68 yards on nine carries. Marinaccio also had one reception but it was a 24 yard TD catch.

Senior RB PJ Iannuzzi rushed for one touchdown and caught one TD pass. Both scores were from three yards away.

Mike Lucey, a sophomore QB, completed five out of 13 passes for 84 yards and two touchdowns. He also threw an interception which was returned 31 yards for a Spartan TD. However the sophomore came back strong.

“I thought Mike Lucey did a nice job. He threw that pick but we came back and was right on the money with the pass to (Alex) McKenna (on the 39 yarder). He also threw an excellent pass to Marinaccio on the touchdown. We were able to execute when we had to.”

Defensively, Iannuzzi led the way in tackles with nine, while sophomore linebacker Dan Marinaccio had six stops and McKenna had five. Joe Marinaccio recovered a fumble and senior DB Pat Leary had an interception.

“Defensively we were solid. We told them stopping their run game on first down was huge. We put them in second and 12s and third and longs which changes what plays they like to call,” said Cummings.

Stoneham won the coin toss and deferred to the second half which resulted in the Warriors getting the ball first. After a three and out Wakefield punted the ball away. However on the first play from scrimmage, senior FB Tim Russell (48 yards on 11 carries and a TD) fumbled and Marinaccio recovered the ball as the Stoneham 26.

The Warriors didn’t score as Lucey was sacked for a three yard loss. After a two yard run by Marinaccio, two incompletions resulted in Stoneham taking over on downs at its own 27.

A holding call on first down pushed the Spartans back and they eventually punted as Wakefield took over its own 47 after a 14 yard return by Ryan Fitzpatrick in the field position battle.

The Warriors cashed in on their third possession with a four play scoring drive. On first down, Marinaccio broke a 43 yard gain as he ran to the outside and leaped over a defender on his way down the left sideline. He would have scored if junior DB Tre Pignone not tackled him at the 10 yard line. On first and goal Marinaccio brought the ball down to the 5. Iannuzzi gained two yards on second down. On third and goal, Iannuzzi barreled into the end zone from three yards away.

Iannuzzi’s PAT attempt was short as Wakefield led 6-0 with 3:42 left in the first quarter.

Stoneham got its run game going on its next series of downs which began at its own 36 yard line. Senior TB Thiago DeAlmeida (56 yards on 11 carries) had runs of eight, 10, nine and zero yards. Russell had runs of seven, three, five and five yards. Junior QB Pignone had runs of three yards and a loss of a yard. Pignone also completed a pass to freshman WR DeShawn Chase for six yards. However a holding penalty on the reception pushed Stoneham back into a third and long. The ball eventually went back to the Warriors on downs as they took over at their own 18 with 8:19 left in the second quarter.

An illegal chop block penalty on Wakefield pushed the Warriors back to the 10 yard line. A 13 yard loss on a third down sack by Collins led to Wakefield punting from its own end zone. Leary got off a 44 yard punt with no return as the Spartans took over at their own 49.

Stoneham needed nine plays to get into the end zone and take the lead.

DeAlmeida had runs of four and seven yards for a first down. Pignone then gained 11 yards to move the chains again. DeAlmeida had gains of three, four and four yards. Pignone also had an eight yard gain in between DeAlmeida’s runs. Russell then forged ahead with a two yard gain setting up a third down and four from the Warrior 8. Russell broke through with an eight yard TD run to tie the game at 6-6.

DeAlmeida converted the extra point to give Stoneham a 7-6 lead with 1:09 left in the first half.

Senior WR Carmen Sorrentino caught a 14 yard pass as Wakefield went into its hurry up offense with 59 seconds left. However, Wakefield got the ball as far as the Spartan 45 before turning the ball over on downs. Pignone took a knee to end the first half but Stoneham had the one point lead headed to the locker room.

Stoneham picked up one first down on its first possession of the third quarter as DeAlmeida gained the one yard needed on fourth down to move the chains. But on first down at the Stoneham 40, Pignone recovered a bad snap for a two yard loss which resulted in long yardage and a punt on fourth down.

Fitzpatrick nearly gave Stoneham the ball back, but recovered the loose ball at the Wakefield 18 where the Warriors took over. Marinaccio had runs of two yards and 10 yards for a first down at the Wakefield 30. Iannuzzi was stopped for no gain on first down. On second down, Lucey attempted a short pass to the left side. But Russell anticipated the play and intercepted the ball and returned it 31 yards for the TD.

The PAT attempt by Almeida was blocked as Wakefield trailed by seven, 13-6, with 4:17 remaining in the third quarter.

The Warriors didn’t hit the panic button and answered immediately on their next drive. It also helped that Fitzpatrick returned the kickoff 36 yards to the Stoneham 44.

The possession didn’t start well with Marinaccio losing six yards on first down. After the senior RB got two yards back on second down, Wakefield faced a third down and 14 situation from the Spartan 48. Lucey rolled out to the left side and found a wide open McKenna with a 39 yard pass to bring the ball down to the Warrior 9. McKenna was wide open on the play and two Stoneham defenders nearly got back to defend the pass as the throw from Lucey was a little late on the roll out.

However McKenna made the catch and Wakefield had was in the red zone. McKenna then had a four yard reception on first down. Iannuzzi gained two yards on second down and then caught a three yard pass from Lucey for the TD.

Iannuzzi kicked the extra point to tie the game at 13-13 with 1:36 left in the third quarter.

Stoneham started its next possession at its own 31. On second down from its own 31, a bad snap resulted in a 25 yard loss as Pignone recovered the loose ball at the Stoneham six on the first play of the fourth quarter. Wakefield had an opportunity to take the ball away, but failed to do so. But the loss in yardage resulted in the Spartans punting the ball away and Wakefield taking over its own 45 after a 41 yard kick by DeAlmeida.

The Warriors needed five plays to get into the end with the game-winning touchdown.

Iannuzzi gained two yards on first down and then Leary took a handoff and broke a 43 yard run down the right side to set up a first down and goal from the Stoneham 10. Iannuzzi lost a yard and then Fitzpatrick’s attempt to dodge a host of Spartans resulted in a 13 yard loss back to the 24. On third down, Lucey fired a perfect strike over the right shoulder to Marinaccio on the left side of the end zone before the senior RB ran out real estate for the TD.

Iannuzzi added the PAT to give Wakefield a 20-13 advantage with 5:56 remaining in the fourth quarter.

Stoneham took over at its own 40 and picked one first down on a six yard run by Russell. But a three yard loss on first down put the Spartans in long yardage. On fourth down and 12 from the 50, Pignone went to the air with a long pass that was intercepted by Leary and returned four yards to the Wakefield 14 which actually cost the Warriors field position in the long run.

Senior RB Will Shea had runs of six, seven, four, and one yard, while Fitzpatrick had runs of five and four yards. Wakefield overcome a delay of game penalty to net one first down as well. However the Warriors were unable to kill the clock and punted the ball away to give the Spartans one last chance with 1:00 showing on the scoreboard.

Stoneham began its final drive at its own 43. Pignone completed a two yard pass to Chase and then spiked the ball to stop the clock. On third down, an intentional grounding penalty resulted in a seven yard loss setting up a fourth down and 15 from the Stoneham 38. Pignone completed an 18 yard pass to Russell for a first down, but time ran out as the Warriors held on for the seven point win.

“We’re 3-0 in the league and control our own destiny,” said Cummings. “We need to execute better when we play Burlington.”

The Warriors host the Red Devils on Friday night at 7 p.m. at Landrigan Field.