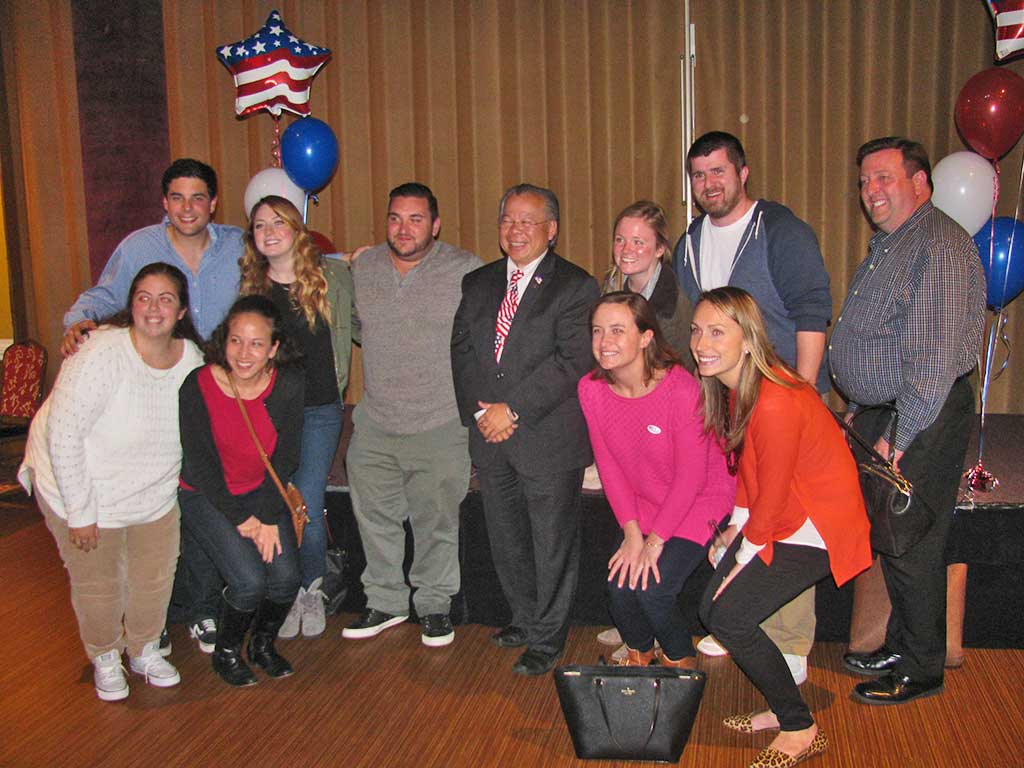 REP. DONALD WONG savors victory with a group of campaign workers and supporters at his celebration last night at the Kowloon in Saugus. (Mark Sardella Photo)

WAKEFIELD — At about 9 p.m. last night, a victorious Rep. Donald H. Wong stepped to the podium in a packed hall at the Kowloon Restaurant in Saugus. The incumbent Republican state representative had defeated his Democrat challenger Jennifer Migliore to retain the Ninth Essex District seat which includes four of Wakefield’s seven districts.
Wong won Wakefield precincts 1, 2, 3 and 7 by comfortable margins. He also won all nine precincts in Saugus. The only precincts that Migliore won were the two Lynn precincts in the district.
“I am thrilled to be celebrating a great win to serve you for a fourth term,” a jubilant Wong told supporters. “My opponent had the big machine behind her this election but the silent local majority had the stamina to stand up against it.”
Wong thanked the voters who believed in him and who “saw through the outside influence and misinformation that was put out there against my integrity, my stance and, most importantly, my family values.”
Migliore wrote in a post on her Facebook page: I’d like to start by thanking the incredible people of the Ninth District for their support. Over the past 11 months 10,000 of you have let me into your lives and told me about the issues that are most important to you. While the results tonight may not be what we had hoped for, I am proud of the discussions that we have started. I thank you for your time and support.
“From the bottom of my heart. I truly believe that the relationships that we have created and the things that we have accomplished will impact this community for generations to come. I know in my heart that we have changed the conversation around key issues including the Wheelabrator Ash Landfill Expansion, the Copeland Circle project and improving our schools. I thank the voters and congratulate Donald Wong on his victory.”
Looking forward to his fourth term, Wong outlined his priority areas.
“I will continue to focus on my six points,” Wong said, “education, seniors, veterans, the economy, public safety/substance abuse and infrastructure.”
Wong thanked a long list of state and local leaders for supporting him, including Gov. Charlie Baker, Lt. Gov. Karyn Polito, House Minority Leader Brad Jones and former State senator Richard Tisei. Jones and Tisei were with Wong last night watching the election results come in.
Wong also thanked many individuals and groups around the district who endorsed him, including six of the seven members of the Wakefield Board of Selectmen and Town Administrator Stephen P. Maio.
Later, Wong expressed his gratitude to the voters of Wakefield.
“I want to thank them for their support and their trust in me,” he said. “I look forward to another two years of working with them for the betterment of the community.”
Specifically, Wong said that he would like to help Wakefield to address the deficiencies at Wakefield Memorial High School in whatever way the community sees fit, including working with the Massachusetts School Building Authority to secure funding for a new high school.
Wong acknowledged that the Democratic Party pulled out all the stops to defeat him, with even heavy-hitters like U.S. Sen. Elizabeth Warren endorsing his opponent.
“It was like David against Goliath,” Wong said. “I attribute my win to the fact that I worked with the local people in my district.”