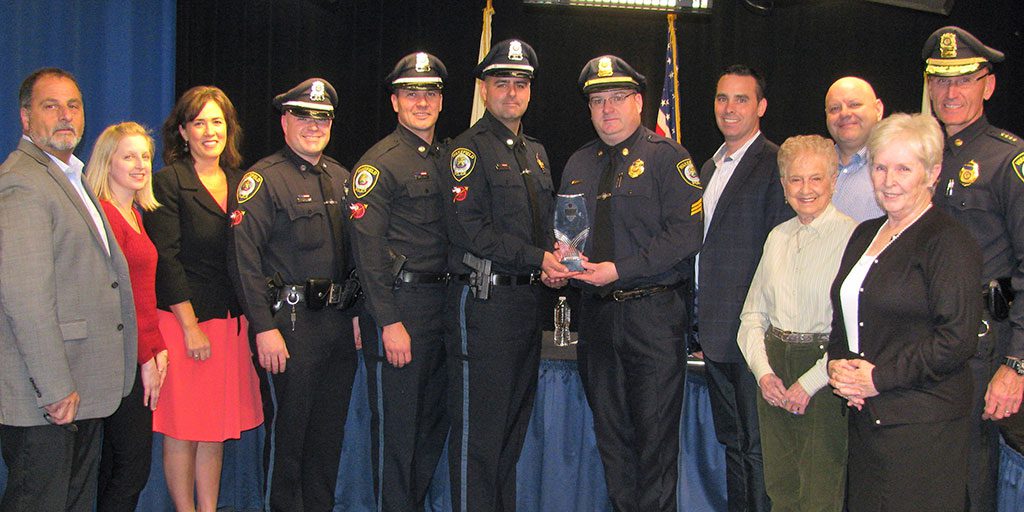 WAKEFIELD — “You are a top-notch police department,” Selectman Tiziano Doto told Police Chief Rick Smith and WPD officers last night. The International Association of Chiefs of Police (IACP) agrees with that assessment, as the Wakefield Police Department was one of only 10 departments worldwide to receive the association’s 2014 Community Policing Award.

Smith and five members of his department were before the Board of Selectmen to talk about the award, which was presented last month at the IACP’s annual conference in Orlando, Fla.

Smith told the board that the award was for what started out in 2010 as the “Silva Project,” where a group of officers led by Det. Kenneth Silva set out to address concerns related to homelessness and loitering in the downtown area. That project evolved into the department’s Crisis Intervention Team (CIT), Smith said, “to offer the services of the town of Wakefield and the Wakefield Police Department to those that are a little less fortunate.”

Working with agencies like Riverside, Elliot Community Human Services and the Department of Mental Health, Smith explained, Silva and other members of the Police Department put together the CIT to deal with issues that arise related to mental illness.

The award was based on the Wakefield Police Department’s work with mental illness, focusing on the Co-Responder Model and the Crisis Intervention Team.

Smith said that 10 members of his department are directly involved with the CIT. He introduced the four who accompanied him last night: Sgt. Kevin McCall (currently the officer in charge of the CIT), Officer Joseph Lyons, Officer Jason Skillings and Det. Kenneth Silva. Smith also introduced Jennifer Waczkowski, a clinician who works for the Wakefield Police Department and rides along with police officers.

Other members of the CIT, are Off. Matthew Warren, Off. Amy Toothaker, Off. Kelley Tobyne, Off. John Whaley, Off. Robert Haladay and Off. Kevin Flynn.

“This is a great award for this team,” Smith said, “but it’s not just this team that does the work. It’s every member of the Wakefield Police Department who do this work every day. They do an excellent job taking care of those in the community who need help.

“This award belongs not just to the 10 officers who are members of the CIT,” Smith said, “it belongs to the men and women of the Wakefield Police Department and to the people of the town of Wakefield.”

Smith said that he took great pride in bringing the award back from the conference to “give it to the people who are doing the work every day and share it with the town of Wakefield.” The chief thanked the selectmen for their support.

Selectman Paul DiNocco congratulated Smith and the Police Department, noting that the CIT has “come a long way in the last four years.”

Selectman Betsy Sheeran, who early on offered her support for the CIT program, pointed out that all of the officers involved used their own time to learn and familiarize themselves with the techniques and protocols for dealing with the individuals and situations encountered by the CIT.

Smith confirmed that each member of the CIT volunteered for the extra duty, which was not required of them as a condition of employment.

Selectman Phyllis Hull congratulated Smith and the Police Department. “The citizens of Wakefield are very grateful,” Hull said, “and I’m sure they’re very proud of this award.”

Selectman Ann Santos also commended the officers and the CIT.

“It’s very easy to look at the folks that you guys are approaching and trying to help with scorn,” she said. Santos applauded them for getting to know and understand this population and by doing so, helping to keep the town safe. “A lot of people don’t know what you’ve done behind the scenes,” she said, “so hopefully this will highlight that.”

Chairman Brian Falvey agreed, stressing again that the Wakefield Police Department was one of only 10 in the entire world to receive this award.

Smith noted that one of the goals of the CIT program was to reduce arrests. As a result of what this program has done, Smith said, arrests among the population that the CIT works with are down by 80 percent.

The program, Smith said, “works as a social experiment but it also works to reduce the number of arrests.”