Melrose heads to finals after taking down Peabody, 3-1 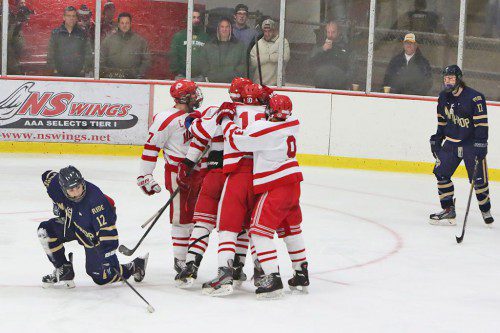 MELROSE HOCKEY picked up a 4-1 win over Winthrop on Monday at the Kasabuski Holiday Tournament. (Donna Larsson photo)

MELROSE – The Melrose Red Raider hockey team has improved to 3-1 overall (1-1 league) after beating Peabody, 4-1, in the opening round of the 2014 Kasabuski Holiday Tournament on Monday afternoon at Kasabuski rink in Saugus. At press time Melrose was scheduled to face North Reading on Tuesday afternoon in the North Final.

Melrose relied on goals from senior captain Jack Hickey (2) and senior captains Jake Karelas and Brian McLaughlin to advance. Melrose’s win comes on the heels of a victory against Medford on Dec. 23. After suffering a 3-0 loss to Arlington on the road on Saturday, Dec. 20, Melrose hopes to make it three in a row when they take on the Hornets in the final.