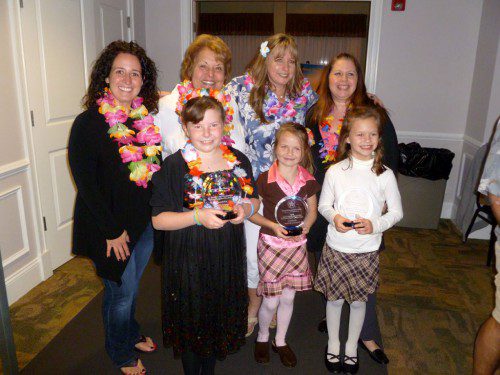 WOODVILLE SCHOOL first grade student Teagan Keon Sparhawk was one of the winners of the Spreading Smiles Award sponsored by the Mary Jo Brown Foundation, a 501c3 charity that recognizes and awards children for their selfless acts. In the front row, from left: Award winners Noelle Gregoire of Haverhill, Teagan and Riley Walsh of Carver.

Wakefield — Kindness is defined as being friendly, generous and considerate. A fourth word can also be used to define kindness — selflessness.The first three qualities are often found in children, but the fourth is rare.

But not where Teagan Keon Sparhawk is concerned. This little girl is 6 years old and a first grade student at the Woodville School where all four of these virtues are taught.

Recently, Teagan’s kindness was noticed by someone other than her teachers and classmates.  She was named one of three winners of the Spreading Smiles Award in a contest sponsored by the Mary Jo Brown Foundation, a 501(c)(3) charity that recognizes and awards children for their selfless acts.

Teagan was nominated for showing her selflessness by intervening on behalf of a little boy in her class who was being bullied. In addition, she joins her father in helping to provide foster care for dogs at their home until they can be adopted.

For her selflessness Teagan was presented with a trophy and five hours of jump time at SkyZone in Boston. She was also given a basket of toys and treats to take home for the pets she is currently fostering. The two other children who were named winners this year are residents of Carver and Haverhill.

“Teagan stood up to the bully and helped this little boy” said Sharon Bosse Macone, best friend of Mary Jo Brown for 40 years until her death from cancer in January 2012.

Macone shared insight about her friend and said that for 35 years Brown was director of admissions at Tufts Medical Center in Boston and was known for her kindness toward other people. Upon her death, the hospital named the admitting department in her honor.  A customer service award bearing her name is now given annually to a deserving employee.

“She always made sure people were taken care of and she never looked for anything for herself,” said Macone. “Mary Jo was also very family centered and after her death her daughter Christina reached out to others to form an organization to continue her mother’s legacy.”

Now, three years later, Mary Jo Brown’s legacy is spreading throughout the foundation named for her and far beyond.

Another Wakefield student was named winner of a trip for four to Disney in the first year of the Foundation’s inception — Mia Shinney, Greenwood School student and daughter of Wakefield firefighter David Shinney and his wife Maribeth.

The Brown family maintains strong ties in Wakefield as Mary Jo and her husband Tom raised their daughter here, living on Babson Street for 25 years. Christina attended local schools and is a graduate of Wakefield High Memorial High School.

A luau is held every October at the Saugus Elks to raise funds for the Foundation. This was the first year that prizes were awarded in front of the supporters. The event was held on Sunday, Oct. 19 and next year’s fundraiser is already booked for Sunday, Oct. 18, 2015. Criteria for next year’s awards will be announced in early 2015. For more information or to make a donation, visit the website at www.maryjobrown.org or visit/like their Facebook page at MaryJoFoundation or e-mail Christina Brown at  [email protected]