Has many local survivors 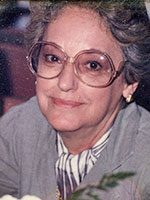 JOHNSON CITY, TN— Anna (LaRocco) DiSanto, 95, the daughter of Dominico DelCore of Capua, Italy and Mary (Biondi) DelCore of Brooklyn, NY, passed away on August. 28. She was born on Jan. 20, 1920 in New York City.

Memories and condolences may be shared with the family via www.morrisbaker.com.