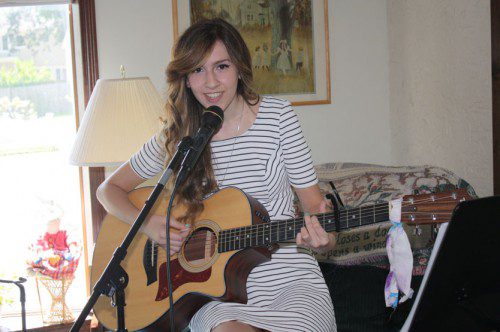 SINGER/SONGWRITER Katrina Gustafson, 16, performs her original song, “Everyday,” in her home practice space. As a Top Ten finalist in the 92.5FM Music Matters contest, “Everyday” received air time on the radio this summer and could be named the grand prize winner next week. She released her first self-titled CD this spring.       (Maureen Doherty Photo)

LYNNFIELD — If you haven’t heard Katrina Gustafson’s name in musical circles yet, you will.

At just 16, the aspiring singer-songwriter is a natural performer. Her folksy-pop vocals with a hint of a country twang remain upbeat even when her lyrics reflect the ups and downs of being a teenager.

This summer, Katrina was selected as a Top Ten finalist in the Music Matters contest sponsored by the independent radio station, 92.5FM the River and Salem Five Bank for her original song, “Everyday.”

Katrina and her parents, Gina and Marc Gustafson, will attend a ceremony at the River Music Hall in Haverhill with the nine other high school finalists on Friday, Sept. 19 during which the songs of the top three finalists will be played and the grand prize winner will be announced.

The winner will return to record the song at the River Music Hall at a future date, receiving air time on the station, just like the hundreds of legendary artists who have performed live there over the years. Additionally, if Katrina’s original song wins, a $500 donation will be made to her school’s music department compliments of Salem Five.

That’s a lot of recognition for a student who just began her junior year at Lynnfield High School. But she is relishing the opportunity to hone her craft, especially after releasing her first EP of six original songs this past spring. “Everyday” is one of those songs on this self-titled CD and was previously released as a single. She wrote the music and lyrics for each song and they’re available on iTunes simply by searching her name, Katrina Gustafson Music.

Fans can also visit the River’s website and check out the music of the Top Ten finalists. The station invites fans to vote for their favorite song via Facebook at www.facebook.com/925 the river or www.facebook.com/salemfivebank.

Regardless of the outcome, pursuing her dream doesn’t end with this contest, however. Katrina was a featured performer at the Run for the Fallen, sponsored by the Military Friends Foundation and held at MarketStreet Lynnfield this past weekend. She performed regularly at MarketStreet with additional gigs at Flatbread Pizza in Bedford this summer, which is helping her save money for her first car.

She also volunteers her time singing about once a week for the residents of Sunrise Assisted Living on Salem Street, which she loves. And, for the second year in a row she will perform at the 196th annual Topsfield Fair, which runs Oct. 3-13. During the school year, she performs with the school chorus. She is also excited to continue performing with the school’s all-girl a cappella group, Sweet Treble.

It all began with a karaoke machine received as a Christmas present from her big brother, James Roumeliotis, 28, several years ago.

“I’ve been singing since I was little, but I didn’t take it seriously until I was 11. When I was 9 my brother got me a karaoke machine and I used to sing all those crazy top hit songs,” she said. Those songs included many by Britney Spears, and her parents are thankful that Katrina really didn’t understand the lyrics. Their daughter laughs in agreement. “It’s better off that I didn’t know what I was singing.”

Katrina is a self-taught guitarist who has expanded her repertoire to include banjo, ukulele and keyboards. She has not been performing in front of live audiences for long. Aside from the occasional school-wide assembly, prior to freshman year she had only sung in front of family members.

“As a freshman I was super quiet, awkward,” she said. “At the end of ninth grade I did a coffeehouse in March and I sang ‘Red’ by Taylor Swift. I was shaking. Once I got up there it felt like a rush and I just loved it, and that’s what made me want to keep doing it.”

Gina works in the high school guidance office and credits the LHS Music Department and its coffeehouses with giving the students in both band and chorus the opportunity to “fine tune” their musical talents. “It’s great because it gets the kids comfortable in front of an audience. No matter how you sing, good or bad, the kids are so supportive,” Gina said. Katrina said that the support has been wonderful and has helped her develop new friendships.

When Katrina and her father were searching for songwriting contests this summer, the River’s Music Matters program stood out to them. “We thought that would be cool, getting exposure and also helping the music program. They’ve done so much for me, making me feel at home,” she said, adding, that choral teacher Douglas Hodgkins “made me feel really confident in myself when I performed at coffeehouses and he’s just a great person.”

She co-produced her CD with her father, an occupational therapist who is also the drummer and a guitarist in her backup band. Keeping it all in the family, her older brother Chris Roumeliotis, 30, a finish carpenter, is the band’s lead guitarist, and the professional photography for her CD was taken by her cousin, Anthony Tulliani. Other band members include a banjo player, a lap steel guitarist and a fiddle player.

Speaking of keeping it in the family, back in the early 1960s, her grandfather, Nels Gustafson, was part of a troupe of folk singers called the Au Go-Go Singers. Among them was none other than Stephen Stills who later gained fame with Crosby, Stills & Nash (and Young) and Buffalo Springfield.

“He’s a great inspiration,” Katrina said of her grandfather, who eventually left the music profession to pursue his college education.

Although she loves playing with her backup band, she is not dependent upon having them to perform as she can play acoustically, and thanks to her experience with the a cappella group, without any accompaniment at all.

Katrina’s love of country/pop music is reflected in the opening song on her CD, “Nashville Tennessee,” which she wrote to “convince my parents to take me to Nashville because I feel like it’s that place where dreams happen, so I’ve always wanted to go there.”

That dream may come true during a school field trip to Nashville later this year as well as during a future family trip.

“Everyday” is about the experience of “having your first crush, always wanting to talk to them, sitting next to them and just not saying a word. It’s the silence that kills you,” Katrina said, “You want to tell them but you don’t know if you should, so you have this idea that if you have a conversation then it will be good.”

A sampling of her lyrics tell the story: “Everyday I want to say, ‘How are you?’ Spend some time with a little rhyme if you knew. But lately, I’ve been hiding/And frankly, I’m deciding if maybe I’m right for you. You vaguely remember my name/And simply I’ve been the same/And now I know what to do. This is where the conversation starts/Occurred like a million tiny stars aligned in your eye/Everything is gonna be alright/Oh, I’ve been dreaming about this for a long, long time/Long long time, yeah.”

“‘Bigger Than They Are’ is a song about being left out, being the third wheel and it’s an awful feeling. I think it’s the worst feeling in the world,” Katrina says, explaining, “I wrote this song for others to know that they’re not alone…I know how they feel so I definitely want them to feel important.”

Her CD also includes three other original songs: “Not What I’ve Seen,” “Anything More” and “Now You’re a Heartbreak.” Social media opportunities abound and Katrina is presently enjoying an app called Vine that allows users to post six-second snippets of audio or video recordings that can be played in continuous loops. She already has nearly 4,000 followers after signing up in April with the name vine.co/Kat_sings. “Famous singers on Vine will re-vine you if they think you’re good and you’ll get some exposure,” she said. She can also be found on Twitter @katgustafson97 or Facebook.

Gina is often told by well-meaning people that her daughter should enter a high profile contest like “The Voice,” but she doesn’t want to push her in that direction at such a young age.

“She is 16 1/2 right now…We don’t want them to eat her up and spit her out. It’ll come if it’s meant to be, but in the meantime she’s doing Topsfield Fair, she’s getting paid gigs. That’s how she’s paying for her car that she has to save for.”

Her daughter agrees. “I’m not ready yet. I’m still on my training wheels.”