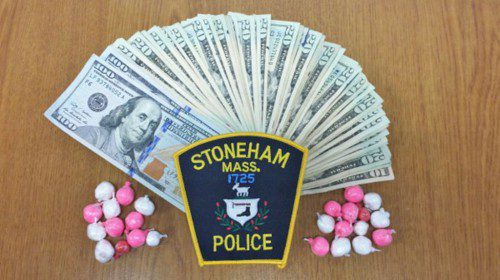 THIS IS JUST SOME OF THE cash and cocaine found in the car of a suspected dealer yesterday next to the 99 Restaurant in Stoneham.

STONEHAM —Yesterday a 28-year-old Boston woman was arrested by police in the office building parking lot next to the 99 Restaurant off Route 28 and charged with cocaine trafficking.

Stoneham Police detectives, assisted by members of the Southern Middlesex Regional Drug Task Force, arrested Yanna Hernandez-Mora, who had been the target of a heroin and cocaine trafficking investigation in Stoneham and other communities.

In a press release, Chief James McIntyre said, “We allege that Ms. Hernandez-Mora was a major supplier of drugs in Stoneham and elsewhere and I am proud to say that she is off the streets today. I want to thank our Stoneham Police detectives and our partners in the Task Force, including other neighboring police departments and the Middlesex District Attorney’s office for their diligence and commitment to the task at hand.”

On Monday afternoon, detectives were conducting surveillance of the parking lot at 2 Main St. and observed Hernandez-Mora drive into the lot. Detectives approached her Toyota Prius and reportedly located 25 bags of cocaine, weighing approximately 25 grams, on her, and $1,200 cash in the vehicle.

As a result, Hernandez-Mora was placed under arrest and charged with trafficking in cocaine. The $1,200 and the Toyota Prius were seized as well. She was taken to the Stoneham Police Department for booking and was expected to be arraigned in Woburn District Court on this morning. If convicted, Hernandez-Mora faces a mandatory minimum imprisonment of two years and a maximum sentence of 15 years.

The Stoneham Police Department expressed its appreciation of the community’s continued support in bringing information about suspected drug and criminal activity to the attention of the police. Anyone wishing to provide information anonymously are encouraged to call the drug hotline at 781-438-1215, extension 3213.