Warriors rally in third for 1-1 draw against Wildcats 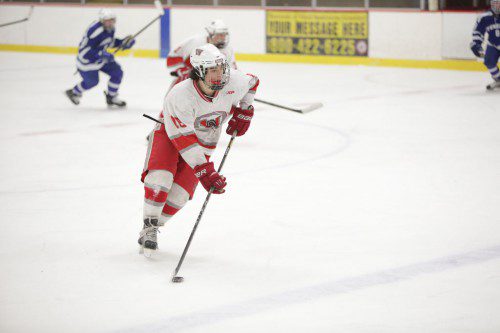 ANDREW PATTI, a senior forward, scored Wakefield’s goal as the Warriors played Wilmington to a 1-1 tie on Saturday afternoon at the Ristuccia Memorial Arena. Wakefield lost to Wildcats by a 3-1 score in the first meeting. (Donna Larsson File Photo)

WILMINGTON — The Wakefield Memorial High boys’ hockey team earned its first victory of the season last week against Stoneham. While the Warriors didn’t earn their second win on Saturday, they sure as heck came close.

Wakefield scored a third period goal and nearly had another with a shot that hit the post as it rallied for 1-1 tie against Wilmington on Saturday afternoon at the Ristuccia Memorial Arena.

Wakefield is now 1-11-4 on the season and 1-9-2 in the Middlesex League Freedom division with the point.

Wilmington is 7-7-3 overall on the year and is close to earning a state tournament berth.

“It was a great game. We played extremely well,” said Head Coach John Pellerin. “We outplayed them in the second and third periods. We outshot them 15-5 in the third had a shot hit the post with about two minutes to go.”

Freshman goalie Tyler Pugsley played in net for the Warriors and turned back every shot after that which gave Wakefield a chance.

The Warriors cashed in with a power play goal in the third period to knot the game at 1-1. Senior forward Andrew Patti tipped in a puck in front of the net. Senior defenseman Jack Brown and senior forward Bryan Noyes earned the assists.

Wilmington goalie Glenn Sullivan made 25 saves for the Wildcats, including a huge save with less than a minute left to preserve the tie.

“All three of my lines played exceptional,” said Pellerin.

“We have been in every game since the middle of January,” said Pellerin. “The kids continue to make progress with the new system. We’re in the role of spoiler now. We have Melrose on Wednesday and that will be a tough game.”

The Warriors will be the visiting team when they play Melrose for the second time this season tomorrow night at 4:50 p.m. at the Kasabuski Arena.