Warriors take on Burlington in clash of undefeated squads tonight 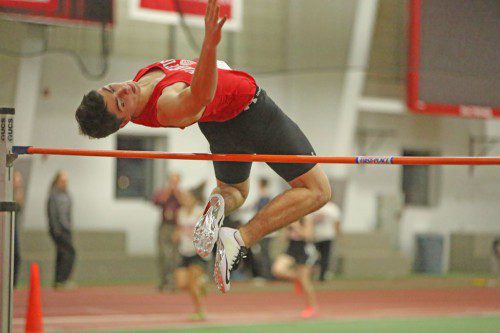 KEVIN RUSSO, a junior, competes in the high jump and is a sprinter for the Warrior boys’ indoor track team. Wakefield is scheduled to run against Burlington in a battle of undefeated teams tonight for the Middlesex League Freedom division championship. (Donna Larsson File Photo)

The Warriors ran against the Red Devils in the dual meet finale last winter with the Middlesex League Freedom division championship being the prize. Wakefield came up short in its quest as it suffered its only loss of the 2013-14 season in the division.

Now, the two M.L. Freedom division rivals meet once again and for the second time in as many seasons, the league championship will be determined by the winner.

Wakefield runs against Burlington in the fifth and final block of M.L. dual meets tonight at 5:30 p.m. at the Lexington High School Field House.

Both the Warriors and Red Devils enter the meet with identical 4-0 records. Last winter, both teams entered the meet with perfect 4-0 records in the M.L. Freedom division. Burlington won that meet by a 55-31 tally as Wakefield was the runner-up in the league.

Now, the Warriors are seeking the top spot and once again the Red Devils are standing in Wakefield’s way.

“I am really happy that our athletes have an opportunity to compete for a league tittle. They have an opportunity to bring a league championship to Wakefield, something that has not happened I believe since 1970 or 1971, right around when Reading went on their 29 year run,” said Head Coach Ruben Reinoso. “Burlington is a very good team and since the league split into (the) Freedom and Liberty (divisions), they have been undefeated.”

Also both teams have run in meets and invitationals at the state level as well to become better and improve their times.

“I know we have our work cut out for us but our athletes are ready and they are going to give Burlington their best,” said Reinoso. “I am really happy of what these guys and teams before them have done, they have put Wakefield Track and Field on the map, through their hard work and dedication. I told them the other day, you wake up every day and you are just ordinary but it takes effort to be great. I want them to really believe that if they give 100 percent in the classroom, at work, at home (and) in track and field they can really accomplish something.

“I also told them that they didn’t just wake up one day and were 4-0, they worked at it,” added Reinoso. “You don’t just win meets on meet day you win them in your preparation through the week and the preseason.”

When the preseason began in December, the Warriors saw their numbers swell to 90 athletes and has enjoyed terrific depth. Therefore, Wakefield being able to fill the 10 events hasn’t been a dilemma.

Wakefield is led by its six senior captains which include Jackson Gallagher, Joe Hurton, Ben Joly, Ed Massabni, Armin Palic and Ian Ritchie. All of the captains contributed to Wakefield’s success a year ago and are hoping finish what they didn’t accomplish last winter.

Gallagher was the 600 meter champ at the Div. 4 meet a year ago and made all-states. He leads the group of distance runners who will compete in the 600, 1000, mile and two mile.

The sprinters in the 55 meter and 300 meter dashes will be led by Palic and Hurton. The rest of the sprinters are junior Eric Chi, junior Jian Glen Gallardo, junior Kevin Russo, senior Kyle Geaney and senior Cam Yasi.

In  the field events, Russo and senior Pat Casaletto are the high jumpers. In the shot put, Joly will lead the way and is one of the top throwers in the Middlesex League. Junior Jared Regan and senior newcomer Dylan Brady add depth to the event.