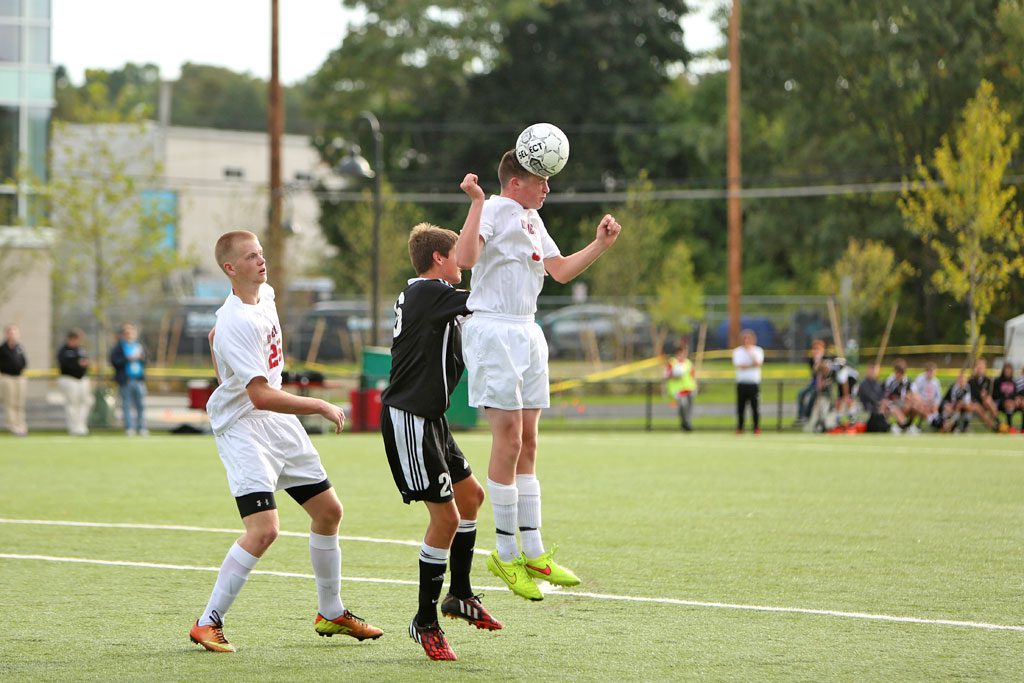 SENIOR BILLY Sheerin (right) heads the ball away from a Winchester player during last week’s upset win over Winchester. Since then, Wakefield has tied both Watertown and Belmont. On the left is junior Andrew Auld. (Donna Larsson File Photo)

WAKEFIELD — In the past week, the Wakefield Memorial High boys’ soccer team hasn’t lost a game and is in a position to make a serious run at clinching a state tournament berth.

The Warriors, after upsetting Winchester 1-0, followed up that effort with a pair of ties against Belmont and Watertown. Yesterday morning at Landrigan Field, Wakefield batted Watertown to a 2-2 draw. The tie came after the Warriors played the Marauders to a 0-0 deadlock last Thursday night at Harris Field.

Wakefield is now 5-5-3 overall on the season and 4-5-3 in the Middlesex League Freedom division. Wakefield needs five points in five games to qualify.

Wakefield’s last three games were against the top two teams in the M.L. Liberty division and top team in the M.L. Freedom division. Out of a possible six points, Wakefield took four. Head Coach Matt Angelo described this past week as the hardest stretch of the season for his team.

Wakefield continued its journey of acquiring points for a playoff berth on Monday against Watertown.

The first half didn’t go as planned for Wakefield as Watertown started very strong and controlled the game.

“They are a very strong team. They play fast and move the ball well. If you give them opportunities to finish they will,” said Angelo.

Watertown scored early and kept the pressure for most of the half. Wakefield went to halftime down 1-0.

The second half began similar to the first.

“For whatever reason it took us a while to wake up today. We were playing a half speed slower than Watertown. We will address this issue at practice Tuesday,” said Angelo.

Early in the second half Watertown scored again to make it 2-0.

Angelo called a timeout to reorganize the team. Wakefield seemed to wake up after the time out. The Warriors began possessing the ball, implementing their offense and, most importantly, establishing their physicality by winning balls in the air.

The game became very physical and resulted in a red card being issued against to a Watertown forward. With a man up, Wakefield began implementing its game.

“We play best when we possess the ball. We aren’t a run and gun team that sends ball forward and chases after it. Our biggest strength is our ability to keep the ball and break defenses down with precision passes. That’s exactly what we did when Watertown went a man down,” said Angelo.

Wakefield did exactly that. The Warriors moved the ball around Watertown, weaving in and out of gaps.

Their work paid off when Neil Fitzgerald was issued a penalty kick with 17:00 remaining. He converted making the game 2-1.

With 10:00 left, Cam Yasi scored the equalizer off a Kyle Geaney rebound.

Wakefield finished the game strong but couldn’t come away with the win.

“I’m proud of this team today. It would have been easy to pack it in after going down two goals to a team like Watertown. These boys do not quit and that’s awesome,” said Angelo. “We will use this game as a learning experience. We simply cannot afford to play one half of soccer.”

Wakefield had a few players really step up yesterday.

“Zach Dascoli was in net today for a sick Ty Strauss. It was his first varsity game for us. He was outstanding. Without a few of his spectacular saves, we lose this game. He looked like a veteran out there,” said Angelo.

“Andrew Auld had one of his best games to date. Without his ability to stop the counter attack I don’t think we get that second goal. He’s been great all year.

“Braedan Langlois was huge today. He’s only a little guy but he plays like he’s a giant. His pressure up top and physical play was great,” concluded Angelo.

Wakefield battled Belmont to a 0-0 draw on Thursday night. It was a back and forth game in which both teams had opportunities to score but strong defensive play prevented any goals.

Belmont started the game strong and really tested Wakefield’s defensive and goalkeeper Strauss. Wakefield was ready for the pressure and held off Belmont’s attacks.

Wakefield began to move the ball well midway through the first half and began to pressure Belmont.

It was a hard fought game and a tie seemed fitting as both sides gave 100 percent of an effort.

“Tonight was a tough battle. Belmont is a a very fast team with no real weak spots. We did a great job defensively shutting down their attacks and winning balls in the air,” said Angelo. “Obviously we want to win every game. But against a team like this, we will take the point.”