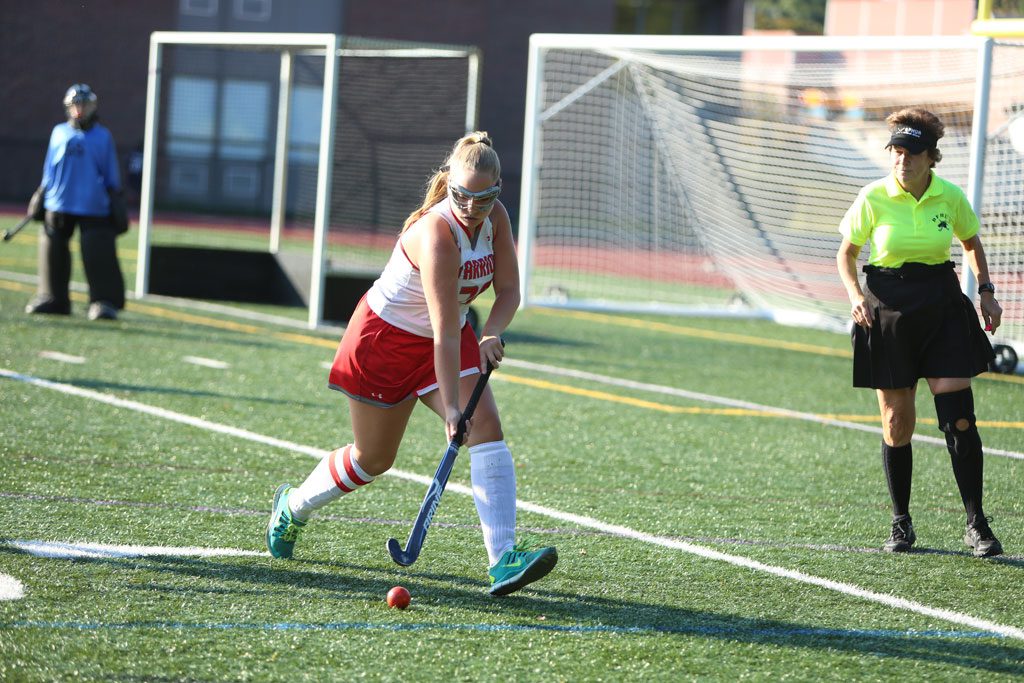 WAKEFIELD — The Wakefield Memorial High field hockey team kept its hopes of getting into the state tournament alive by defeating Stoneham, 5-3, yesterday morning at Beasley Field.

“We needed that win. We came out strong because we have to win these last five games and I told the girls, ‘You know what? You have so much potential. You need to start showing it on the field,’ and they did with their passing today. They were communicating a lot more,” said Wakefield Coach Cara Luca.

Wakefield increased its record to 4-8-1 on the season.

Wakefield came out very strong and totally dominated most of the first half. In an unusual twist, Wakefield was the beneficiary of a number of corner calls instead of them being called against the Warriors. That led to constant pressure in the Stoneham end.

“Corners are always one of our weak points right now. Offensively, we have trouble getting the ball in the net. Today, one of our goals was from a corner. Defensively, we’ve been working on it. Ever since the Belmont game the girls have been a little skittish when it comes to the ball because they kept getting nailed. So, we’ve been trying to work on that in practice, too. Right now it’s not being afraid of the ball flying out,” Luca acknowledged.

Julianne Bourque and Jill Cataldo had shots on goal off a corner and then Bourque was able to drive the ball home for a goal, with Cataldo on the assist to give Wakefield a 1-0 lead.

Wakefield doubled its lead later in the half when Bourque scored again to send Wakefield into halftime sporting a 2-0 lead.

“We needed Julianne’s goals today. I said to her, ‘Julianne you need to go out there and you need to score today right away,’ and she did, which is good. Her stick skills are great and when Stoneham scored I said, ‘Julianne just take it up the field. You can do it,’ and she went through a bunch of Stoneham players,” Luca noted.

Wakefield opened the second half with a quick goal, courtesy of Cataldo but the Spartans, showing some spunk, scored immediately afterward on a goal from Liz Kelley to make it 3-1.

Wakefield responded shortly after that with another goal, this time coming from Megan McCarthy with an assist from Marlena Nikosey.

Things calmed down for a while and then Wakefield got a goal from Olivia McGrath, assisted by Waverely Stanfield.

Stoneham began to turn the momentum its way later in the half.

“The girls took it (the lead) for granted. They had a cushion and I just said to them, ‘You can never go into any game thinking that you have a cushion because you never know what’s going to happen. Then Stoneham scored two goals in 30 seconds,” said Luca.

Erin McDermott scored for Stoneham and then seconds later Kelley scored to make it 5-3. But Wakefield was able to hold on and win the game.