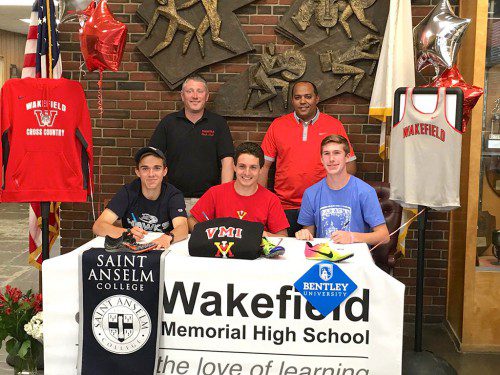 THREE WARRIORS, Ryan Sullivan (left, front), Nick McGee (right, front), and Adam Roberto (center, front) recently committed to compete at the college level after successful high school careers. In the back row are coaches Perry Pappas (left) and Ruben Reinoso (right). The three Warriors all were major contributors to the Div 4 Eastern Mass. State Championship Cross Country team as well as the 4×800 team this indoor season that went to Nationals and set the school record. They each helped the indoor team place second at the D4 State Championship by scoring in their individual events and combining to capture first place in the 4×800 relay at the same meet. They had major roles in both cross country and indoor track Middlesex League championship titles and were league all-stars for both seasons. Sullivan will become a member of the Saint Anselm’s Hawks cross country team, McGee will become a member of the Bentley University Falcons cross country and track and field teams, and Roberto will become a member of the Keydets track and field team at the Virginia Military Institute.