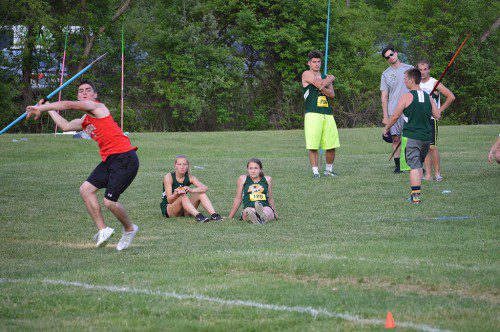 KEVIN RUSSO, a senior, won the javelin with a PR throw of 187-1 in the Div. 3 state meet on Saturday at Burlington High School.

BURLINGTON — The Wakefield Memorial High boys’ track team had two champions crowned, a host of place winners and a total of 39 points scored as it has a terrific showing in the Div. 3 state meet which was held Saturday at Burlington High School.

The Warriors also came in seventh overall in the team scoring with a total of 39 points. Host Burlington won the meet with 78 points.

“Overall we finished seventh in D3 out of 45 teams and we scored a total of 39 points which is the most we have ever scored,” said Head Coach Ruben Reinoso. “We were also well represented as we had a total of 27 kids compete between the pentathlon and D3 this past weekend. Out of the 16 events we had kids entered in 14.”

Russo’s throw in the javelin was a PR throw.

“Kevin Russo has been one of the top throwers in the state and on Saturday he did not disappoint as he had a throw of 187-1. This beat his former PR by almost 20 feet and qualifies him for the championship level at nationals. He is currently the number one thrower competing this weekend in the state. He is the highest seed we have ever had going into all states,” said Reinoso. “I am really happy for Kevin because he really worked hard in the off season in order to prepare himself for this year. Nothing makes a coach happier when you see kids putting in the hard work and also seeing the results but only because of the hard work, determination and patience of an athlete. In order to be the best you have to battle adversity and I am glad that after all he has faced he was able to compete at such a high level.”

“Rodgers led off running a strong leg at 2:01. Ryan Sullivan ran close to a personal best time handing off the baton with a 2:06. Matt Greatorex continued his strong day with a 2:02. Adam Roberto ran an exciting anchor leg as he slipped to sixth with 200 meters to go but responded in the last 100 meters by sprinting by a pack of teams and closed in on the Westwood team that was well ahead and looking to secure the victory. Roberto had other plans as he nipped the Westwood runner at the line to claim the victory by .01 getting a finishing time of 8:10.36,” said Assistant Coach Perry Pappas. “Missing out on qualifying spot in the mile (earlier) may have sparked Roberto to run a superior anchor leg in 1:59 and bring the relay team to a title. Roberto has come on strong in the past few weeks continuing to improve from week to week running some great times from the 400 up to the mile. The Warriors now have put themselves in position of qualifying for New Englands next Saturday as they will likely be in the fast heat at All States.

Wakefield had two runners medal in the mile. Greatorex came in third at 4:31.70 while Roberto, a junior, finished fourth overall at 4:32.15.

“​​The Warriors were well represented in the mile with four entrants, the most of any team in the division. What was even more impressive was that sophomore Matt Greatorex (4:31.70) and junior Adam Roberto (4:32.15) placed third and fourth respectively,” said Pappas. “Both ran personal bests despite the sweltering 90 degree temperatures. Greatorex ran a very strong second half nearly snagging second place from Bishop Feehan senior Andrew Pearl who was 0.25 seconds ahead in 4:31.45. Greatorex’ third place finish automatically qualifies him for the MIAA All State Championship meet next Saturday at Westfield State University. Roberto ran an impressive race as well as he was right on Greatorex’s heels with a four second personal best placing fourth. Unfortunately the MIAA changed the format to three automatic qualifiers rather than four qualifiers as in the past.”

In the shot put, Patrick Redmond, a sophomore, placed fifth overall with a throw of 49-2 1/2.

In the javelin, Wakefield had a total of five entrants, which is the most the Warriors have ever had entered in that event. In addition to Russo, Wakefield also had senior Alex Jancsy throw 121-8, junior Devin Shaw threw 112-9 and Mottl three 107-7 for 17th, 21st and 24th. Senior Eric Smith did not throw due to injury.

The Warriors had two entries in the 400 meter run. Brian Smith clocked in 53.20 seconds and was 14th overall.

“He finishes his freshmen year being one of the top freshmen in New England, and being the only freshmen we have ever had qualify for nationals. Joe Boudreau did not run the 400 meters in order to be fresh for the 4×400 relay,” said Reinoso.

In the two mile, there were three entrants. Senior Richie Custodio capped off his high school career with a strong finish placing third in his section and 17th overall running a season best time of 10:36.95 despite the temperatures in the 90s. Custodio will be competing for Worcester State University next year. Chris Skeldon, a senior, also finished his career with a 27th place finish running a time of 10:50.83. Skeldon will compete for Hamilton College next year. Sophomore Tommy Lucey placed 30th with a 10:58.84.

In the mile, Rodgers finished in 13th with a time of 4:43.88. Rodgers will be competing for the Brandeis University cross country and track and field program next year. Sullivan finished in 18th place at 4:50.04.

In the 4×400 meter relay Wakefield had Gallardo, junior Dan Summers, Boudreau and Brian Smith run a time of 3:37.17 and finish 11th.