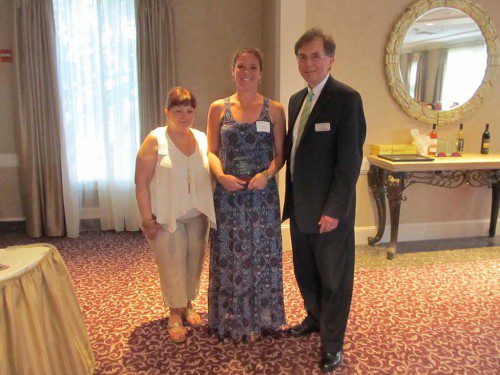 KATHRYN PRICE (center), owner of Curious Kids in Lynnfield, was presented the “New Business of the Year” award for Lynnfield at the annual meeting and dinner of the Wakefield Lynnfield Chamber of Commerce June 7 at Spinelli’s. Price is shown with Chamber co-Presidents Cheryl Carroll and attorney Thomas Mullen. (Gail Lowe Photo)

LYNNFIELD — The Wakefield Lynnfield Chamber of Commerce annual meeting and dinner was held June 7 at Spinelli’s in Lynnfield. Six business owners in both towns walked away with awards for their exemplary service and commitment to their communities. Unsung Hero awards were also presented to individuals from both towns.

Business of the Year awards

The Business of the Year award for Lynnfield went to Christine Picariello, owner of Christine’s Café and Confections.

“Christine is willing to go above and beyond and donates to all local events when asked,” said Wakefield Lynnfield Executive Director Marianne Cohen. “She provides great customer service and knows the ‘regulars.’”

The Business of the Year Award for Wakefield was presented to The Dance Studio of Wakefield, operated and owned by family members Diane Abraham, Peggy Cerullo and Susan Edson.

Cohen said that the three women have been involved in the community for 37 years and that the dance studio is “a safe learning environment” where students become more confident and poised.

Presenting the award were Ed Harding and Glenn D’Addario of HD Physical Therapy who won the same award last year.

New Business of the Year awards

Kathryn Price, owner of Curious Kids, took the top honor for New Business of the Year in Lynnfield.

“Kathryn has the best educational program for kids,” commented Cohen. “And this is coming from an educator from a high performing elementary school in New York City STEAM (science, technology, engineering, arts, mathematics) School program. The lesson plans are so creative and fun for the kids.”

Cohen called Price an “innovative and dedicated teacher” who has started her own educational programs based on STEAM curriculum for pre-school and elementary school children.

Taking the top spot for New Business of the Year in Wakefield was Early Harvest Diner on Broadway, owned by Red Rami and Jetmir Vertopi.

Cohen said about the pair, “They are an outstanding example of embracing the community where the business is located. Last year, Red Rami (and Jetmir Vertopi) partnered with the Wakefield Interfaith Food Pantry and offered a free Christmas dinner from noon to 3 p.m. to anyone from Wakefield who was alone or in need of a meal.

“They have participated in numerous events, including Blossoms at the Beebe and the Event Planning Committee’s dinner at Four Points Sheraton. Not only do they serve fantastic food, they focus on healthy and local options,” Cohen added.

“Susan has been an active member of the community and has been involved with the Event Planning Committee, Main Street Program and Saugus Watershed. She also chaired the Blossoms at the Beebe Committee. Susan is the town’s perpetual volunteer,” said Cohen.

Marilyn’s husband Christopher J. Barrett, the founder of the company, passed away in 2014. Also recognized were the couple’s four sons, Christopher, David, Michael and Gerald.

The incoming slate of officers for the 2016–17 year was also voted by the Chamber membership at the annual meeting. In addition, eight returning and three new directors were installed.

Voted as treasurer was Joyce Grasso of Wakefield Co-operative Bank.

The eight returning directors serving unexpired terms for 2016—19 are Carroll, Grasso, and Mullen as well as Suzanne Bowering, owner of Holiday Travel; Robert DiBella of The Savings Bank; Sharon Gilley of the Lucius Beebe Memorial Library; Cyndi Newell of Greenwood Wine and Spirits; and Catherine Nigro of Lakeside Inn.

After working for a trust company and small investment advisory firm in Boston, Hunt took 11 years away from her career to be an at-home mother. She served on Wakefield’s public school Strategic Planning Committee, was secretary and president of the Greenwood School PTO, served as secretary of Wakefield’s Financial Review Committee, was a member of the School Council for the Galvin Middle School, the Sunday School principal at the Most Blessed Sacrament Church and has been a Girl Scout leader.

Hunt is now a Realtor, having resumed her career in 2011, and has quickly become one of the area’s top producers. She currently works at Wakefield’s newest brokerage, North Star Realtors. She also serves as an executive board member for the Wakefield Special Education Parent Advisory Council and is a Corporator for The Savings Bank.

A Wakefield resident since 1995, Hunt lives in Greenwood with her husband of 21 years. The couple has two daughters who attend the Galvin Middle School and Wakefield Memorial High School, respectively.

Steven Merrill, who works for Four Points by Sheraton, graduated from Newbury College with an associate’s degree in culinary arts and a bachelor of arts degree in business management.

He is a Six Sigma Green Belt in the Power of Innovation section of process improvement and a certified TIPS trainer for alcohol awareness programs. He is also a Serve Safe certified instructor for the food service and hospitality industry.

Merrill began his career in the North End of Boston and worked for the Boston Park Plaza Hotel where he cooked for Julia Child, Jacques Pepin and many other celebrities, including former President Bill Clinton.

Robert (Bob) Whalen served as president of Office Specialists, Inc., a $200 million privately owned staffing services firm with 50 offices nationwide, prior to the sale of the business in 1997.

He simultaneously served as chairman and for 10 years as a member of the board of directors of the American Staffing Association, a Washington, D.C.–based national trade association. He was also a Certified Public Accountant with PricewaterhouseCoopers in the Entrepreneurial Business Group, providing management advisory services to start-up companies.

The Lynnfield native is a former member of the town’s Board of Selectmen and served as vice-chairman of the Finance Committee, the Economic Development and Housing Committee, and the School Building Committee.

A special guest at the June 7 annual meeting was David Roberts Jr., a vintner in Truro on Cape Cod, who gave a talk on various types of wine.

Roberts brought with him for sampling three wines grown in his vineyard: A 2014 Riesling, a 2015 rosé and a 2014 Cabernet franc. Those attending the event went home with a complimentary wine glass etched with the Truro Vineyards name and logo.

Sponsors of the event were The Savings Bank, First Financial Trust and Greenwood Wine and Spirits.