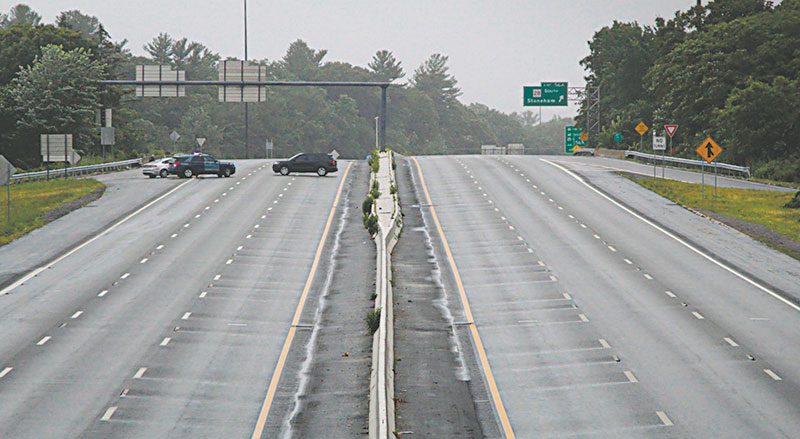 WAKEFIELD — An early morning roadside stop to refuel on Route 128 led to an anxious, hours-long police standoff with an armed group of members of a sovereign militia movement. While the incident eventually had a peaceful conclusion, it was of high concern for residents in certain Wakefield and Reading neighborhoods for a good part of the morning of a holiday weekend Saturday.

After a state trooper offered to help the men as they put gas in one of their vehicles in the highway’s northbound breakdown lane between the Hopkins Street bridge and the North Avenue Saturday around 1:15 a.m., he noticed several weapons — including long guns, rifles and pistols — and pieces of body armor. Some members of the group were dressed in military fatigues and did not comply with the trooper’s request to identify themselves.

The trooper soon radioed for assistance.

Most members of the group, later identified as the Rise of the Moors, took off into the woods and refused to come out. Not knowing what they had on their hands, police using reverse 911 alerted residents in the  Parker Road and Elm Street area, as well as those along North Avenue to stay indoors. The same was done for Reading residents who live on Ash Street.

Negotiators were brought in to talk with the group, including leader Jamal Talib Abdullah Bey of Providence, RI. Bey is a Marine Corps veteran.

Bey reportedly reassured police that his men would not be pointing guns at them and they wanted a peaceful resolution to the bizarre situation. Bey reiterated that Rise of the Moors was not anti-police. He apparently broadcast live on a You Tube page from a portion of Route 128 — which was closed between Stoneham and Lynnfield — saying that constitutional matters, federal laws and court decisions allow the group to travel through the state with weapons.

The police vigorously disagreed with Bey’s contention about weapons. During a news conference later in the day, after the 11 men had been taken into custody, State Police Col. Christopher Mason said, “You can imagine 11 armed individuals standing with long guns slung on an interstate highway at 2 in the morning certainly raises concerns and is not consistent with the firearms laws we have here in Massachusetts.”

As negotiations went on from the dark of night to the light of a rainy day, police activity picked up along North Avenue, at Vets Field, on Prospect and Elm streets and on Parker Road. Armored vehicles were brought in and ambulances stood by. Police with drawn rifles roamed nearby neighborhoods. Exit ramps were closed off. A staging area was created next to the 99 Restaurant in Stoneham.

At about 11:25 a.m. Saturday, police lifted the local shelter-in-place order.

Police have identified eight of the 11 men. Of the three unidentified, one is a minor and the others refused to comply with identification requests.

They were charged with a variety of offenses, including unlawful possession of a firearm and ammunition and the use of body armor in commission of a crime, police said in a news release issued late Saturday.

Deputy Police Chief Craig Calabrese commended the “tremendous work” by all Wakefield Police officers who were on-duty at the time of the incident as well as those who were called in. He also recognized the “massive response” by NEMLEC and area police departments.

Calabrese credited the Wakefield DPW for their assistance in setting up barricades and signs. The Fire Department also provided assistance. Town Administrator Stephen P. Maio offered any resources that the town could provide and Emergency Management Director was on duty as well. In addition, Town of Wakefield Communications Director Jennifer McDonald was instrumental in getting updates out to the public, Calabrese said.

Calabrese also thanked the citizens of Wakefield for their support and cooperation during a “very dangerous situation.”

Rise of the Moors refers to itself as a militia and said they adhere to “Moorish Sovereign Ideology,” police said.

The group told police they traveling from Rhode Island to Maine to conduct “training.”

None of the men, who were dressed in military fatigues and body armor and were armed with long guns and pistols, had a license to carry firearms in Massachusetts.

During the standoff one member of the group broadcast on a social media account of the group “Rise of the Moors” that they were not antigovernment or anti-police.

The website for the group says they are “Moorish Americans dedicated to educating new Moors and influencing our Elders.”

“This particular group, Rise of the Moors, is actually interested in that so that makes them unusual for groups within this movement,” Pitcavage said.

“I find it very ironic… that the Moorish sovereign citizen movement is so large and active, they actually repeat many theories that were actually cooked up, again many years ago, by white supremacists,” he said.

Police said the adults arrested Saturday are from Rhode Island, New York and Michigan. They will be each be held at the Billerica House of Correction on $100,000 cash bail. They are due in Woburn District Court tomorrow.

It could not immediately be determined if the suspects have lawyers.