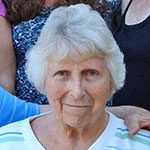 RYE, NH — Dolores A. (LeSaffre) Driscoll — mother, grandmother and advocate for youth, the disabled and the disadvantaged — passed away peacefully surrounded by the love and admiration of her family at home in Rye, NH, on Tuesday, October 13, at age 81.

Born on July 3, 1934 in Saugus, she was one of six children of the late Robert and Anna (Carothers) LeSaffre. Raised in Melrose, she graduated from Melrose High School with the Class of 1953, attended Fisher College, and received her Bachelor’s degree from Boston University in 1957. After a chance meeting on the beach in Hampton, NH and several enjoyable rides along the B&M Railroad, she fell in love with John S. “Jack” Driscoll and they were married at Most Blessed Sacrament Church on May 3, 1958.

A Melrose native as well, Jack and Dolores settled in Melrose to begin raising a family before moving their growing family of four to Topsfield. The last 15 years they have enjoyed living near the ocean in Rye, NH, and/or near family and friends in Danvers.

Along with raising her children, Dolores worked as an administrative assistant for Valtz & Kimberly in Boston for several years, and later as a teacher’s aide at Masconomet Regional Jr. High School in Boxford.

Dolores life, simple and fulfilling, was centered around her family and her faith. She was a loving wife, mother, sister, aunt, and grandmother who was happiest when surrounded by her family. Dolores lived to help others and her faith was an integral part of her daily life and routine. She became part of the faith community of LaSallette where she served as Treasurer, and encircled herself with others that became lifelong dear friends. One significant organization that she held close to her heart was the L’Arche Irenicon in Haverhill, an ecumenical residential community for people with developmental disabilities and those who assist them. Through her connection to LaSallette, she and others began supporting and volunteering their time often to make the lives of the residents better. Dolores believed that her time was better spent helping others than helping herself.

She also volunteered extensively for services for youth and the homeless, and served on the board for the Tri-Town Council for Youth and Family in Topsfield. In her heart, she believed that it was better to “live simply so that others could simply live and she embodied that phrase in most everything she did. Among her many efforts, she helped organize and prepare annually for the Christmas giving of gifts at the Lazarus House in Lawrence. No matter where she was, at home or out somewhere in the community, Dolores found ways to quietly and unsuspectingly give.

A pure soul, Dolores had the gift of making everyone around her feel special. Animals, neighbors, strangers were all drawn to her innate goodness. Beginning in her teenage years, Dolores loved spending summers near the ocean at Rye Beach. She had a special connection to Rye Beach, her lifelong friends, and neighbors throughout her life. Dolores and Jack enjoyed their social circle and dear friends in the neighborhood affectionately known as “Porch People’s Club.” They enjoyed each other and the time they shared in the salt air on each other’s front porches for many years.

When not volunteering, Dolores could be found at home knitting or quilting with her women’s prayer group that she met with weekly for over 25 years. She loved simple pleasures like spending time with her grandchildren at the beach, or watching the birds through the window at the bird feeder.

Dolores was and will remain a source of strength for her family, and her legacy will be her unassuming kindness, unconditional giving, and selfless love for others that she shared with the world.

Relatives and friends will gather in honor and remembrance of Dolores during visiting hours at the Robinson Funeral Home, 809 Main St., Melrose on Friday, Oct. 16 from 4 p.m. to 8 p.m., and again on Saturday at 9 a.m. before leaving in procession to Most Blessed Sacrament Church, 1155 Main St., Wakefield for a Mass of Christian Burial celebrated at 10 a.m.

If you wish, please honor Dolores with a contribution to one of her favorite organizations: L’Arche Irenicon, PO Box 1177, Haverhill, MA 01831, www.larcheirenicon.org.