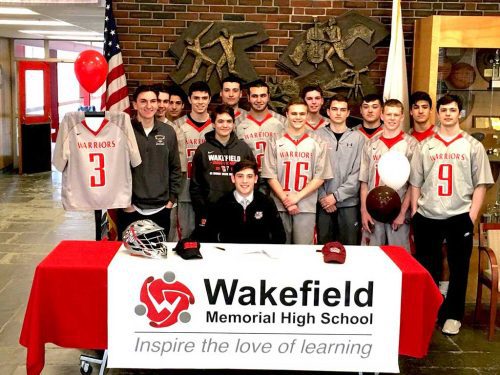 RYAN FITZPATRICK signs his letter of intent to UMass with the support of his Wakefield lacrosse teammates. (Courtesy Photo)

WAKEFIELD — In sports, there’s no greater compliment; especially in a town like Wakefield.

But to Ryan Fitzpatrick, blue-collar means much more than being labeled gritty or willing to do the dirty work. It’s an attitude; something that defines not only your work ethic and your dedication, but your ability to set that type of example for your teammates.

To Fitzpatrick, blue-collar is also about community. It’s why he stayed home at Wakefield Memorial High School instead of going to a private school, and it’s why he will be playing lacrosse at UMass Amherst.

“It’s 100 percent the blue collar feel of it,” said Fitzpatrick about why he chose the Minutemen. “I’m a tough player; I’m a tough kid. I want to be there.”

The long pole defensemen, who has helped Wakefield’s lacrosse program soar to new heights over the last four years, clearly wants to be around student athletes who are cut from the same blue cloth.

“I’ve always been a public school kid,” said Fitzpatrick. “In 8th grade, I had the opportunity to go to a private high school but I wanted to be here. It’s where my friends were; I knew the coaches. Wakefield, just like UMass, is blue collar.”

He is quick to credit those coaches and Wakefield community members for helping him get to this point. From youth coaches to varsity coaches Andrew Lavalle and Dan Flynn.

“If he would let me, I would put a full page ad in the Wakefield Item thanking John Keegan, Mike Frank and John Willis,” said Ryan’s father Bob Fitzpatrick, referencing Ryan’s youth lacrosse coaches. “They built this youth program and Ryan has been coached by some of the best coaches that you can find in a community like this, where lacrosse wasn’t the primary sport but became pretty popular. His high school coaches have been great too. Lavalle’s fantastic. Flynn, what a difference he’s made in the last couple of years. Ryan’s been very fortunate.”

Sometimes a blue-collar is inherited.

Fitzpatrick’s sense of community no doubt came from his parents. Whether it’s his mother, Roberta, going out of her way to thank a local reporter for covering a game; or his father, who when asked in the middle of the season if this felt like a culmination of a lot of hard work, responded by asking a clarifying question: “Are you talking about the team, or just Ryan?”

As for the hard work, the short answer is an obvious yes. Of course it requires hours of dedication to play division one lacrosse, which is something even his youth coaches remember.

“All-out effort. That’s Ryan,” said John Keegan. “His skills have always been good, but it’s just his compete level. It’s difficult to find someone to match it.”

“He’s committed, smart, tenacious even vicious at times,” agreed Lavalle. “We’re pulling out wins because of number 3. I’ve seen his progression over the last four years, but he’s always been a good player. He’s gotten better and gotten stronger the last couple of years and that’s what’s really helped him out.”

“We talk a lot about how a leader is not necessarily a position, a leader is an action. He’s always been a leader on this squad.”

He can thank his family, Wakefield, his teachers, coaches and teammates (or brothers, as Fitzpatrick calls them) all he wants to, but that chip and dedication to improve needs to come from within. Fitzpatrick should be an example for kids in Wakefield who want to have a similar impact. It’s what you do when nobody’s watching that prepares you.

“He asked me to put a weight room in our garage,” remembered Bob Fitzpatrick with a grin. “He was down there, where no one saw him, for the last four years lifting weights and getting ready.”

The Wakefield High class of 2018 is full of great kids. Not all of them will be playing sports in college. No matter where they go, hopefully they bring with them a little bit of what makes this town great.

Fitzpatrick will be doing a post-grad year at Williston Northhampton before joining the UMass lacrosse team in 2019. It’s not an inconvenience so much as it’s an opportunity.

“I want to have an immediate impact on the community,” said Fitzpatrick of his one year in Easthampton. “I want to expand on who I am, not even athletically just kind of socially; start to try new things, maybe take a theatre class. Just new things I’m not used to and get out of my comfort zone.”

As long as he brings that Wakefield blue-collar mentality, Ryan Fitzpatrick’s community impact will be felt.