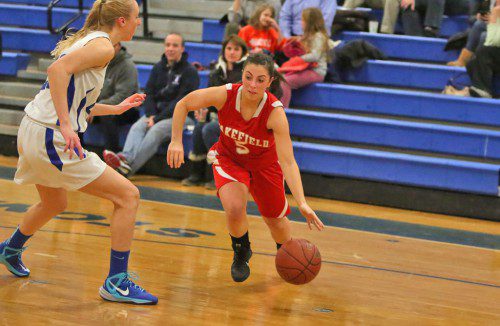 NICOLE GALLI, a senior point guard (right), scored eight points including a perfect 4-for-4 from the free throw line. Wakefield, however, came up short of a victory as it dropped a one point decision against Burlington, 47-46. (Donna Larsson File Photo)

BURLINGTON — The Wakefield Memorial High School varsity girls’ basketball team faced another tough test in the Middlesex League Freedom division as it took on Burlington Friday night on the road at Burlington High School. Despite a good effort, the Warriors dropped a one point contest, 47-46.

Wakefield jumped ahead 3-0 early on but Burlington came back and established a four point lead the Red Devils were able to maintain throughout most of the game.

Wakefield outscored its opponent 13-10 in the fourth quarter but it wasn’t enough to make up the deficit as the game ended with the Warriors falling short by a point.

With the loss, Head Coach Meghan O’Connell’s side falls to 6-3 on the season.

Senior guard Amanda Boulter had one of her two three-pointers in the first quarter and finished the game with 11 points.

Nicole Galli ran the point for the Warriors once again and finished with eight points while shooting 4-for-4 from the free throw line.

Burlington led by four to start the fourth quarter but a couple of quick hoops pushed the lead out to eight points. Wakefield fought back with a few baskets by Gabby Joly, a big three-pointer by Grace Hurley and some clutch free throw shooting by Galli.

“Down eight in the fourth quarter, the girls just never quit until they fought their way back into the lead,” said O’Connell after Wakefield’s third loss of the season.

The Warriors took this one down to the wire. With a minute and a half to go, Jillian Raso came up big with her only bucket, to give the Warriors a one point lead.

“Raso had a huge rebound and a put back to give us the lead,” the coach said.

However with less than three seconds remaining and a one point lead, Burlington called time-out and set up a play. Wakefield did well to defend the initial shot, however, Burlington’s Nicole Scola grabbed a clutch offensive rebound and put it back in for two to give the home team a 47-46 lead.

Wakefield’s last second effort was off the mark and Burlington escaped with the win.

“I was really proud of how the girls came back,” said the coach. “The girls worked really hard. It’s tough to lose by one, but you just have to look and see how you can improve for the next game.”

There won’t be much time to prepare for the next game, as the Warriors will head to Arlington on Monday to face the Spy Ponders at 4 p.m. It will be a crossover game against a team from the M.L. Liberty division.