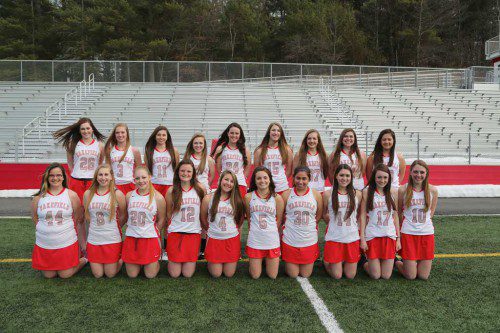 Head coach Cara Luca said that with nine returning players, expectations were set higher this year than in previous season.

“Our ultimate goal is to make it to the tournament,” she said back in March.

Looking back now, an 11-7 regular season record was more than enough to put the Warriors into the tournament.

“To make the tournament is a team milestone,” Coach Luca said in a recent post season interview. “We haven’t been in this position since 2012. Going into this season I knew I had a young team.”

Of her 19 players, just captains Gabby Raffaele and Gianna Tringale were seniors.

“Our theme this year was ‘Teamwork,’” said Coach Luca. “I was relying on nine returning varsity players to guide the new players.”

From the start of things, Coach Luca had a good feeling. She knew the kids had worked hard in the off-season to prepare for lacrosse in the spring.

“They surprised me right from the beginning of tryouts,” Luca said. “I didn’t expect them to work together like they did. I knew I had an athletic group of girls who had a common goal (to make it to the state tournament) but I was concerned about getting there. I was so impressed with the camaraderie. I haven’t seen that in years past and that is what got us to be so successful.”

This all led to the Warriors coming out of the gates swinging, giving Woburn a tough game in the first outing of the season, narrowly dropping the opener to the Tanners 13-9.

The next game proved pivotal as the Warriors displayed a never-quit mentality that led to a tremendous comeback and the first win of the year versus Bedford.

“We came back from being in the hole 9-0 and ended up winning,” remembered coach Luca of her team’s first triumph, the Warriors won 16-11.

It was the first of seven wins versus non-league competition. The Warriors went 7-0 versus teams outside the Middlesex League this year.

The true test for the Warriors would be if they could hang with some of the best teams in the M.L. After a win versus Peabody, the Warriors lost a narrow 14-11 game on the road against Lexington. It was a grueling stretch of the schedule as they had to get back on the bus two days later, this time just over to Reading. The Rockets were strong that day and the Warriors didn’t have their A-game as they took their worst beating of the year 18-1.

As the season went on, the Warriors were back on the road the next Monday as they captured another non-league win against Georgetown by a 17-11 margin.

On Wednesday, April 15 the Warriors finally returned home, only to face one of Division 2’s toughest teams, Watertown. The Red Raiders ended their season with a 14-4 record but when they came to Landrigan Field they got all they could handle from the Warriors. In the end, Watertown prevailed by a 13-8 final score, though not before being put to the test by Coach Luca’s Warriors.

After that game, things started to turn in the Warriors favor. Their record stood at 3-4 following defeat at the hands of Watertown. The next opponent, Stoneham, though weak as a program and technically running an independent schedule, is still considered a win in the record books when the teams go out and play two halves of lacrosse. The Warriors put away the Spartans 18-6, sparking the best run of form the team would hit all season. The win against Stoneham was the first of three straight victories. A road win against Medford followed the Stoneham game and that led to another tough M.L. team Arlington coming to town.

The Warriors got their marquee win, besting the Spy Ponders 9-6.

“We finally got a win from the Liberty Division,” Coach Luca said of her team’s triumph against Arlington.

The win capped off a home stand that saw the Warriors win three out of four games.

The next time out was back on the road against another strong Division 1 program, Winchester. The Warriors put up a fight in that one, but eventually were swept aside by the Sachems 17-6.

A big 22-14 win a second time out against Georgetown improved their record to 7-5 before falling to Belmont at home 18-11.

Wins against Wilmington and Bedford set up a rivalry matchup with Melrose. The two teams battled back and forth, trading goals and the lead before Melrose eventually pulled away with the 11-8 win.

The Warriors picked up another quality win against Freedom Division opponent Burlington, taking down the Red Devils 18-8.

The Warriors picked up a win in their final tune up of the regular season against Stoneham 15-5, as they looked ahead to their tournament showdown with Woburn.

“All their hard work paid off,” Coach Luca said, reflecting on a successful regular season that resulted in their first tournament berth since ‘12. “Give credit to the team and coaching staff for always being positive, persevering and taking the season day by day.”

The Warriors came up short in their tournament game against Woburn falling 15-2 but that didn’t dampen a truly impressive season for this group of young Warriors.

“Working together and not giving up on each other helped us be successful,” the coach said. “Another reason we were so successful is that the girls worked in the off-season with each other and developed a special bond.”

The results showed with the 11-7 record and several players received individual accolades for their efforts.

With 79 goals and 26 assists, Kelsey Czarnota led the team in both statistical categories in her sophomore season.

During her postseason interview, Coach Luca was asked to briefly peer into the future and give a quick glimpse of what to expect for next season.

“Next season is going to be great,” she said. “Like I said before this team is young. We only had two seniors (Raffaele and  Tringale). I expect the girls to come back wanting the tournament even more. We will prove that we deserve a spot in tournament play. The girls will be working in the off season and will come back even stronger.

“I will have 17 returning varsity players and 10 of them were starters last season. Yes that’s a lot but each of them contributed to a successful season,” added Luca.

In her final thoughts on 2015 coach Luca said, “The lasting memory of this group is their drive to be the best and their kind hearts. They wanted to learn, they wanted to win.”

The Warriors won 11 times this year and had a very successful season. They are hoping for more success next spring.