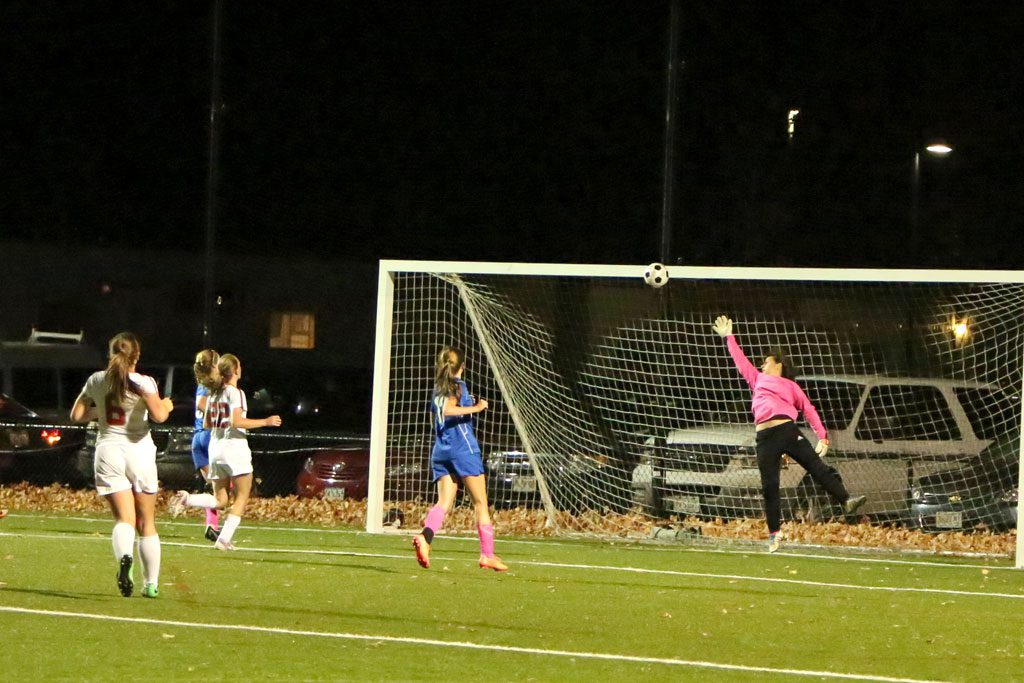 SENIOR STRIKER Meghan Chapman (#6) scored the third goal of the game with a shot that was too high for senior keeper Kaylie Sapienza (far right) to handle. The Warriors prevailed by a 3-1 score over Georgetown to clinch a state tournament berth. (Donna Larsson Photo)

WAKEFIELD — A tie would have been sufficient but the Warrior girls’ soccer team wanted a whole lot more.

Wakefield put an exclamation point on its second half turnaround as it clinched a state tournament berth with a decisive 3-1 triumph over Georgetown in a non-league game last night under the lights at Walton Field.

The Warriors, which blanked Burlington 1-0 last Wednesday afternoon as well, increased its overall record to 9-7-1 and 8-7-1 in the Middlesex League Freedom division. The Warriors clinched a postseason berth with a game to spare as they face Gloucester tomorrow night in the regular season finale in Gloucester.

Wakefield also has posted a 6-1-1 in its past eight games and is riding a wave of momentum. Prior to that, the Warriors had a 3-6-0 record and were struggling. But they have put it all together in the second half of the season and will be playing in the state tourney once again.

“We’re hugely happy with the win,” said Coach Jessica Iosua. “We wanted to win this game and not get the tie. I was happier with our play in the second half of the game. Physically and mentally, we didn’t let them run through us and step around us. We were able to make our runs and make our shots.”

The scored was tied at 1-1 at halftime but the Warriors broke through in the second half with two goals while limiting the Royals’ scoring bids. Seniors Jillian Raso and Meghan Chapman stepped up and tallied the two goals which lifted Wakefield to the victory.

It was only appropriate the seniors stepped up on Senior Night at Walton Field as the Warriors played its final regular season home game. Raso, Chapman, Meghan Guarino, Nicole Amalfitano, Kayla Geaney, Kristina Redmond and Nicole Galli were the seniors honored.

Raso’s score at the 28 minute mark wound up being the game-winner. Raso collected a loose ball on the right side and sent a shot which settled inside the left post for a well-executed and sensationally placed shot. There was nothing Georgetown’s goalie Kaylie Sapienza could do on the play.

“Jill Raso is a player, when she squares for that shot for the far post on the run in that scenario, she scores,” said Iosua.

Chapman gave Wakefield an insurance goal with about a minute left in the game. The senior striker settled the ball down outside the 18 yard line and ripped a shot that rocketed by Sapienza to give Wakefield the two goal advantage which wound up being the margin of victory.

Junior midfielder/striker Grace Hurley scored Wakefield’s first goal of the game at 12:10 of the first half. Hurley collected a rebound at the left post and kicked it into the net which gave the Warriors at 1-0 lead at that point.

The Royals tied the game at 1-1 at the 20 minute mark of the first half. Junior midfielder Jennifer Migliaccio was open at the left post on a scramble in front of the net and she knocked home the ball to put Georgetown on the scoreboard.

Despite giving up the goal, senior keeper Redmond played a sensational game. Redmond faced six shots in the first half but a couple of them were quality chances. Redmond denied senior midfielder Jennifer Killian on a point blank in the early minutes.

The Warriors then controlled much of the possession and scored their goal. However in the second 20 minutes of the first half, the Royals created some more chances. Sophomore forward Veronica Geberth took a shot from about 18 yards away. The shot went off the crossbar. Right after the shot ricocheted to another Royals player, Redmond was there to make the save.

As a result, the teams were tied at 1-1 at halftime. That changed in the second half as the Warriors took control of the game and outshot Georgetown, 8-0.

“I thought Mia Joyce (midfield/defense) took a few hits (fouls) but was able to rally and had one of her best halves all-around this season,” said Iosua. “Nikki Galli also took a few hits but she rallied as well. One of the strengths of this team is that when a couple of calls don’t go our way, we can regroup.

“We missed six opportunities to score in the first half and we need to work on that,” added Iosua. “We have scored a lot of goals lately. We won 1-0 against Burlington (last Wednesday). It was tough coming back the next day and the conditions were miserable. I was happy we were able to leave there with the win.”

The finishing touch and shoring up the defense has contributed mightily to Wakefield’s second half turnaround. While no coach wants to see their team start off slowly, Iosua has been very pleased with the Warriors’ ability to turn its season around.

“We needed to turn it around and we have benefitted from it,” said Iosua. “We now understand that you need to erase what just happened and move on. We have gained the experience of moving forward and it will only make us better.”

Wakefield has one more regular season game and it will seek to head into the tournament on a roll. The Warriors take on the Fisherwomen tomorrow night at 6 p.m. in a non-league contest at Gloucester High School.