Warriors edge out Belmont by one shot for trophy 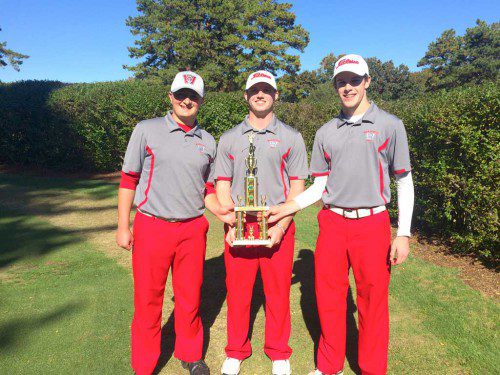 THE WARRIORS won the Middlesex League Shootout in golf and took home the three-man trophy. From left to right are Mike Guanci, Dylan Melanson and David Melanson.

STONEHAM — The Middlesex League Shootout in golf was nearly cancelled for good due to a rainout on Oct. 1. It was a good thing for the Warrior golf team that the event wasn’t and was made up yesterday morning.

Wakefield took full advantage of playing on its home course as it captured first place in the team scoring with 236 points. The Warriors edged out Belmont (237 points) by one shot for the title.

The format for the shootout was 18 hole medal play.

Mike Guanci, a junior, had Wakefield’s low score of the day with a 78. Meanwhile, the Melanson cousins, Dylan and David, both shot a 79. Dylan is senior co-captain and David is a junior.

The low score of the day was a 76 and that was achieved by four golfers from Belmont, Lexington, Stoneham and Melrose. Melrose’s Mike Shea was the overall winner on the tiebreaker.

Next was Guanci and a Wilmington golfer as both shot a 78.

After that, Dylan and David Melanson both shot a 79 as all three Warrior golfer were among the top 10 individual scorers.

“What a great day for Wakefield golf,” said Coach Dennis Bisso. “This is the first time we’ve won the Middlesex League Shootout. All three boys played terrific. We squeaked out a one shot win over a very good Belmont team. There are some very good teams in the league.

“This the first time we won the three man trophy,” continued Bisso. “I’m pretty proud of them. The golfers in the program have worked so hard on our way up over the past four to five years.”

Wakefield will now get ready for the Div. 2 North Sectional Qualifier which will be held on Monday at Hillview Country Club in North Reading. There will be a 9 a.m. shotgun start.