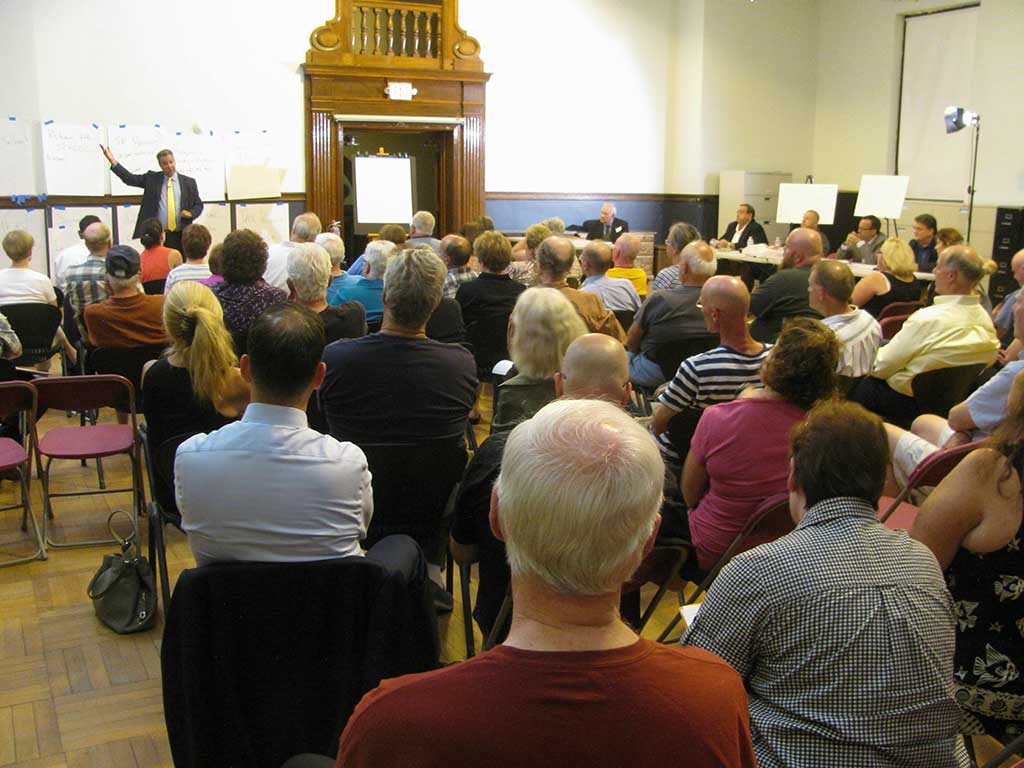 MORE THAN 100 residents turned out for last nights forum on possible reuses of the vacant Hurd School. (Mark Sardella Photo)

WAKEFIELD — Artist studios, adult education center, senior housing, recreation center, historical museum, performing arts center or swing building for use while other town buildings are rehabbed. Those were just some of the ideas put forth at a public forum last night on the possible reuses of the vacant Hurd School on Cordis Street.

About 100 people roamed the halls and classrooms of the old school before assembling in the Hurd School auditorium to brainstorm ideas for the building’s future.

Town Administrator Stephen P. Maio facilitated the discussion. Maio has talked about the possibility of selling the school to a developer or other entity for as much as $1 million as part of a new capital plan for the town. But Maio admitted last night to harboring a soft spot for the school, having attended elementary school at the Hurd.

A former neighborhood elementary school, the F.P. Hurd School was built on Cordis Street in 1899. It closed as a public school in the early 2000s. The School Department declared the building surplus in 2005 and turned it over to the town.

In 2009, after Our Lady of Nazareth Academy closed its school on Winship Drive, a group of parents got together and leased the Hurd School from the town for a school they called “Nazareth Academy.” Earlier this year, Nazareth Academy announced that it was closing to join with the fledgling Academy at Penguin Hall in Wenham, another school in the Catholic tradition. The Hurd School is once again vacant.

After making some brief opening remarks, Maio opened the session up to hear residents’ ideas for possible reuses for the building.

Deborah Butler of Main Street said that she would like to see the school reused for educational purposes. She observed that the town’s population is growing as parents are going back to having larger families. She noted that the town can’t afford to build more new schools so she advocated “being creative” and reusing the building for education. She mentioned the possibilities of a pre-school, a school for the deaf or a charter school.

“Once we give up this land, we give it up forever,” Butler cautioned.

Bob McLaughlin of Water Street said that he was “opposed to getting rid of town property.” He recalled the vacant Montrose School was used as a swing building to house the Police Department while the Public Safety Building was being overhauled. He said that using the Hurd as a swing school would be cheaper than renting temporary classrooms when rehabbing other schools. If not used as a swing building, McLaughlin said he would like to see the Hurd used as senior housing.

Cindy Schatz of Cordis Street said that the building would be a great location for an arts community where classes and music recital could be held.

John DiTonno of Central Street suggested moving the Wakefield History Museum from the West Ward School to the Hurd. With the additional space, more historical artifacts could be on permanent display, he said. The town could then sell the West Ward School, he said, or move it to the rear of the Hurd School.

David Connor of Cordis Street suggested using it as storage space for the DPW or as temporary classroom space if the town decides to build a new High School.

Annemarie Cardosi of Pleasant Street advocated using the Hurd as a swing school while work is being done on the Walton or Greenwood School. With plenty of parking, she said that it could also be used as art studios or for adult education classes.

“The building is in beautiful condition,” she said. “I’d love to see it used by the community.”

Bob Curran of Forrester Road pointed to the hardwood floors in the auditorium and said the space could be used by youth basketball.

Doug Butler of Main Street noted that the town is in better financial shape than it was when it sold off some other buildings in the past. “I would like to see town buildings stay in town ownership,” Butler said. “We don’t need the money right now.”

Eric Savage of Cordis Street said that he would prefer see the building sold and have the building generating tax revenue or used for some other purpose that produces revenue for the town.

Ami Wall of Elm Street said that she would like to see the building used for youth recreation or adult classes.

John Carrick of Pleasant Street said that small companies are often looking for office space. He suggested looking for a business that would be interested in leasing the building.

DPW Director Rick Stinson said that the Hurd building was in “pretty good shape.” He did note that if the roof needed to be replaced it would cost $300,000 – $400,000. He said that the heating system needs work and the basement has had flooding problems in the past.

The closest abutter to the school, Jim McBain of 23 Cordis St. said that the building had not been maintained as well as it might have been. He said that it was easy to toss around ideas, but any reuse of the building by the town would mean investing up to $120,000 for an elevator to address handicapped issues. He also noted that the building is not air-conditioned.

“If you’re serious about using it for these activities you’re going to have to spend money,” he said.