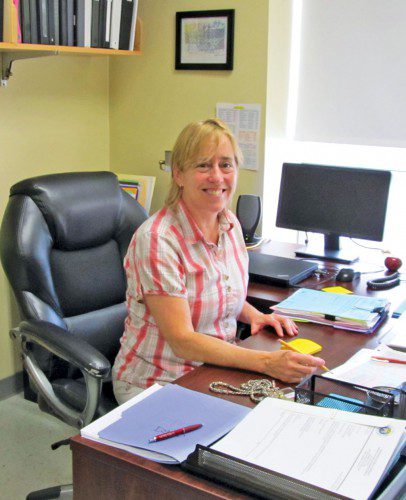 WAKEFIELD — School board members were in unanimous agreement last night that incoming Superintendent of Schools Dr. Kim Smith should receive $168,000 in annual salary compensation, pro-rated.
Her contract will begin on Monday, July 6 and end on June 30, 2018, with a 2.5 percent salary increase cap per year.
The pro-rated amount, said school board Labor Relations Subcommittee Chairman Thomas Markham III, was calculated on the basis that Smith will work three days fewer than a full 12-month period, since current Superintendent of Schools Dr. Stephen K. Zrike will remain on the payroll until Friday, July 3.
In addition to the $168,000 annual salary, Dr. Smith will receive 20 vacation days and 15 sick days. She will not, however, receive an annuity, a retirement savings vehicle that Dr. Zrike negotiated two years ago when he and the school board were discussing his compensation package.
“It was unusual for us to give him the annuity but he and Dr. Smith are at different points in their lives,” said Markham.
Markham further stated that the salary was in line with what other communities similar to Wakefield are paying their school superintendents.
“I’m comfortable with making this salary recommendation,” said Markham. “There will be no need for salary transfers. The $168,000 has already been budgeted.”
He added that due to the reduction of vacation days paid to Dr. Smith and the fact that there will be no annuity represents a savings to the school district. (Dr. Zrike’s compensation package included an additional five days.)
“I believe this is a decent, fair and good contract,” he said.
Member Anne Danehy added, “We’re in great shape to have Dr. Smith step in.”
During her public acceptance of the contract, Dr. Smith thanked the school board for their confidence in her and acknowledged Dr. Zrike.
“He has given 100 percent of himself since he came to Wakefield. He is leaving an indelible, enduring mark that will last a long, long time.”
Smith pointed out Zrike’s successes, including the Early Childhood Center at the Doyle School, free full-day kindergarten and right-sizing the district.
“Holyoke has no idea how lucky they are,” said Smith.
She assured school board members and people in the community that she will maintain an open door policy and that though she knows many people in Wakefield, there are some she does not know but would like to get to know them.
“You have my integrity, work ethic and commitment to excellence,” she said. “Once I have my eyes on the prize, my eyes on the goal, I’m pretty relentless.”
In turn, Dr. Zrike praised Smith. “I’m actually jealous of her many talents and accomplishments,” he said, adding that the district would be in good hands.