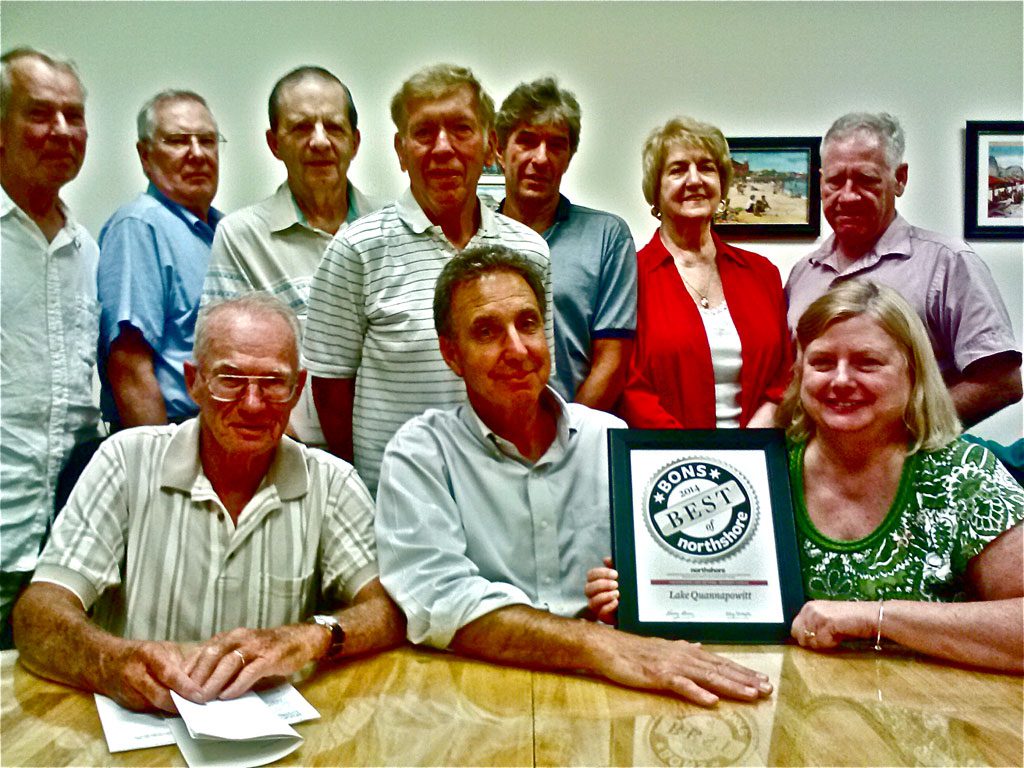 CELEBRATING THE “Best of North Shore” award for “Best Lake” are Friends of Lake Quannapowitt board members. In the front row are Jim Scott, Bill Conley (President) and Leeila Given. In the back row are  Joe Twichell, Jim Murphy, Bill Butler, John Anderson, Doug Mildram, Mary Salois and Ed Spaulding.

WAKEFIELD — The Friends of Lake Quannapowitt (FOLQ) is celebrating the recent recognition of the Lake by North Shore Magazine. Following online votes by over 37,000 readers, Lake Quannapowitt was selected as “Best Lake on the North Shore—2014” in the magazine’s annual contested awards.

Lake Quannapowitt is Wakefield’s most distinctive feature, and with 3.6 miles of shoreline is a great place to walk, run or bicycle. Residents of the area are familiar with the many events and fundraisers held on the Common. It has become a regional recreational destination for walkers, kayakers, windsurfers, children enjoying playground equipment, as well as those seeking quiet repose on the many memorial benches surrounding the Lake.

People within Wakefield have long been aware of the Lake’s importance. “The town and the Lake are really combined and integrated,” notes Doug Heath, local Lake advocate and scientist. “You can’t speak of one without referring to the other.”

Now, this most recent award demonstrates the importance of the Lake to the larger north-of-Boston region.

The Lake is fundamentally a gift of nature. However, it is people and organized efforts that work to optimize its environment, which is constantly vulnerable to degrading pressures. Much credit goes to the Wakefield Department of Public Works for the basic care of the Lake area. Additionally, the Friends of Lake Quannapowitt works constantly, through many programs and initiatives, to preserve and enhance the Lake’s water and its surroundings. “We are proud of the many contributions made by FOLQ members and volunteers which allow for such lovely vistas and recreational surroundings at one of the town’s greatest assets,” notes Bill Conley, newly-elected president of FOLQ.

FOLQ, which was founded in in 1991, is a non-profit community organization. composed of several hundred dues-paying members concerned about the Lake. It is dues from those members, volunteer time and enhanced community awareness that helps protect the Lake as a recreational resource for the North Shore region.

FOLQ encourages all people who get something from the Lake to also become members and contribute moderate dues to this important community effort. And of course, volunteered time is also highly valued. To join or volunteer, contact FOLQ through their website folq.org, or through voicemail at 781-979-2400.

The plaque citing the award for Lake Quannapowitt can be seen in the office of the Chamber of Commerce at the Americal Civic Center.