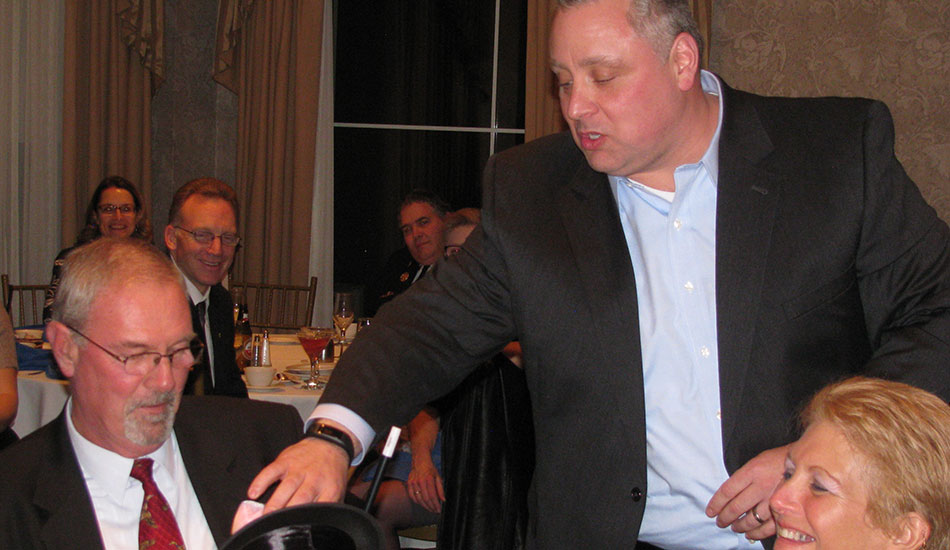 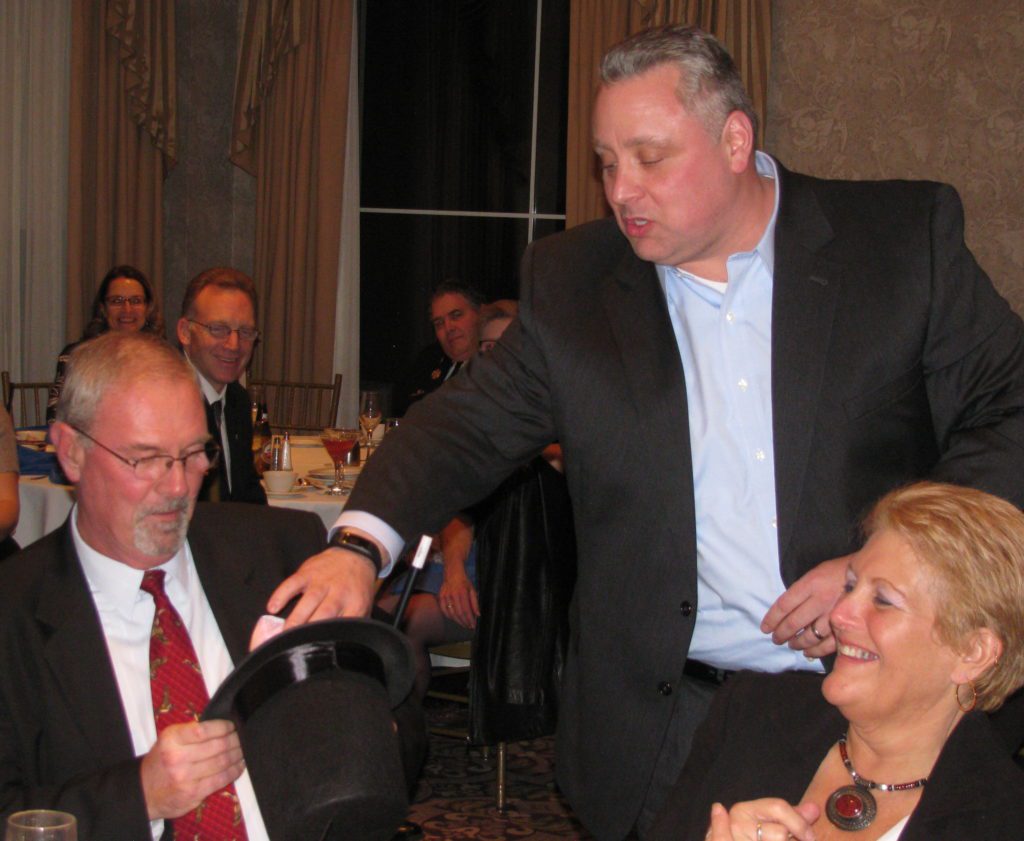 FORMER FINANCE COMMITTEE Chairman Jack Dahlstedt (at right) presented late Town Administrator Bill Gustus with a magician’s hat and magic wand in honor of his wizardry on behalf of the town during his January 2015 retirement party. Gustus passed away on Sept. 19 at the age of 69. (Mark Sardella File Photo)

LYNNFIELD — Late Town Administrator Bill Gustus is being remembered for his dedication to the Lynnfield community.

Gustus passed away at his Lunenburg home on Monday, Sept. 19 at the age of 69. He served as town administrator from December 2002 through January 2015.

“Bill served as town administrator for 12 eventful years, which saw the completion of the school building project, the Senior Center, the approval of the MarketStreet project, meeting the town’s affordable housing obligations, the acquisition of two golf courses and improving the town’s financial status, evidenced by the achieving of the AA+ bond rating,” said Select Board Chairman Phil Crawford during last week’s meeting. “He was a profound strategic thinker who cared deeply about this town, its employees and its residents. He was a good friend to many of us, and served the town of Lynnfield well. He has a very large family, and has wonderful kids and grandkids. I feel very sorry for them. Bill was a great guy who is greatly missed. Our thoughts go out to his wife Laura, his children and his grandchildren.”

“I feel terrible that Bill passed away,” said Bourque. “He was a phenomenal leader and Lynnfield is a better town because he worked here for so many years. There were so many projects that would never have been completed without him. The school, fields and MarketStreet projects are critical parts of what makes Lynnfield the community it is today.”

Bourque said Gustus guided the town during some very challenging budget years, and spearheaded the creation of the town’s rainy day fund.

“I worked with Bill on everything,” said Bourque. “He was a good communicator and was one of the smartest people I have ever worked with. He could take an idea, and would give six possible solutions to a problem. He was an incredibly bright guy. He brought a lot of private sector thinking and principles to the way the town operates.”

Former Selectman/current Historical Commission member Bob MacKendrick worked with Gustus during his three terms on the board as well as when he served as assistant fire chief.

“Bill was a great guy,” said MacKendrick. “He was very sharp, and always had best interest of the town and townspeople at heart. He did a really good job while he was here. I was assistant fire chief before I joined the board, and I worked with him on budgets and administrative issues along with the chief. I always found him to be straight forward and honorable. He will certainly be missed.”

Assistant Town Administrator Bob Curtin recalled that Gustus hired him as the assistant to administration in 2009. Curtin previously covered Gustus while he worked as a newspaper editor for a rival publication.

“Bill was a brilliant thinker who had the heart of a regular guy,” said Curtin in an email. “He was one of the most creative problem-solvers I have ever met. It was not unusual to receive something well into the night via email from Bill, a multi-paragraph treatise on some issue that was vexing the town at the time. His background as former corporate counsel for Cummings Properties made him the perfect point person for negotiating with National Development during the MarketStreet approval process. His forward-thinking helped shape the town, and it’s a rare week that I don’t think of one of Bill’s favorite maxims such as ‘don’t sweat the small stuff’ and ‘we’re all a package deal.’”

Town Accountant/Assistant Finance Director Julie McCarthy said she was “very fortunate” to have Gustus as a boss for 12 years.

“Bill was a very smart, humble and gracious man,” said McCarthy. “We shared a passion for municipal finance. Bill really taught me how to think strategically about things. He always made himself available to listen without judgment, and offered sound advice. I really think of him as a mentor as I developed as a young municipal finance professional. I am forever thankful for all that I learned from Bill during his tenure in Lynnfield. He will be remembered for all of his accomplishments in Lynnfield for many, many years.”

Select Board member Dick Dalton recalled that he worked with Gustus while he served on the Planning Board.

“We should never forget that Bill was the driving force for a lot of the good things that happened in town over the last couple of decades,” said Dalton.

The Select Board held a moment of silence in Gustus’ memory at the start of last week’s meeting.

Crawford, who worked with Gustus for a year-and-a-half on the Board of Selectmen and five years on the Finance Committee, recalled that the town hosted a retirement party for Gustus at Spinelli’s in January 2015.

“It was more of a roast than a retirement party,” said Crawford.

Gustus co-owned the nine-hole Settlers Crossing Golf Course in Lunenburg and the 18-hole Westminster Golf and Country Club along with his wife, Laura, and Lynnfield Golf Director Donnie Lyons.

Lyons recalled that Gustus hired him as Lynnfield’s golf director in 2005. They purchased Settlers Crossing in November 2012 and the Westminster Golf and Country Club in January 2018.

“We were very good friends as well as business partners,” said Lyons. “We were able to make golf better in Lynnfield. He was instrumental in convincing the town to buy the Reedy Meadow Golf Course to protect it from housing. People forget that it wasn’t about buying the golf course. It was about protecting the town from massive development after the school projects had just been completed. He worked out a deal with National Development to get the extra land they couldn’t do anything with for MarketStreet, which is now the King Rail Reserve Golf Course. Both courses are funded by an enterprise account, so we don’t cost the taxpayer any money. He spearheaded that.”

Lyons said Gustus was a dedicated family man who cared deeply about his wife, nine children and 13 grandchildren.

“He always took care of other people,” said Lyons. “Bill’s passing is very tragic. I lost a dear friend.”

In addition to serving as Lynnfield’s town administrator for 12 years, Gustus worked as the chief administrative and financial officer for the town of Lunenburg. He also worked as the general counsel for Cummings Properties and served as the city of Gloucester’s CFO.