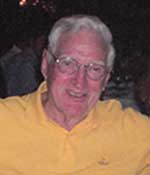 WINCHESTER — Leo C. Turner Sr., 98 passed away at the Aberjona Nursing Center in Winchester on Oct. 28.

Leo was born at home in Melrose on June 22, 1919 to the late William and Mary (Curran) Turner. He was raised in Melrose, graduated from Melrose High School, Class of 1938, where he excelled in sports. He played hockey, baseball, football and track and was a 14 letter man. He continued on after high school playing hockey in the junior Olympics and played semi-pro baseball and was inducted into the Melrose High School Hall of Fame. He served in the U.S. Army during World War II.

Mr. Turner starting working for the B&M Railroad in 1938 and worked as a purchasing agent for over 40 years retiring in 1979. Leo was an avid Red Sox fan and was so thrilled when the Red Sox won the World Series in 2004. He was an avid golfer, enjoyed playing at Mount Hood Golf Course in Melrose and was a member of the Mount Hood Park Commission for 20 years. Leo and his wife Margaret enjoyed spending winters in Boynton Beach, Fla., traveling to Spain, Ireland, Europe and they took numerous cruises on the Norwegian Cruise Line. Mr. Turner was a wonderful father, grandfather, great-grandfather and a dedicated husband to his wife Margaret, and was always by his wife’s side every day faithfully.

Leo was the beloved husband of 74 years to Margaret E. (Lux) Turner. He was the loving father of Kathleen Devir and her husband Jim of New Hampshire; Michael Turner and his wife Cheryl of Melrose; Cindy Lux and her partner Michaela of Brighton; Robin McDonald of Wrentham; and the late Leo “Chris” Turner Jr. He was the cherished grandfather of Kim, Karen, Mark the late Mike Jr., Casey, Ry, Maggie, Sam and Julian. He was the proud great-grandfather of Stephen, Jessica, Jack, Madelynn, Ty and Brennan. He is also survived by several nieces and nephews.

Visitation was held at the Gately Funeral Home, 79 West Foster St., Melrose, on Thursday, Nov. 3, followed by a Mass of Christian Burial at Incarnation Church, 425 Upham St., Melrose. Burial with Military Honors took place at Wyoming Cemetery in Melrose. In lieu of flowers, memorial contributions may be made to a charity of your choice. To send a message of condolence, please visit www.gatelyfh.com.