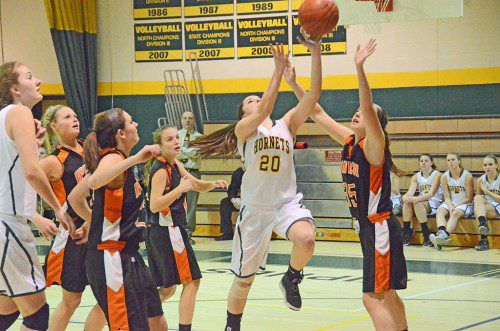 The Lady Hornets downed the visiting Ipswich Tigers 57-48 on February 11th. Junior Jess Lezon had yet another double-double with 21 points and 16 rebounds. Junior Carly Swartz added 12 points and in her return to the starting lineup from injury and senior captain Adrianna Flanagan scored 11.

North Reading got off to great start jumping out to a 9-2 lead a little over halfway through the first quarter. After a late basket from sophomore Katerina Hassapis the Hornets headed to the second quarter maintaining a 15-8 lead.

North Reading expanded the lead to 10 with just over two minutes remaining in the first half and it looked like it would be a double digit score line at halftime. But in the final minute Ipswich responded with a 9-2 run and cut the lead to 25-22 at the half. 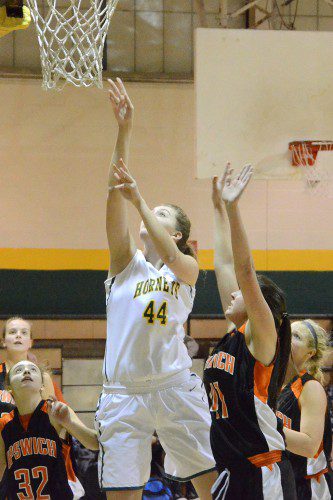 The Hornet offense came out of the locker room on fire. They scored 14 points in the opening three minutes of the third and the lead ballooned to 39-27. The Tigers did battle back to within six by the end of the quarter.

It was a battle in the fourth. Ipswich got to within one point 46-45 with 3:13 remaining on the clock. Fortunately North Reading outscored the Tigers 11-3 the rest of the way and went on to the nine point win.

The 6th ranked Pentucket Sachems showed why they are considered one of the best teams in the state, crushing the Hornets 65-31 on Friday night. Jess Lezon was the only Hornet in double figures with 10 points.

North Reading took an early 2-1 lead at 7:13. But the lead didn’t last long. Pentucket closed the first quarter on an 18-1 run and took a commanding 19-3 lead after one. The Hornet offense improved in the second quarter but they couldn’t contain the Sachems. The lead was 36-16 at the half. Nothing changed in the second half. Pentucket coasted to yet another victory.