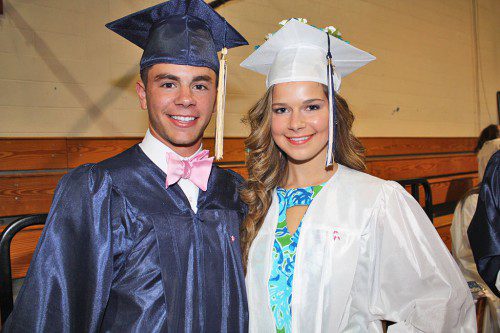 MARC BUDD, Grace Leman and all their classmates wore a pink ribbon pin with a white dove on their graduation gowns to honor the memory of classmate Gianna Dias, who died of cancer prior to her sophomore year. Budd wore a pink bow tie in her honor too. (Maureen Doherty Photo)

LYNNFIELD — Under clear blue skies and with a cool breeze in the air, 152 members of the Class of 2015 said goodbye to Lynnfield High School and stepped into the future on Friday, June 5.

The school’s 56th graduating class basked in the glory of its accomplishments during commencement exercises at Pioneer Stadium, held there for the first time since the LHS fields project was completed last fall. High School Principal Bob Cleary said the Class of 2015 was “very excited” to say goodbye to their high school careers by graduating at Pioneer Stadium.

Leman congratulated the Class of 2015 on “completing the first of many chapters.”

“Although we must cherish the memories we made over these past four years, we must appreciate the magnitude of our achievement and the imminent potential each of us possess,” said Leman. “Now sitting together as a class for the final time, we must reflect on the profound influence each of us has had on one another. Never could any of us imagine the obstacles we would have to overcome, the hard decisions we would have to make and the lessons that we have learned from our mistakes.”

Scollard said graduation is not only a time to look back on the past, but an opportunity to look into the future.

“We have such great potential at this very moment, and are warranted in looking forward to molding a life out of it,” said Scollard. “And as we do, remember that when our life paths diverge, we will all remain permanently bonded by our time at LHS and our experiences. No life event can take away what we’ve learned here.”

Cleary provided some brief remarks following Leman and Scollard’s speech. He said the Class of 2015 has “been through a lot together.”

“They have experienced great success and they have also experienced great loss,” said Cleary. “But through it all, they have worked together. They have been there for one another and managed to persevere. I think the greatest lesson we can teach our children is perseverance. A lesson that teaches no matter how many wins you achieve or how many losses you suffer, you still rise up to meet the next challenge. This class has shown their perseverance time and time again.”

“I personally feel extremely lucky to be a part of the Lynnfield Class of 2015 because of the unique nature of its constituents,” said Kudrimoti. “High School is often regarded as a social battleground where cliques form and divide up a given grade. The remarkable Class of 2015, however, defies this American stereotype in that the captain of the math team can be friends with the captain of the football team. The diverse makeup of our class points towards a rich future for this class as we all branch out and improve the world.”

The class gift is a brand new bench that will be donated in memory of Dias, which will be located at Pioneer Stadium.

After the LHS Concert Band, Senior Chorus and Chamber Singers performed a cover of Styx’s “Come Sail Away,” DiPietro offered remarks to the Class of 2015.

After highlighting several memorable moments from the Class of 2015’s senior year, DiPietro took a moment to honor Dias.

“We know she is here with us today,” said DiPietro. “We will each honor her memory and carry her with us wherever we go.”

DiPietro also offered one last piece of advice to the Class of 2015.

“Today, I challenge each of you to simply try your best, take what has been provided to us and make it provide for others,” said DiPietro. “Always strive to build not only a more fulfilling life for yourself but also a better world for all. Do not be afraid to take risks and challenge yourselves; success is often the result of taking a wrong step in the right direction.”

After DiPietro concluded her remarks, Superintendent of Schools Jane Tremblay offered some brief remarks before bidding farewell to the Class of 2015.

Tremblay said the Class of 2015 will “always have a special place in my heart.” She joked that she was not sure she “would have survived this past winter and all those snow days” without the Class of 2015’s “endless guidance and advice.”

The superintendent said graduation not only marks the end of the Class of 2015’s careers in the school system, but also “signifies the beginning of the rest of your life.”

“Today signifies that this is your time,” said Tremblay. “This life can be so ordinary in nature if you choose that. You have an opportunity to take this time, your time, and make it so much more. Take the ordinary days that lie ahead and make them extraordinary.”

End of an era

School Committee Chairwoman Susie Cleary awarded diplomas to the 151 graduates with the assistance of Principal Cleary and Tremblay.

After the graduates received their diplomas and Principal Cleary wished the graduates well as they begin the next chapter of their lives, the Class of 2015 threw their mortarboards in the air, officially marking the end of their Lynnfield High School careers.