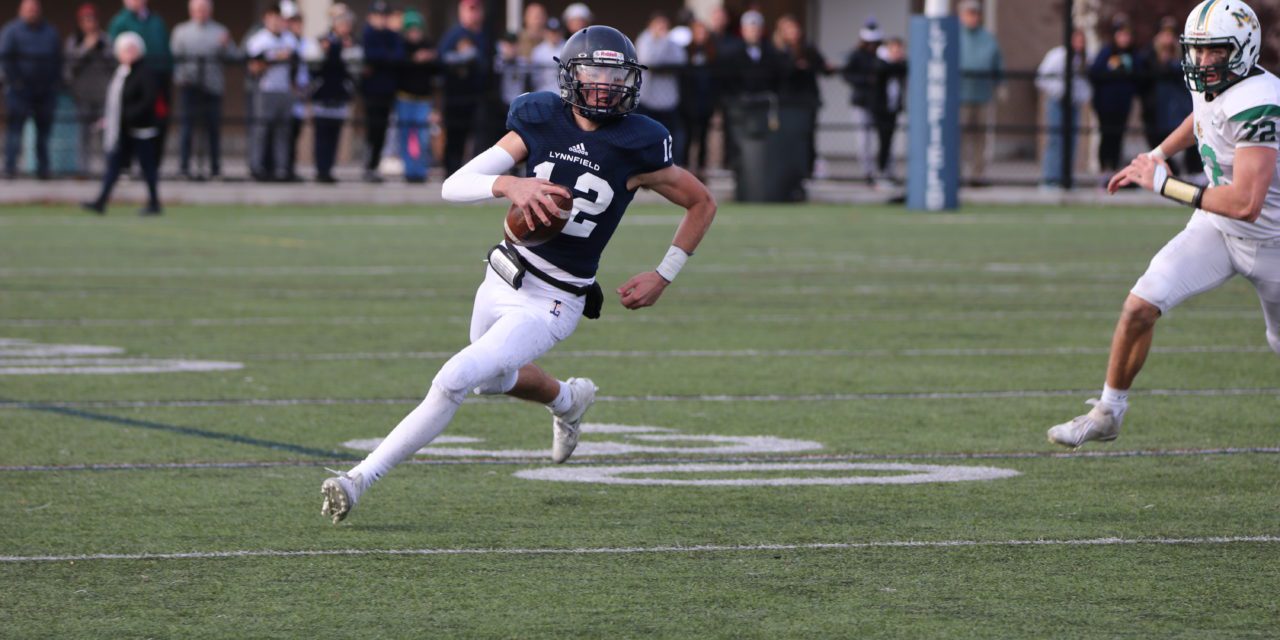 LYNNFIELD — Last Thursday, for the first time in two years, Lynnfield and North Reading met on Thanksgiving morning for the rivalry’s 62nd installment.

It was a familiar matchup for two teams on completely different ends of the football spectrum. After failing to make the playoffs, Lynnfield entered the game with a record of 4-5. On the other end, the Hornets held a 10-1 record and still had a Super Bowl date with Swampscott at Gillette Stadium set for Dec. 1.

While many expected a North Reading rout, the Pioneers showed on this brisk Thanksgiving morning they would not go down without a fight, competing to the end in a 28-25 defeat.

If you predicted a Hornets blowout, you would have sounded like an expert in the early stages of the game. North Reading’s Ryan McCullough received the opening kickoff and made a slew of Pioneer tacklers miss before returning it for a 93-yard score. A block in the back penalty nullified the touchdown, but North Reading’s offense still found a way to march down the field. After seven plays, the Hornets faced a 4th and 3 around midfield. Junior quarterback Alex Carucci threw a swing pass to junior Craig Rubino who not only picked up the first down, but scampered 47 yards all the way into the end zone. Following a missed extra point, North Reading took an early 6-0 lead on the road. 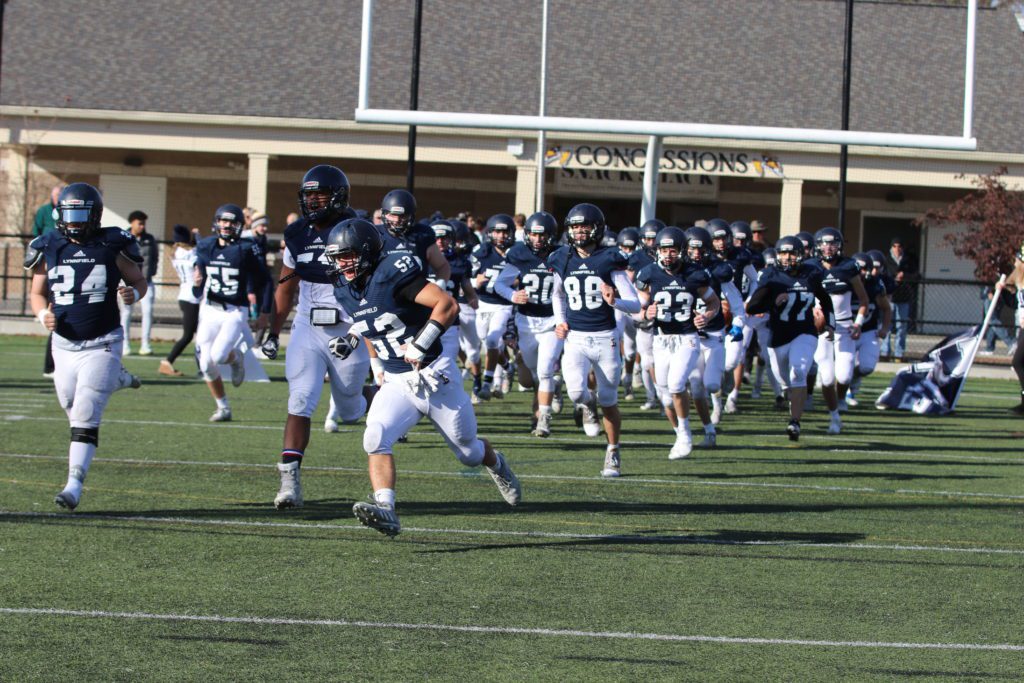 The Hornets immediately got the ball back following a quick Lynnfield three-and-out. With a chance to go up two scores early, the Pioneers needed something to spark some momentum. After advancing the ball again to midfield, North Reading looked ready to blow the door wide open.

That was until junior defensive back Kyle Schmitz stepped in.

The Hornets handed it off to Will Batten who was immediately met by junior linebacker Steven Dreher. After Dreher stood up the running back, Schmitz swooped in and stripped the ballcarrier before jumping on the ball for the game’s first turnover.

With new-found life and a strong gust of momentum at their backs, Lynnfield put together a long methodical drive, taking over seven minutes from the clock. The Pioneers moved the ball mostly on the ground but a huge pass play from sophomore quarterback David Tracy (6-14, 58 yards) to junior James Sharkey (1 catch, 17 yards) on 3rd and 13 kept the drive alive.

From there, Lynnfield continued pounding the ball on the ground with the three-headed monster of Spencer Riley (15 carries, 132 yards, 4 touchdowns), James Sharkey (9 carries, 20 yards), and Robert Marley (8 carries, 28 yards). On 2nd and 3 from the North Reading 8-yard line, Riley took it up the gut and punched it in for a Pioneer touchdown. Following Kevin Connolly’s extra point try, Lynnfield would lead 7-6 early in the 2nd quarter. 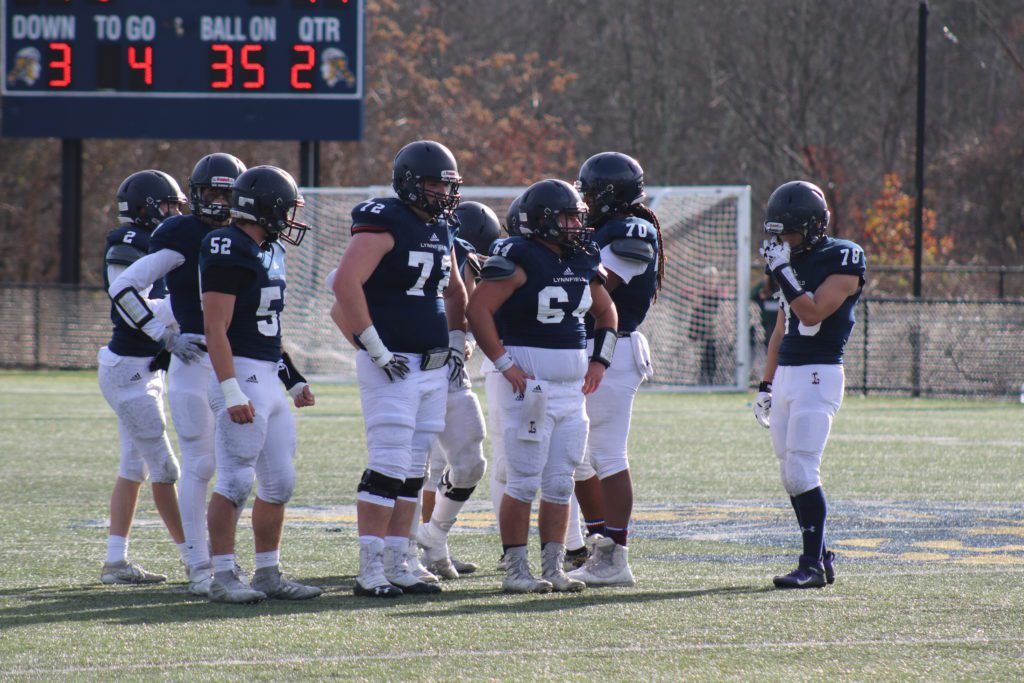 THE OFFENSIVE line imposed their will on a tough Hornet defensive front on Thanksgiving. (Kristine Marengi Photo)

Despite stealing the momentum back with the forced turnover and touchdown, the Pioneers quickly found themselves back in a hole. On the ensuing kickoff, McCullough once again found a hole and ran it back for another score. There would be no flags this time as the Hornets hopped right back in the lead 14-7.

Lynnfield could have easily folded after the quick swing, but committed to their game plan. On offense, the Pioneers delivered a steady slate of runs chewing up the clock while keeping the potent Hornet offense on the sidelines. Despite all the runs, the drive once again relied on a 3rd and long pass play when Tracy fired a bullet to sophomore receiver Jack Calichman (1 catch, 14 yards). After taking nine minutes off the clock, Lynnfield was now 5 yards away from the end zone facing 4th down.

The Pioneers handed it off again to Spencer Riley who refused to go down before crossing the goal line. Following the 5-yard rushing touchdown, Lynnfield missed the extra point but only found themselves down one, trailing 14-13. 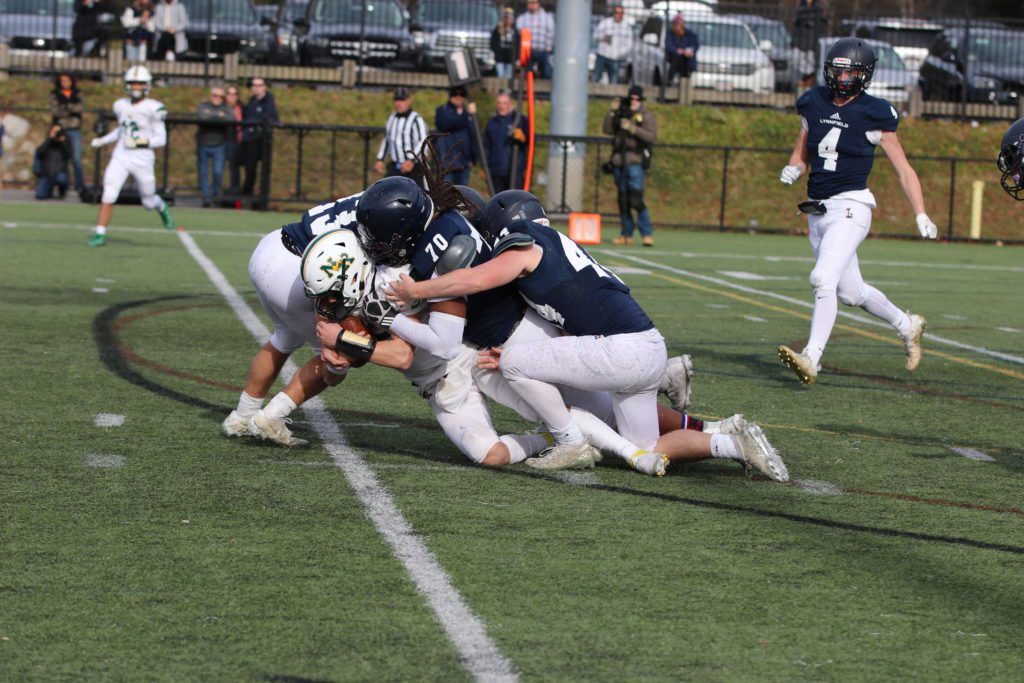 THE PIONEER defense did well to contain a Super Bowl-bound team that averaged 40 points per game this season. The Hornet offense scored 21 of their 28 points on Thanksgiving. Pictured on the stop is Jack Phelps (13), Mekhi Peters (70) and Steven Dreher (44). (Kristine Marengi Photo)

“Sticking with running the ball and getting behind Spencer Riley, [James] Sharkey, and [Robert] Marley was huge,” commented Pioneers head coach Pat Lamusta on his team’s ground game. “We tried establishing the run even when we were down and the O-line really got after it today.”

The 2nd and 3rd quarters would mostly be a defensive battle but North Reading finally broke through late in the 3rd quarter. Following a 28-yard pickup on a shuffle pass, sophomore running back Will Batten ran it up the left hash mark for a 9-yard touchdown. Trailing 21-13, Lynnfield may have entered the 4th quarter down but certainly not out.

Facing 3rd and 2 from their own 41-yard line, the Pioneers once again turned to Riley to keep the drive alive. The senior captain was not only able to move the chains, but after barreling up the middle bounced it to the left sideline for a 59-yard touchdown run. The two-point try came up short, but Lynnfield now only trailed 21-19.

With 8:07 left in the 4th quarter, the Pioneer offense took the field again following a strong stand from their defense. Lynnfield continued dominating the line of scrimmage and with that, endlessly ran the ball down the Hornets’ throat. After advancing the ball inside the red zone, Riley yet again strutted across the goal line for a 16-yard touchdown run.

Leading 25-21, only three minutes separated Lynnfield from one of the greatest upsets in program history. North Reading began their final drive at their own 30-yard line. With only a handful of timeouts in their back pocket, the Hornets wisely completed their passes towards the sideline preserving as much clock as possible.

North Reading reached the Pioneers’ 39-yard line and faced a potential game sealing 4th and 2. Expecting a short pass or run, Lynnfield cheated up but paid the price when Craig Rubino slipped open down the right sideline for a 29-yard gain. Will Batten punched it in the next play on an 11-yard run to give the Hornets a 28-25 lead with 1:18 remaining.

Lynnfield’s offense would come up a yard short on a 4th and 1 attempt and for the sixth straight Thanksgiving game, North Reading was victorious over the Pioneers.

“It was there for the taking,” stated coach Lamusta on the disappointing loss. “They are very well coached and that’s a great group of kids. They’re going to Gillette so we knew we had our hands full.”

While certainly having their hands full, the Pioneers still have a great deal to be proud of. Defensively, Lynnfield was able to go toe-to-toe with a team that averages over 40 points per game holding them to just three offensive scores. On offense, the Pioneers executed a perfect game plan chewing clock and slowly moving the ball down field. Lynnfield also did not commit a single penalty for all four quarters.

Lynnfield did everything right, but in the end, it was not enough. While the finality of the season can be a tough pill to swallow, brighter days are certainly ahead for this program. The Pioneers will only lose nine seniors and should have plenty of experience going into the 2022 campaign.

“It’s been a similar story all year where we are just kind of a few plays away,” noted coach Lamusta. “Hopefully next year, with a more experienced group, we’re making those plays.”