Pioneers move to 3-0 after 13-7 win over Pentucket

LYNNFIELD — In a season where nothing seems normal, only one thing remains constant: When it comes to senior night, nothing matters more than sending out the upperclassmen with a victory.

Last Friday night, the 2-0 Lynnfield Pioneers tried to do just this when the Sachems of Pentucket came to town. Due to earlier COVID-19 complications, this would be Pentucket’s first game of the Fall 2 Season.

After the defensive battle the week prior, it looked early on like this one could be a shootout. On just the fifth play from scrimmage, senior quarterback Austin Sutera (10-18, 140 yards, 1 touchdown) looked to a familiar target. Senior captain Jack Ford (2 catches, 72 yards, 1 touchdown) hauled in Sutera’s pass up the left seam. Despite being surrounded by four Sachem defenders, Ford would cut right and leave everyone in his dust for a 55-yard opening score. Sophomore kicker Kevin Connolly’s extra point gave the Pioneers a 7-0 lead just two minutes into the contest.

So how exactly do you stop a high-powered offense like Lynnfield?

Pentucket’s answer was simple, keep them on the sidelines. With an abundance of runs and quick throws, the Sachems were able to dominate first half time of possession 12:54 to 7:06. The Pioneers would only touch the ball three more times before halftime (with one possession beginning with 10 seconds left in the half). When the Lynnfield offense was on the field, they struggled to find a rhythm.

Fortunately for the Pioneers, the defense continued to shut the door. Despite Pentucket’s lengthy clock-chewing drives, Lynnfield always came up with a 3rd or 4th down stop when they needed it. Although, with under two minutes remaining in the 2nd quarter, the Sachems would finally break through.

On 3rd-and-11 from the Pentucket 20 yard line, the Pioneers sent the house and Sachems quarterback Chase Dwight made them pay. Dwight hit senior receiver Silas Bucco on a perfectly executed screen pass which turned into a gain of 22 yards. Eight plays later, Pentucket was inside the Lynnfield 10 with a chance to tie it. With 24 seconds left in the quarter, Dwight faked the handoff then found a wide-open William Sutton in the end zone to make it 7-7 at the half.

Having just scored a last second touchdown to end the half, Pentucket got the ball to start the 3rd quarter with all the momentum on their side. That momentum escalated on 4th-and-13 when the Sachems lined up to punt from their own 35 yard line. Senior punter Andrew Melone took the snap and after a slight hesitation, darted up the right sideline to keep the Pentucket drive alive.

In a situation where most teams would succumb to the momentum, Lynnfield took it right back.

On the very next snap following the fake punt, Ethan Ruszkowski caught a short pass to the left from Dwight. As the receiver turned up field, senior captain DJ Capachietti immediately punched the ball out of Ruszkowski’s hands where Jack Ford was there to grab it. Had it not been for a block in the back penalty, Ford would have had a 56-yard return for a touchdown, but momentum had finally swung back the Pioneers’ way.

Lynnfield was unable to turn the forced fumble into points but did flip the field position pinning Pentucket at their own 13 yard line. The Sachems once again put together another time-consuming drive erasing five minutes and 41 seconds from the clock. Once again though, the Pioneers defense would come through.

On the first snap of the 4th quarter, Pentucket faced a 4th-and-1 from the Lynnfield 18 yard line. With a successful rushing attack on the drive, the Sachems turned to the ground game again. After taking the snap, Dwight called his own number and tried to run it up the gut. After shedding a block from the left tackle, junior linebacker Nicolas Marcinowski blew up the play in the backfield.

After the huge defensive stand, the Pioneer offense finally started to click. With time in the pocket, Sutera was able to move the chains with big throws to senior receiver James Considine (1 catch, 13 yards) and senior captain Bakari Mitchell (2 catches 31 yards). The biggest play of the drive came from Capachietti (9 carries, 104 yards).

On 3rd-and-1 from midfield, Capachietti took the handoff and burst up the left side of the field. After delivering a swift stiff arm to an oncoming defender, the senior captain would finally be brought down at the Sachems 8 yard line. Similar to Lynnfield’s defense, Pentucket bent but would not break. For four consecutive plays, the Pioneers could not cross the goal line and turned the ball over on downs with 4:43 left in regulation.

In the closing minutes of last week’s game against Newburyport, Lynnfield relied on their defense to secure victory. On the all-important senior night, the defense would once again make the timely play.

Facing 3rd-and-5 from their own 16 yard line, Pentucket’s quarterback rolled to his left and fired a quick pass towards Andrew Melone. By the time the wideout turned back, it was already too late. Junior linebacker Spencer Riley read the quarterback’s eyes perfectly and jumped the route for a 16 yard pick six.

“I don’t even know where to start with the defense,” commented Pioneers head coach Pat Lamusta after the game. “He [Riley] plays sideline to sideline, he is tremendous and we are so excited to see what he can do…To see our defense get a pick six, it was special.”

Leading 13-7 with under three minutes to go in the game, Lynnfield needed one more stop on defense. It was only fitting on senior night that senior cornerback Blake Peters would be the one to knock down Dwight’s last-ditched pass on 4th-and-17.

With 1:27 remaining, the Pioneers needed one more first down to make it official. Lynnfield once again turned to Capachietti who took the handoff and exploded through the line of scrimmage and had nothing but daylight ahead of him. Capachietti could have easily scored what would have been his final touchdown in Pioneer Stadium. However, he selflessly and smartly turned out of bounds at the 1 yard line ensuring Pentucket would never get the ball back.

“He’s a player coach,” said coach Lamusta on Capachietti. “If all the coaches weren’t there, DJ could pull the guys together and run the practice. He’s the type of kid I’d like to try and convince to come back and coach someday.”

Following Capachietti’s 35-yard run, Lynnfield lined up in victory formation to run out the clock. The Pioneers won 13-7 for the second straight week. The victory also solidified the first undefeated season at home since 2014.

More importantly though, the win sent the seniors out as victors. In the midst of a season that almost wasn’t, perhaps no one understands what this senior class means to the program more than coach Lamusta.

“These seniors have been hard workers since the time they came in as freshman. They’re just a very competitive group and they love football, so what more can you ask?” 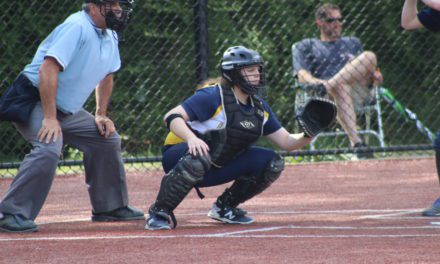 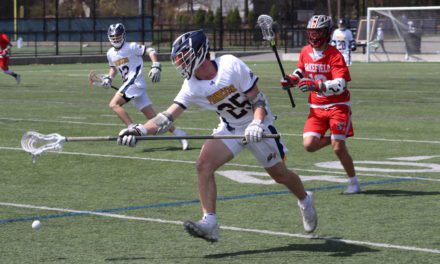