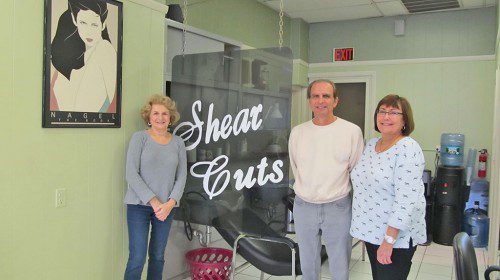 WAKEFIELD — Shear Cuts, a fixture for the past 18 years at 59 Albion St., is closing its doors. The last customer owners Michael DiNauta and his sister Yvonne George will see is coming in at 2 p.m., Wednesday, Dec. 24 — Christmas Eve.

DiNauta and George will be moving to Myrtle Beach, S.C. and Pomona Beach, Fla., respectively, in the first quarter of the new year.

But all will not be lost. Their remaining hair stylist Nancy Muise will open a new salon around the corner after the new space is inspected.

And her new salon will get its name from the street where it’s located: Foster Street.

Salon on Foster will be a one-woman shop with Muise overseeing operations and doing the styling. With 39 years in the hair styling business, she said it’s time she had a place of her own and she’s hoping all 70 of her customers will follow her.

DiNauta agrees. “It’s about time Nancy had a place of her own,” he said.

Though success is never a guarantee, his plans are to help Muise achieve her goals by tutoring her in business management.

After several months of assistance, DiNauta will then pack his luggage and head for the beach on March 1.

He and his sister plan to travel south together and enjoy the sights along the eastern seaboard before settling in at their condos.

They agreed to speak to a visitor recently and spoke about incidents they most remember while on the job. There were a few girls who came in to the shop with hair brushes stuck in their hair. And the young woman whose corn rows had to be taken out.

She grew quiet then and reflected on what she and her brother will miss most: The people who’ve been their loyal customers.

As most people say when they are about to close a business, it’s the people owners will miss most but when DiNauta and George visit the area they’ll look forward to catching up and reminiscing with everyone they left behind, including all 300 of their customers.

The building DiNauta has occupied on Albion Street has been sold to an individual who owns a computer scanning company in Reading, so in addition to Salon on Foster Wakefield will gain another new business.

Until the year ends, DiNauta and George are inviting people in to say “so long” and to offer their greetings for a Merry Christmas and Happy New Year.

“Auld lang syne has a different meaning for us this year,” said DiNauta. “We will never forget our old acquaintances, but we’re also looking forward to meeting some new ones.”