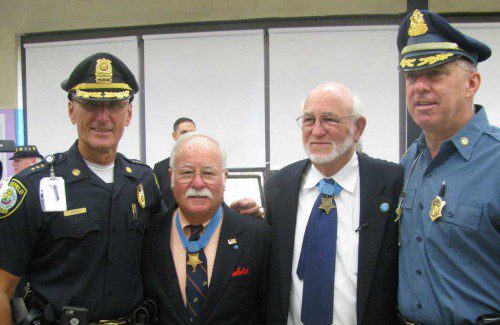 WAKEFIELD — Wednesday, Sept. 16, 2015 was a day that no current Wakefield Memorial High School student will soon forget. Nor, for that matter, will anyone else who was there on that day.

Just after 9 a.m. with the entire WHS student body as well as faculty, town and state officials and other dignitaries lining Hemlock Road, a Massachusetts National Guard Blackhawk helicopter carrying two Congressional Medal of Honor recipients touched down on Walsh Field across from the High School.

The retired military heroes are in Boston this week as the Congressional Medal of Honor Society holds its annual convention and Patriot Award Gala in the city for an unprecedented third time. As a feature of the convention, pairs of Medal of Honor recipients were flown to a select group of schools around the state via Blackhawk helicopters yesterday. Wakefield High School was one of only a dozen public schools chosen for this honor.

Once the students were assembled, Barnam was escorted into the Field House by WMHS senior Tori Tringale as the Wakefield High School Wind Ensemble played the Marine Corps Hymn. Next, Ingram entered to the tune of “Anchors Aweigh,” escorted by WHS senior Grace Hurley.

After senior Sarah Stumpf led the school in the Pledge of Allegiance, the WHS Chamber Singers performed the National Anthem.

Reading from Barnam’s citation, Marino described Barnam’s actions on December 18, 1965 at Ky Phu in Quang Tin Province, Republic of Vietnam that resulted his receiving the Congressional Medal of Honor.

With his company pinned down by enemy fire, the commanding officer mortally wounded and the radio operator killed, Barnam assumed command of the decimated company and, moving at once into the midst of the heavy fire, he was able to reorganize units to replace the loss of key personnel. He led their attack on enemy positions while also guiding air strikes against the enemy. He was able to direct the evacuation of wounded and dead and assist in completing the battalion’s final objective.

Barnam had some words of advice for the students of Wakefield Memorial High School.

“I want you to set your goals high,” he told them, “and never say ‘I can’t.’ Remove the word ‘failure’ from your vocabulary.

“You are building a foundation right now at Wakefield High School,” Barnham said, “and that foundation has to be strong. There’s no free lunch and you’re going get what you work for. If you don’t work, you won’t get it. Build that strong foundation.”

Metropolis called upon senior Madison Guay to introduce Robert Ingram. He earned the Medal of Honor for his brave actions on March 28, 1966 while serving as Corpsman with Company C, First Battalion, Seventh Marines against elements of North Vietnam Army (NVA) in Quang Ngai Province, Republic of Vietnam.

Petty Officer Ingram suffered multiple serious wounds himself while rendering medical aid to Marines whose ranks were being decimated under heavy NVA fire. Enduring the pain from his many wounds and disregarding the probability of his demise, Petty Officer Ingram’s intrepid actions saved many lives that day.

Ingram said that soon after he enlisted in the Navy he was impressed by the commitment he saw among the corpsmen he encountered.

“I decided I wanted what they had, and that was the dedication to do their jobs right. So I became a corpsman.”

Ingram said that his actions on that day in Vietnam came down to the Marine Corps Values: Honor, Commitment and Courage. He talked about his commitment to his country and to his team. He defined “courage” as “a conscious decision made moment by moment to do the right thing.”

“The decisions you make are life-lasting,” Ingram advised the students. “The decision you make today is going to live with you for the rest of your life. So you need to make the right decision.”

At the close of the program, seniors Joe Boudreau and Julianne Bourque presented gifts of appreciation to Barnam and Ingram.

The Medal of Honor recipients were then escorted by the motorcade of State Police cruisers back to Walsh Field and the waiting Blackhawk helicopter.