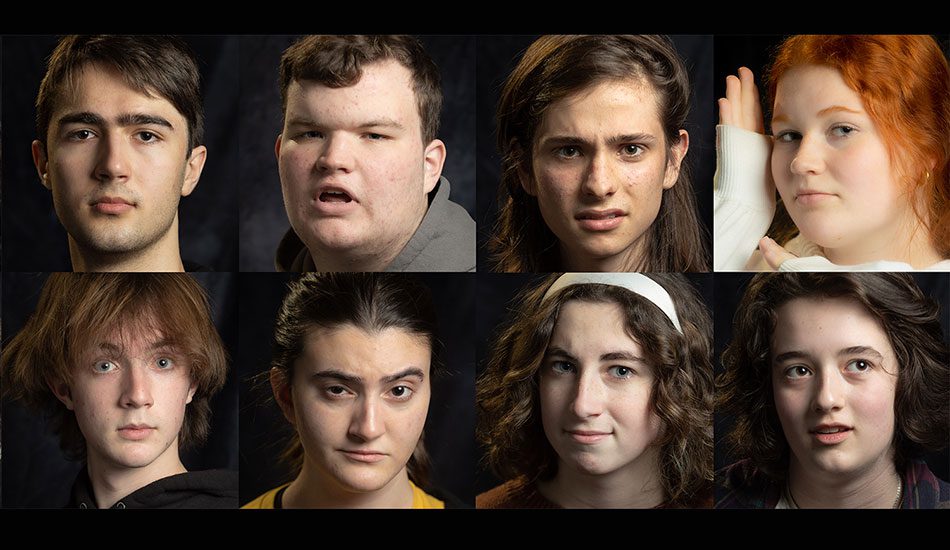 COME SEE THESE high schoolers and more in “The One-Act Play That Goes Wrong” from Dec. 17-19 at Melrose Middle School Auditorium.

MELROSE — For director Tony Angeles, the upcoming Melrose High School production of a play that goes all wrong is actually going all right. Even the timing is working out.

“There is no better theatrical metaphor for the pandemic than this show,” Angeles says. “Both the pandemic and The One-Act Play That Goes Wrong are a series of never-ending, unexpected, and catastrophic challenges. In this show, these amateur actors just keep going, and never give up trying to finish their show. During this pandemic, we never gave up hope that we could get back to the things we loved to do. And here we are, putting on a show that through its meticulously planned mayhem and chaos, celebrates theatre and the resilience of people that put on a show.”

Recently, Angeles sat down with the Weekly News to talk about the play’s origins, his funny cast of teen actors, and why this is exactly the kind of show the Melrose community needs to see right now.

What’s the background for this play?

The One-Act Play That Goes Wrong is based on the hit West End and Broadway show, The Play That Goes Wrong. It was the breakout hit for Mischief Theatre, a small, London theatre group that began life in 2008 as a drama school Improv troupe. Three of Mischief’s founders came up with The Play That Goes Wrong when they were roommates scraping by with day jobs. They realized that some of their favorite moments in theatre where when things went horribly wrong on stage, and the actors had to find ways to cover it up and just keep going.

What will audiences see?

Audiences that experience the show appear to have walked into an amateur production of a 1920’s murder mystery play called The Murder at Haversham Manor, performed by students from the Cornley Polytechnic Drama Society. And even before the show starts, we begin to see that things are starting to go wrong… and they just keep going wrong all the way until the end of the show. The One-Act Play That Goes Wrong was developed specifically with young actors in mind. It is closer to how the show was originally staged before it was developed into a two-act show for the West End. It cuts out a lot of the more dangerous aspects of the original show, including the collapsing second level, the elevator that breaks down, and above-the-stage stunt work.

How many Melrose High students are in the show?

The show has actually been double-cast with eight students in each cast. The 616 cast: Sam Rossi, Jacob Sorensen, Lillian Cancelarich, Jackson Sorice, Emmi Kilgallen, Liliana Ravins, Sam Chetkin, and Delainey Boyd. The 19999 cast: Zachary Latta Giuliana, Spencer Kenawell, James Cancelarich, Ella Arens, Addy Hickey, Rosie Egan, Olivia Webb, and Philip Murray. In our version of the play, Cornley Polytechnic is actually a local Massachusetts technical high school, so we are holding an “activities fair” before the show and during intermission that the audience can participate in. Things will, of course, “go wrong” at this fair, and three more additional actors will be taking part in that. We also have a crew the same size of the double cast — 16 students.

The show is a comedy. Tell us about a funny moment so far during rehearsal.

What I love about this play, and the spirit of Mischief Theatre in general, is that you are encouraged to just play with the show, and find even more opportunities for humor than what is actually on the page. The script even has “vamp” moments where the actors are required to improv in front of the audience. Mischief Theatre was founded on Improv, so I have been teaching all of our actors Improv games and the basic principles of Improv. I honestly cannot pick a “funniest” moment from rehearsal, because these kids keep finding more and more jokes throughout rehearsal. We honestly never stop laughing! Most of these jokes are intentional, but there is often an unintentional slip that fits in with “goes wrong” spirit of the show. I keep finding myself saying “Keep it!” when these happen.

For the past few years, you’ve been directing the annual musical at Roosevelt Elementary. This is your first time directing at the high school level in Melrose. How different has it been?

The biggest difference between directing high school and elementary school for me is that most of these high school students have been doing theatre for years now, and I don’t need to try to show them why theatre is a joy to create, or teach them the core principles of theatre — they already love it and know how to do it. I went in expecting them to be closer to the level of professional actors, and in that way I was not disappointed — they’re some of the most talented and funniest actors I’ve ever worked with, and they really support each other as actors. However, because of my inexperience with teenagers in general, I’ve had to realize that they are all still “kids” and are still learning basic “adulting” things. As my own kids are just becoming teenagers, directing this show has been really good practice.

This is also your first in-person show as a director since the pandemic started. How has it been for you to be back on the stage, in-person?

I had forgotten how physically exhausting directing an in-person show is compared to a virtual show (especially with the high-energy way I tend to direct). And it is not quite the same as before, since we all have masks on. But this show is steeped in broad, slapstick comedy, and I think the masks have actually pushed the actors to express themselves even more with their physicality than they would without the masks. We will also be trying to do the show with special-ordered clear masks. And we recently took headshot photos of the all the actors — it was nice to see what these kids actually look like!

Tell us about your theater background.

While I’ve primarily been a stay-at-home dad for the last 14 years, my professional career up until the day my first kid was born was in musical theatre. I have an MFA from the Tisch Graduate Student Musical Theatre Writing Program, and for 13 years I worked in marketing, design, and production at Music Theatre International in New York, Pittsburgh Musical Theatre, and North Shore Music Theatre in Beverly. I was brought back into theatre when Aimee Galego directed my eldest son in Annie JR. at the Roosevelt, and then asked if I wanted to take over the program. I’ve now done five Broadway JR. shows at the Roosevelt with both my kids, and I’m looking forward to continuing to direct there this year with the great team of parents we’ve established over the years.

What was your favorite show to act in when you were in high school?

I actually did not enjoy the high school shows I acted in! My love for theatre was actually cultivated in college, when I got to play Hysterium in Sondheim’s A Funny Thing Happened On The Way To The Forum. The following year, I actually wrote an original musical for that same theatre company. The theatre scene at the University of Pennsylvania also allowed me to write a children’s musical, direct one-act plays, and join an Improv comedy troupe and a cappella group. College was when I truly fell in love with theatre.

Why should people in the Melrose community come see this show?

The poster for our show features a fake quote: “Just as good as the Broadway production!”– A cast member’s parent. But I really believe this is why Melrose needs to come out and see this show. You will be laughing even before the show starts (with comedy happening around you as you take your seat), and will not stop laughing for the next two hours. We even have an Improv Q&A with the Cornley characters after the curtain call. The joke-per-minute ratio of this show is ridiculously high, and these young actors really do come close to reproducing the precision comedy of the original Mischief Theatre productions. And unlike many high school plays these days (plays not musicals), this is a show that the entire family can see, regardless of age, and enjoy it together. Jonathan Sayer, one of the authors of this play and the original Dennis Tyde, once said in an interview, “We just try and be as funny as we possibly can and write pieces that are devoid of cynicism.” Given the what the world has been like lately, I think this is exactly the kind of show that students need to perform and audiences need to see right now.

• Tickets: tinyurl.com/melrosegoeswrongtickets. $12 for adults. $10 for students/seniors.