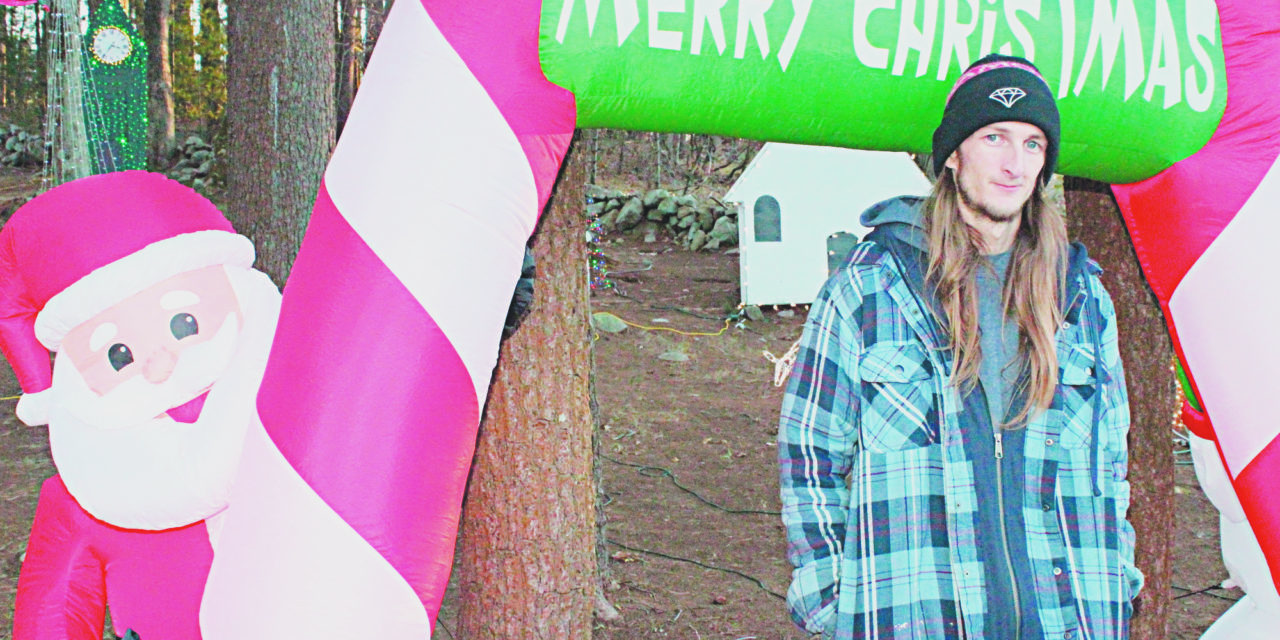 Mendonca and his girlfriend Emily Sullivan have transformed their 371 Salem St. property into a vibrant holiday display called “Winter Wonderland at 371 Salem St.” He started decorating the 371 Salem St. home when he first moved to town five years ago.

“It just keeps getting bigger every year,” said Mendonca. “I bought stuff at different stores after the holidays. This year, I bought stuff over the summer on Facebook Marketplace.”

After Sullivan’s aunt told Mendonca about the Recreation Department’s Light Up Lynnfield Contest, he entered the contest in 2018. He won the Clark W. Griswold category and the People’s Choice Award category in 2019, and won the Creative Use of Lights category this year.

“I was stunned,” said Mendonca. “I am very happy about winning the Creative Use of Lights category.”

Mendonca is undertaking a Toys for Tots fundraiser for the second straight year. He is using a camper that is similar to the one Cousin Eddie called home in “National Lampoon’s Christmas Vacation” in order to store the gifts that people donate for the fundraiser.

“I started collecting gifts for Toys for Tots last year,” said Mendonca. “It was a spur of the moment decision, and I ended up collecting 885 gifts. My goal is to collect 1,000 gifts this year. I am hoping to make that goal happen. I want to help kids in need have the best possible Christmas.”

Mendonca said the Toys for Tots collection drive is running through Friday, Dec. 10. 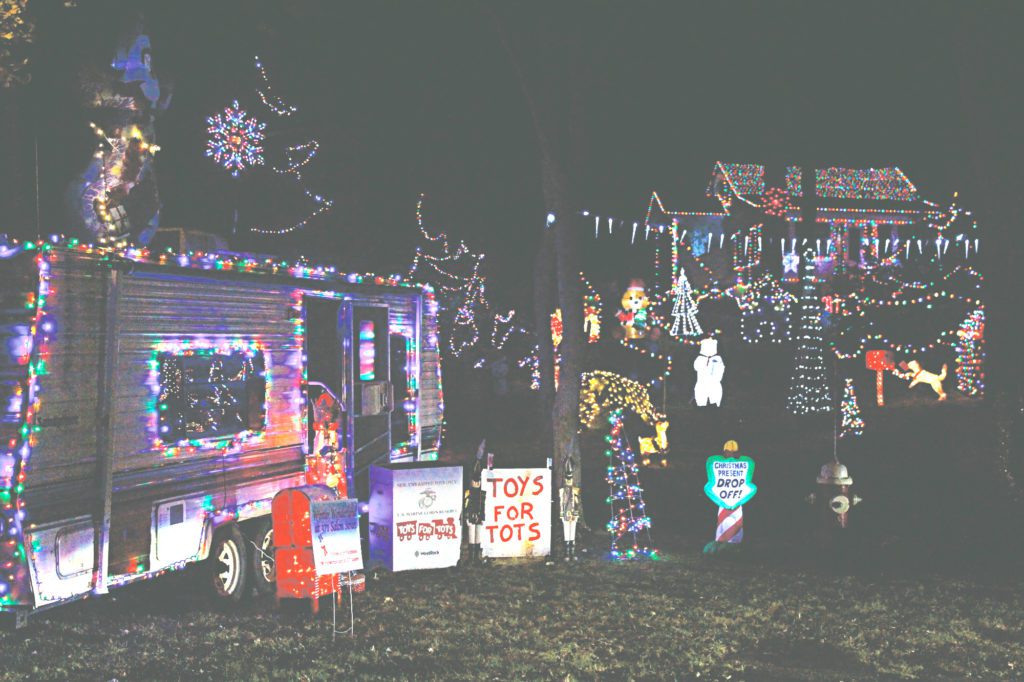 THE WINTER WONDERLAND display at 371 Salem St. also serves as a Toys for Tots drop off location at the “Clark Griswold camper.” Corey Mendonca hopes to collect 1,000 gifts this year. (Maureen Doherty Photo)

“The drop off times will be from 6 a.m. to 8 p.m.,” Mendonca wrote on the Winter Wonderland at 371 Salem St. Facebook page. “Toys can be dropped off in the Clark Griswold camper which is at the bottom of my yard.”

Mendonca noted that Santa Claus will be appearing at Winter Wonderland at 371 Salem St. every Saturday. He said children can have their picture taken with Santa inside the camper for free.

The decorations being displayed at Winter Wonderland at 371 Salem St. include an assortment of lights, candy canes, an inflatable Santa Claus and an inflatable Jack Skellington from the classic Tim Burton film “A Nightmare Before Christmas.” He also built a tunnel of lights over his driveway and built some small decorative houses, a toy store, a church and a clock tower. 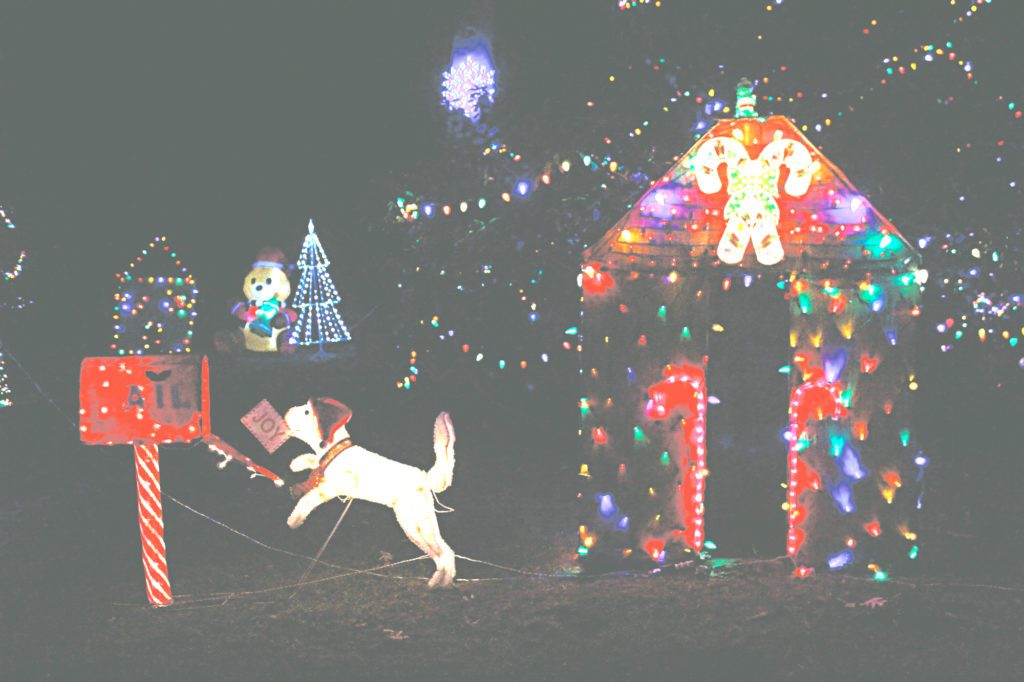 A GINGERBREAD HOUSE and a puppy mailing a letter to Santa are just two of the countless Christmas displays designed by Corey Mendonca at his Salem Street home that earned him the “Creative Use of Lights” award in the Light Up Lynnfield contest.
(Maureen Doherty Photo)

“I work on it after I get home from work,” said Mendonca. “I tried not doing anything on the ground until I got my leaves cleaned up. It took me the whole month of November to get that done, and I had to make sure the decorations would not blow over when I was trying to get the leaves out of my way. When I put the decorations up, I placed things in a way so people can see them on Salem Street. Both directions give people a different view. People won’t pass by without seeing it.”

Mendonca developed his passion for holiday decorating while growing up in Derry, New Hampshire.

“I have been doing this my whole life,” said Mendonca. “I decorated my mother’s house when I was growing up whether it was for Christmas or Halloween. I have always enjoyed decorating.”

Mendonca said decorating for the holidays is incredibly enjoyable and rewarding.

“My kids love it,” said Mendonca. “It’s a fun hobby. I prepare for it all year. I absolutely love doing it.”