Volleyball rolling along at 5-0 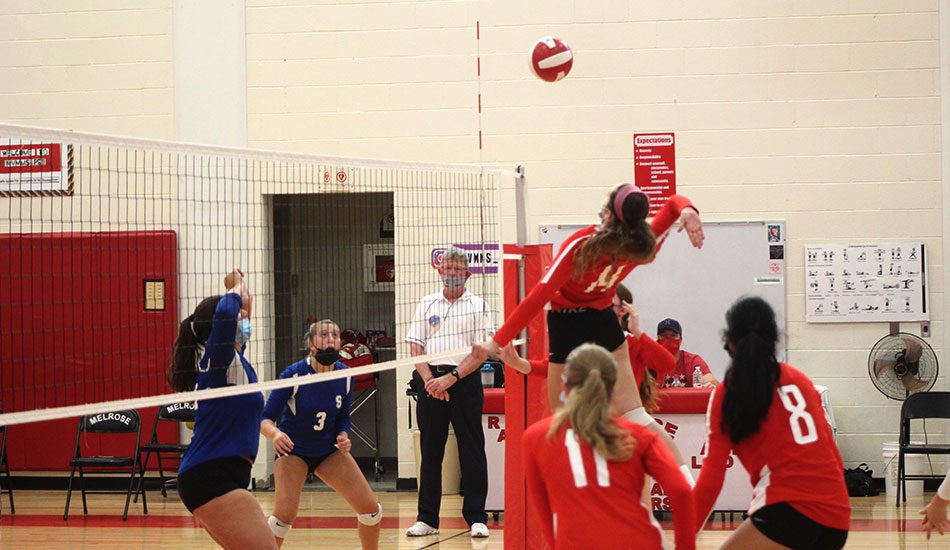 MELROSE—The Melrose High girl’s volleyball team improved to 5-0 as they entered Freedom League play this week with consecutive wins over Stoneham and Watertown. Melrose topped both the Spartans and the Raiders in straight 3-0 sets and looks to keep the winning streak going when they host Wakefield on Thursday (post deadline) and travel to Burlington on Tuesday for a must-see match up.

On Saturday night at the Melrose Middle School gym, Melrose was entirely dominant against Stoneham, sweeping the Spartans in sets of 25-8, 25-11, 25-7. Melrose junior captain Chloe Gentile led in all scoring with 10 kills followed by Elena Soukos with 9.

Libero autumn Whelan shined both on defense on on the serving line where she dialed up 17 service points. Junior setter Emma Desmond had 18 assists for the night.

Hitting was a varied flavor for Melrose with contributions from Gia Vlajkovic, Ava Burns and Sadie Jaggers, who impressed with and a number of blocks up front. The game was a great opportunity for new players such as hitter Anna Shoemaker and setter Ruth Breen, who stepped in and tallied up 8 assists.

Melrose ran out to an early lead of 8-0 that they’d never surrender in set 1 behind the hitting of Chloe Gentile, Elena Soukos, Gia Vlajkovic and Ava Burns. Melrose took advantage of a strong service run from Autumn Whelan, who tallied three service points to start the game while teammate Ava Burns enjoyed two of her own. A Chloe Gentile service run included an ace and Elena Soukos hit back-to-back shots to give Melrose a 16-5 lead. Soukos shined on the service line with an ace and service point while sophomore Sadie Jaggers had a strong block/kill to put Melrose up 20-7. Melrose took the set win on an Autumn Whelan ace, 25-8.

In set two, Melrose relied on power hitting to get points on the board and essentially overwhelmed the Spartans. Chloe Gentile pounded five in the set while Elena Soukos delivered three. Set three was a servers’ delight as the set started with a lights-out serving from Autumn Whelan and ended there as well. Coming up big in hitting for the set was Chloe Gentile, Anna Shoemaker and Ava Burns.

Fueled by the win, Melrose traveled to Watertown on Tuesday to take on the Raiders, and overwhelmed them in three sets by scores of 25-3, 25-13 and 25-9 to improve to 5-0 on the season. Leading the team in scoring were Elena Soukos and Sadie Jaggers. Setter Emma Desmond tallied 16 assists.

On Thursday (post deadline) Melrose will host rival Wakefield, a team who has made gains in the last two seasons and is now coached by MHS state champ team alum Kayla Wyland. Action takes place at 5:30. On Monday, Melrose will travel to Burlington to face fellow league champ Burlington, a team Melrose will like to beat in order to repeat as Freedom League Champs. Game time is at 5:30 p.m. at Burlington High.