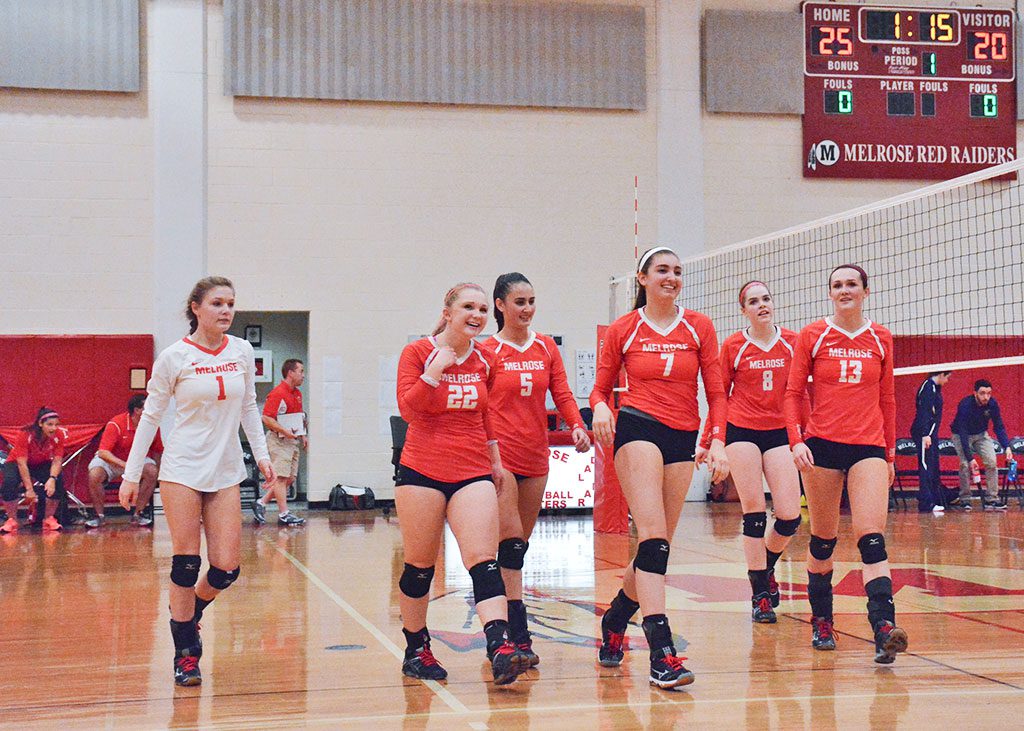 MELROSE — Going into their match last Friday night at the Melrose Middle School gym, the Melrose Lady Raider volleyball team was considered (arguably) the underdogs against an undefeated, top ranked Arlington Catholic team, who came to the floor unblemished at 13-0 and equipped with the state’s best hitter Demi Fogarty, a 6’3″ juggernaut whose front row kills are delivered like missiles.

But she was no match for Melrose’s Hannah Mulcahey, who outshot the hitter with 14 kills in two sets during Melrose’s stunning 3-0 sweep (25-19, 25-16, 25-17) of the Cougars, a longtime Div. 2 North foe, in what might be considered a prelude to postseason.

“This was great win. We knew it would be tough and that they had their big hitter back but our defense was key in the win,” says Melrose head coach Scott Celli.

It was a statement game for Melrose and for Mulcahey, who in set one inadvertently launched a kill directly to Fogarty’s face, which said a lot about how Melrose was playing that night: to win. But she was hardly alone. Captains Victoria Crovo and Marissa Cataldo brought both mega-hitting to the floor and blocks at the net that denied Fogarty’s firepower and helped earn Melrose’s 14th win of the season. Last season Melrose and Arlington battled to 5 sets with Melrose escaping with a 3-2 win, this year it was all Lady Raiders.

Junior libero Kaitlyn MacInnes had her finest game of her season, doing a momentous job of keeping Fogarty’s rockets off the floor, while new sophomore setter Lily Fitzgerald stunned with an exhausting 30 assists, seemingly all over the floor while setting up Cataldo, Crovo and Mulcahey. All in all, it was a collective effort from Melrose, who enjoyed very strong serving from sophomore Lydia Lombardo, whose service points and aces helped Melrose take set one, extending a 13-9 Melrose lead to 17-12. Meghan Leyne and Saoirse Connolly also held for the fort for Melrose, who took the decisive set one by a score of 24-19. In that set Victoria Crovo’s block kills off Fogarty’s offense gave Melrose the decisive edge to unlock ties of 5-5 and 7-7, while Cataldo kept Melrose up 11-9 with back-to-back kills. Mulcahey closed out the set with a rain of attacks that lifted Melrose to 24-19 victory. Overall on the night, Mulcahey had 14 kills, Crovo 13 and Cataldo 10. Crovo leads the team in total this season with 173 to date.

After the game coach Celli acknowledged this was the team’s best effort since their 2014 win against Newton North. Thanks to some adjustments made earlier in the season, Melrose has turned their game up a notch. “This season we’ve have had phenomenal leadership from our captains. Out back row is solid with Jill [Mercer], Kaitlyn and Marissa,” says Celli. “We’re not using the 6-2 offense at this point. Offensively, we mixed it up with all our hitters, keeping them off balance and Hannah had a great game. We’re really pleased with the win.”

Melrose’s remaining regular season could not be more challenging, with road games against Div. 1 giant Newton North, and top ranked Ursuline Academy and Westborough. But its the best kind of preparation for Lady Raiders, who are eyeing a playoff run they hope will result in taking back their Div. 2 North crown, and beyond.

Will they win every game in their home stretch? Maybe, maybe not. But they will finish their regular season playing teams of their caliber.

“We could see Arlington Catholic again,” said Celli. “So we are working on continuing to improve every day.”