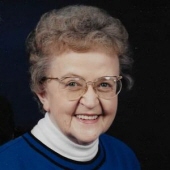 Devoted to her husband, her family, and to God

Mary was born in Malden, loving daughter of firefighter and World War I veteran William Mooney and Julia Cligott; sister of older brother Bill and younger brother John. She attended St. Joseph’s School, Notre Dame Academy, and Girls Catholic High School. While she received a scholarship to study journalism at a college in New York, God had other plans for Mary.

After high school, Mary worked at the telephone company, operating a comptometer. There she met three sisters, Mary, Gert, and Rita Sutherby, who would introduce her to their brother Frank in 1950. Among other places, they frequented two houses on their dates, Bob Cousy’s house at the Boston Garden and God’s House for Wednesday night Benediction and Sunday Mass.

Mary and Frank were married in 1954, and by 1967, they had welcomed ten children into the world. When once asked how many children she wanted, she answered warmly, “As many as God would give me.” Mary lived her true calling as a wife, as a mother, and as a child of God. Her family meant everything to her, and she selflessly devoted herself to caring for them, teaching them, and loving them. She somehow managed to keep a house of eleven people running smoothly, preparing nightly meals which all shared together, often infused with laughter. In her calm, organized, and nurturing way, she created an environment where all felt supported and loved.

At the age of 43, Mary decided to go to college and began taking courses at Northeastern University. When her parents started to decline in health, she suspended her studies to care for them, another example of her selfless love for others. She returned to Northeastern’s Burlington campus in 1981, majoring in History, and often as commuting buddies with her sons Jim and Dan who were attending Bentley down the highway. At age 54, she graduated in 1985, summa cum laude, receiving the Dean’s award for earning grades that ranked her #1 in her major. She had her own cheering section at the Boston Garden as her family proudly watched her receive her diploma.

During the four years she earned her degree, four of her children were married, and she welcomed her first two grandchildren. Her new sons-in-law and daughters-in-law readily became her sons and daughters, and she grew another heart with each grandchild born. By 2000, she had welcomed 14 grandchildren: Jennifer and Catherine Strazdins; Brian and Amanda (Betty) Sutherby; Andrew, Joseph, and Julia Loschiavo; Michael and Danielle Sutherby; Dan Pellegrini; Jaclyn Sutherby; John, Grace, and Elizabeth Marando. All will forever hold on to her generous Grammy Hugs, her welcomed squeezes around the knees, her seemingly perpetual smile, and the caring way she engaged and touched each of them. Last year she was blessed with her first great grandchild, Jason, who brought such joy to her heart.

Through the years, Mary and Frank remained strong in their dedication to their faith and to their families. Mary’s brothers and their families were always close to her heart: Bill and Jean Mooney, and John and Thomasina (Tommie) Mooney. Mary and Frank remained close with Frank’s siblings and their spouses: Mary and Dan Noonan, George and Estelle Sutherby, Gert and John Marshall, Al and Kathy Sutherby, and Rita and Frank Shaughnessy. Together they raised their large families with love, sharing countless memories at weekend cookouts, card games, weekly dinners, Foxwoods trips (Mary liked the slots), and hundreds of trips, including many to her favorite destination, Bermuda, another world.

Mary was blessed with many gifts and talents, and she used her gifts in service to God and to her family. She was brilliant, humble, compassionate, genuine, and kind to all. She enjoyed being with Frank, an exuberant extrovert and frequent life of the party, while she possessed a quiet inner strength and presence felt in other more subtle ways. She possessed the rare art of being a true listener, and she always had the right thing to say at the right moment. She would be the first to notice if someone in our large family group or at a social gathering was feeling shy or apprehensive, and she’d make them feel comfortable in a personal and nurturing way. She also had a quick wit which could surprise at times, and she shared her generous laugh often.

Among Mary’s favorite things were chocolate (especially M&Ms), Kelly’s roast beef (with Miracle Whip, not mayo), Lorna Dunes, watching sports (any kind, any time of day), and most especially, a fresh cup of tea (“Ahhh. That’s Nice. Ni-i-i-c-c-e”, said with a perfect hint of a British accent). Her consumption of M&M’s helped The Mars Company reach earnings targets on more than one occasion.

Somehow, while preparing thousands of meals, doing endless loads of laundry, attending classes, and raising her children, she managed to find time to share her many artistic talents. She played the piano beautifully, often during family parties when Frank and his siblings would accompany in song. A gifted seamstress, she made her children’s clothes for years, as well as the maid of honor dress she wore at her youngest daughter’s wedding. A patient crafter, she hand-made personalized quilts for her children, created hundreds of beautiful embroideries, and sewed dozens of plastic-point village houses which became part of our Christmas tradition. Generous as always, she gave away most of her crafts, many in celebration of weddings and births. She shared her gift of crafting with her daughters, all of whom enjoyed regular craft nights at her house through the years.

Mary was an exceptional writer, and as with her crafts, she shared her gift with others. She kept journals throughout her life which documented the day to day joys as she counted her blessings, as well as the times of sadness, none more heart-breaking than the days and weeks following the death of her daughter, Elizabeth, who passed hours after her birth. She wrote dozens of essays and short stories. She recorded journals of her many travels, including the cross-country trip with the Fab Five of Mary & Frank, Dan & Mary, and Gert. She interviewed each of her nine children following the family’s trip to Bermuda in 1977, creating a personalized journal for each that captured their emotions and memories of that unforgettable trip. Academically her pinnacle writing achievement was reflected in her History Honors Thesis: This Dark and Difficult Season: Melrose and Its Women during the Revolutionary Period.

Mary was kind to all she encountered. To cashiers at Shaw’s, to custodians at Foxwoods, to wait staff at restaurants, and to nurses at her many doctor’s visits, Mary would often say, “Thanks for coming in today.” During the last challenging 18 months of her life, Mary was in the hands of countless caregivers at Melrose/Wakefield Hospital, The Residence, and The Elmhurst, as well as many Home Instead and Care Dimensions aides. To all, she shared a welcome smile, a “Hello-Hello”, and many many “Thanks for coming in today.”

Mary was a saint on earth, devoted to her husband, to her family, and to God. She loved her home, with her favorite spot on the sunporch, sitting at the table with Frank, and with a nice cup of tea. Jesus said, “My Father’s House has many rooms. I am going to prepare a place for you, and I will come back and take you to be with me.” God has made a room for Mary, where she now sits with Frank on the sunporch, at peace, and forever remaining in the hearts of her family who love her dearly.

A memorial Mass will be held for Mary at St. Mary’s Church, 9 Herbert St., Melrose, on May 21, 2022 at 10 a.m. A funeral procession to Mary’s gravesite at St. Patrick Cemetery, Elm St., Stoneham, will follow the Mass. In lieu of flowers memorial contributions may be made in Mary’s name to St. Mary’s Church, 46 Myrtle St. Melrose, MA 02176. To leave an online message of condolence please visit gatelyfh.com.