Townspeople express their gratitude to veterans at in-person ceremony 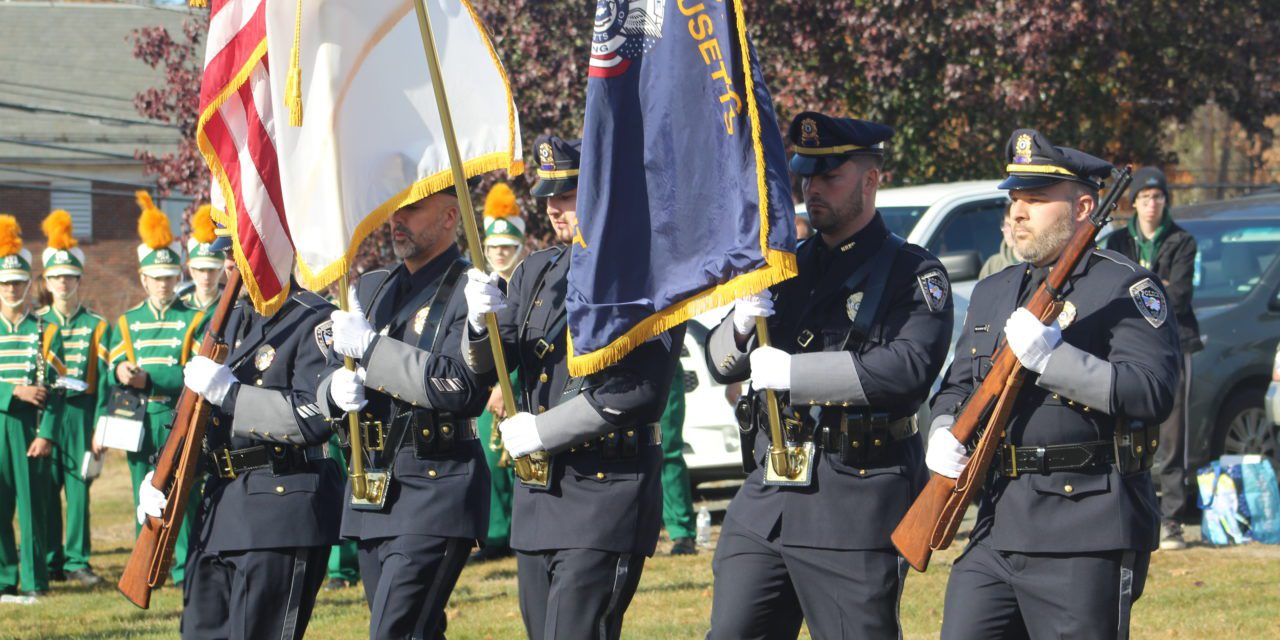 THE PRESENTATION of the Colors was adeptly performed by members of the North Reading Police Honor Guard at Thursday’s Veterans’ Day ceremony on the common. (Maureen Doherty Photo)

It was more than the spring-like warmth that drew such a large, multigenerational crowd to the ceremony held at the top of the Town Common near the town’s five war memorials. After nearly two years of virtual ceremonies on Memorial Day and Veterans’ Day, and the disruption of all other major life events and holidays experienced by everyone in society in the era of COVID-19, there was a sense of relief and unspoken gratitude among those gathered to just be among people and to be able to offer their gratitude in person. Their presence alone was an expression of this gratitude for the country’s veterans, both current and past, for the sacrifices they made to keep our country free for nearly 250 years.

Veterans’ Director Susan Magner and the Veterans Event Committee put together a traditional program for this milestone event that took place, as Magner pointed out, on the 100th anniversary of the creation of the Tomb of the Unknown Soldier at Arlington National Cemetery. It has been kept under constant watch around the clock since 1948 by Sentinels from the 3rd U.S. Infantry Regiment. 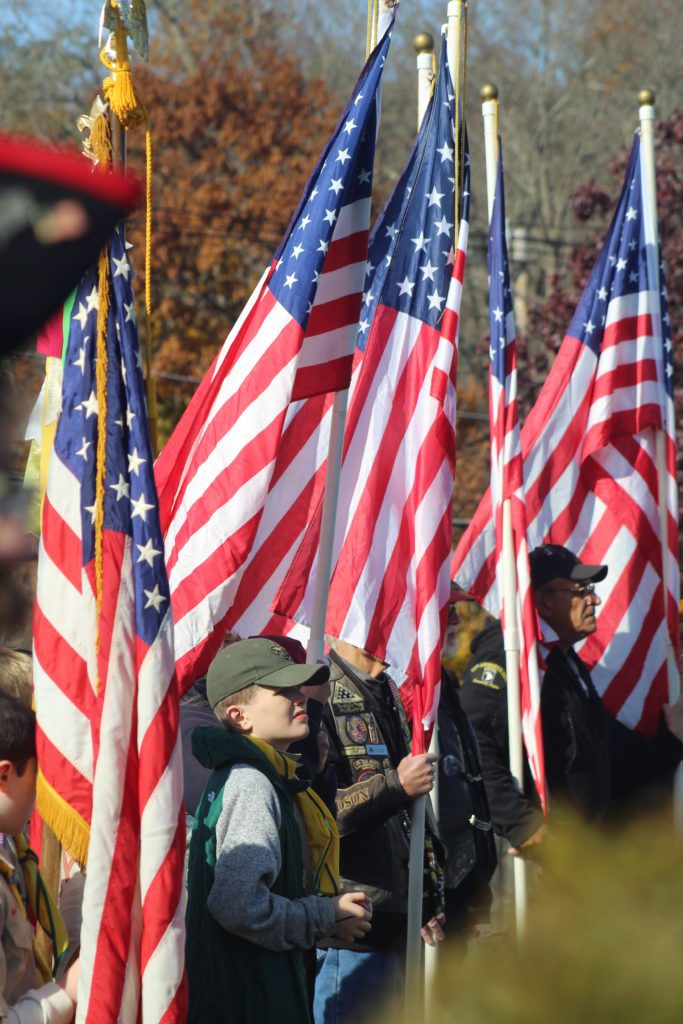 A BOY SCOUT from Troop 750 is enveloped by the American flag display formed by the Patriot Guard Riders who stood at the top of the common throughout the town’s Veterans Day ceremony. (Maureen Doherty Photo)

“For 100 years the Tomb of the Unknown Soldier has served as the heart of Arlington National Cemetery as a sacred memorial site and the grave of three unknown American service members. The Tomb connects visitors with the legacy of the United States armed forces throughout the nation’s history. It stands as a people’s memorial that inspires reflection on service, valor, sacrifice and mourning,” Magner said. “Since November 11, 1921, the Tomb has provided a final resting place for one of America’s unidentified World War I service members; those Unknown warriors from later wars were added in 1958 and 1984.”

Against a backdrop of red, white and blue created by the row of flags held steadfast throughout the ceremony by members of the Patriot Guard Riders who stood alongside a core group of dedicated members of the North Reading Co. of Minit and Militia in their Revolutionary-era uniforms, the speakers made their way to the podium.

Rev. Dr. Richard A. Hughes, pastor of the Union Congregational Church, opened the ceremony with a prayer which was followed by the Presentation of the Colors by members of the North Reading Police Department Honor Guard.

The award-winning essay in the scholarship contest offered annually to a graduating senior by the North Reading Republican Town Committee on the topic “What the American Flag Means to Me” was read by NRRTC Chair Jeff Yull on behalf of the scholarship recipient, Mark Tramontozzi.

Select Board member Rich Wallner followed by reading the town’s Veterans’ Day proclamation which calls upon the community to recognize veterans not only on November 11th but throughout the entire month of November.

He thanked Magner for “bringing this solemn ceremony back to North Reading after the long darkness of shutdowns and cancellations.” 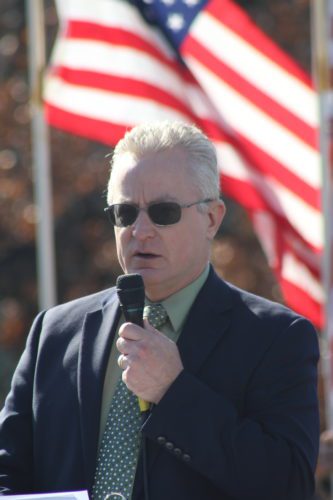 Lt. Col. Barrette also asked those gathered to give a round of applause to the youngsters from both the high school band and the town’s Scouting organizations “for taking the time to join us in honoring veterans past and present.”

“We the People of the United States, in Order to form a more perfect Union, establish Justice, insure domestic Tranquility, provide for the common defense, promote the general Welfare, and secure the Blessings of Liberty to ourselves and our Posterity, do ordain and establish this Constitution for the United States of America.

“I’ll bet some of you memorized this preamble as children watching School House Rock on Saturday mornings. I know my wife Michele and I did. The preamble to our Constitution is, in my opinion, the perfect encapsulation of what makes the United States of America such a blessed and unique country – no other country before or since has enshrined in law so many basic freedoms to include freedom of speech, the right to bear arms, the right to peacefully assemble, freedom to worship, and the right to equal justice under the law.

“Through the centuries since our founding, tens of millions of American servicemen and women have given their time and talent by taking an oath to protect and defend our beloved Constitution of the United States. In the course of our brief history, millions of American soldiers have borne life-long emotional and physical wounds; thousands have survived deplorable Prisoner of War conditions; and over 1.4 million have given the ultimate measure of their lives. In the 20th century alone, our American military proved decisive in defeating or at least containing fascist regimes including the National Socialist Party in Germany, the so-called Union of Soviet Socialist Republics, and the Communist Chinese Party on the Korean peninsula and in Vietnam.

“Our military has freed well over 100 million souls from the scourge of tyrants and despots all over the world. And yet, tyranny is on the march at home and around the world, as evidenced by massive Freedom Marches in Australia, Japan, Denmark, Italy, South Korea, the United Kingdom, the United States, and many other countries. Just this past Sunday, thousands of citizens rallied on the Boston Common to march for freedom and against the pervasive corruption that has infected our political system. An evil cabal of elite oligarchs is moving to extinguish the torch of liberty in the USA and other free countries, and Americans are once-again called-on to defend freedom. 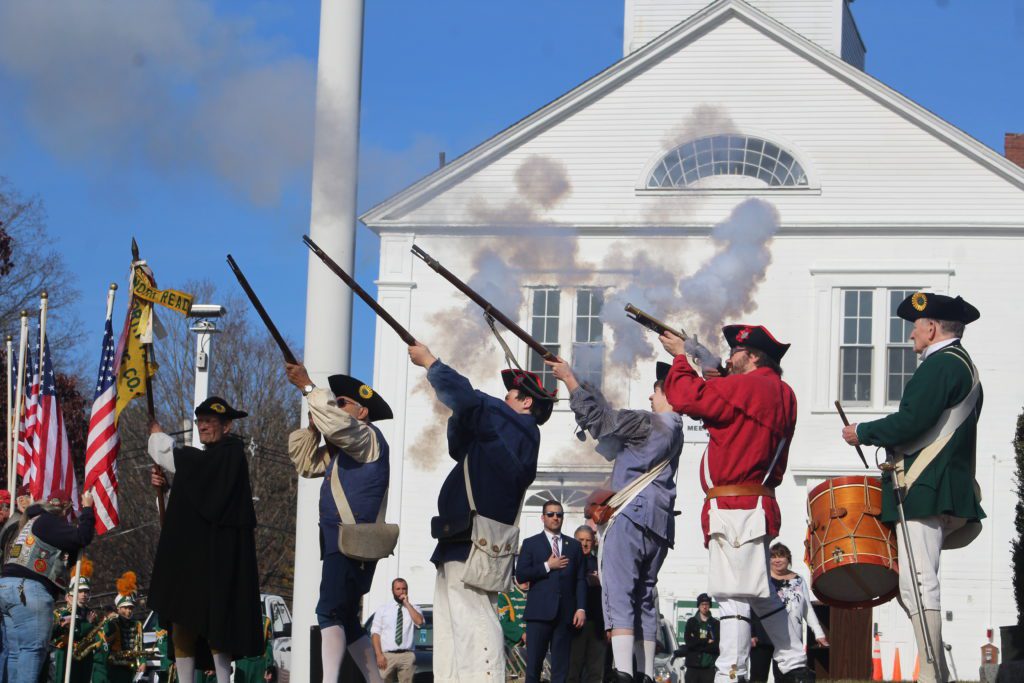 THE NORTH READING Co. of Minit and Militia fired three musket volleys in honor of all veterans as Capt. Rich Stratton (at right) played the drum. (Maureen Doherty Photo)

“In this year of the 20th anniversary of the attacks of September 11th, and the 20th anniversary of the start of the Global War on Terrorism, we especially honor the over 7,000 U.S. troops who have died in combat since 2001, along with the over 30,000 suicides of military members since 2001. But we also gather to honor the living. Today, there are an estimated 19 million living U.S. veterans. By our gathering today, we offer a special debt of gratitude to those who put themselves in harm’s way on foreign shores in foreign wars, and to the National Guard and Reserves who also serve in our homeland in times of emergency. A simple thank you to a veteran suffering physical and/or mental wounds can be a ray of sunshine to a wounded warrior.

“Ronald Reagan once said, ‘Freedom is never more than one generation away from extinction. We didn’t pass it on to our children in the bloodstream. It must be fought for, protected, and handed-down for them to do the same.’ He also said, ‘If we lose freedom here, there is no place to escape to.’

“Our veterans fought and continue to fight for our rights and freedoms—many basic freedoms have been put ‘on hold’ over the past several years – freedom of speech, the right to peacefully assemble, the right to worship, and the right to make decisions about our healthcare. Let not our gratitude towards veterans end with today’s ceremony. But let us honor them every day through our words and actions to defend the freedoms we hold dear, so they can be passed down to generations to come, just as they were defended for us by many brave men and women of our armed forces. Thank you, and may God save the United States of America.”

At the conclusion of Barrette’s remarks, the Marching Band played “American March Classics” which was followed by a series of three musket volleys by the North Reading Co. of Minit and Militia.

During the moment of silence that followed, five veterans from town placed wreaths at the base of each of the five war memorials. They stood in salute as Taps was played by Harley Duffley and Shane Hanson. Those given the honor of placing the wreaths this year were Gerard Regan, U.S. Navy submarine service, machinist’s mate 1st class; Joe Malek, U.S. Army Vietnam era, 1967-70, Spec 5; Charles Simard, U.S. Army – Korea; George E. Maker Jr., corporal, U.S. Army – Korea; and Ed Piercey, sergeant, U.S. Army, post-WWII. Incidentally, Maker has resided in town since 1936.

In Magner’s closing remarks she thanked all those present for attending the ceremony and offered thanks to all veterans who continue to keep the country safe.

The benediction was offered by Rev. Hughes and the ceremony was concluded with the Marching Band performing “God Bless America.”