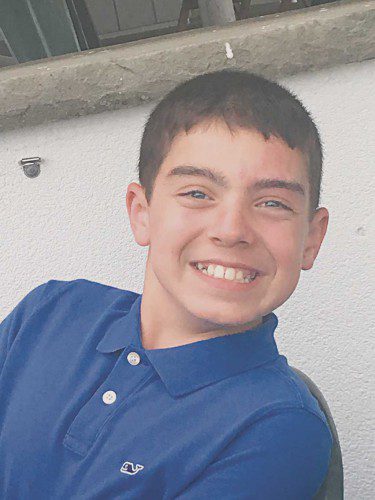 NORTH READING — Pam McIntyre is on a mission. … to lead the Sturge-Weber Foundation’s Road Race Team to yet another successful year of fundraising.

Since 2010, she has been “Running for Ry” at the Falmouth race, a seven-mile event, in honor of her son, Ryan. Now 11, he has just completed the fifth grade at the Batchelder School and is excited to be heading to North Reading Middle School this fall with his twin sister, Ava.

“Our son Ryan was born with a port-wine birthmark covering his entire left eye and forehead. He was diagnosed at 6 months of age with Sturge-Weber Syndrome (SWS). SWS is a rare neurological disorder characterized by a facial port-wine birthmark and serious medial conditions which include glaucoma, seizures and developmental disability,” she explains on her fundraising page. (https://contribute.sturge-weber.org/fundraise?fcid=686868)

Ryan’s first seizure struck at 9 months. Over the years, his seizures have been “relatively well managed through a lot of medication, with the exception of fall 2008 and the fall of 2013 when we lost control of his seizures,” she adds.

Knowing how difficult it can be for Ryan when his seizures become out of control and the long hospitalizations that become necessary at Children’s Hospital makes the McIntyre family “thankful for each healthy day.” But knowing there is no cure for SWS and no way to know when the next seizure will strike leaves families in limbo.

“We are thankful and happy to report that he has been seizure-free for over two and a half years, with one minor seizure a month ago,” Pam says.

“This year has given us the chance to exhale a bit. Medically, Ryan’s year has been relatively peaceful. This has been a gift. However, the reality for SWS families is that life is so fluid, and while one set of challenges is being successfully managed, another bubbles up,” she states.

“As with many SWS children, Ryan struggles with developmental delays which make his academic journey simply overwhelming. We are determined to help Ryan find the path that will best help him to shine,” she added.

The Falmouth Road Race has given the SWF an opportunity to raise money and a platform to raise awareness of this orphan disease. There were just five members on the SWF team the first year Pam ran it in 2010. Now, in 2016, there will be 51 runners, many of whom live in North Reading.

“We have raised over $340,000 in support of the Foundation’s effort to carry out its mission: To improve the quality of life and care for people living with SWS,” said Pam, who has served as chairwoman of the SWF board for two years.

The year, the entire team hopes to combine their efforts to raise $140,000 by running Falmouth. All funds Pam raises will go toward that goal.

The SWF seeks to combine collaborative education and advocacy in tandem with translational research, effective management and public awareness of the disease. As chairwoman of the foundation, Pam has seen first-hand how the funds raised through the Falmouth Road Race has enabled them to accomplish many positive things.

“Through the dedication and tireless efforts of their small staff, the Foundation was awarded the Eugene Washington PCORI Engagement Award by the Patient-Centered Outcomes Research Institute(PCORI). This grant will enable the Foundation to bring together all global SWS thought-leaders to one central location to focus on the future of patient-centered research. I cannot wait to attend the conference this fall,” she said.

The McIntyre family is humbled by the support they’ve received from the community over the years.

“Our amazing and far reaching community has embraced us in every way. You have shown us true friendship, love and with your help we have come to see that we truly are never alone,” she said.

To make a donation to the SWF and help Pam reach her personal goal, visit:

For those who cannot make a financial donation, she asks them to consider sharing her page on Facebook or Twitter, or sending an email to a friend with the link to her page to help spread awareness.

A history of the entire SWF team can be found on the following link: https://contribute.sturge-weber.org/falmouth/events/2016-swf-road-race-team-falmouth-ma/e75095.