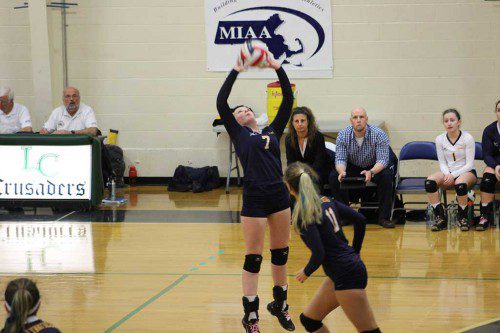 The Pioneers took an early 6-4 lead in the first set. The Crusaders responded by going on a 3-2 run, cutting the locals’ lead to 8-7.

Lynnfield responded by going on a 4-0 run, forcing Lowell Catholic to call a timeout. After the timeout, the Pioneers continued pulling away and took a 19-9 lead halfway through the set.

The Pioneers outscored the Crusaders 6-2 down the stretch to pull out a 25-11 first set victory.

Lowell Catholic took a brief 3-2 lead during the second set when both teams started exchanging points. With the second set tied at seven, the Pioneers responded by going on a 7-0 run to take a 17-7 lead.

Senior Katie Nugent had some clutch serves down the stretch, which allowed the locals to take a 20-9 lead. The Pioneers outscored the Crusaders 5-2 to win the second set 25-11.

Lowell Catholic started off the third set strong, taking an early 5-4 lead. The Pioneers responded by going on a 7-2 run to take an 11-7 lead.

The Crusaders refused to go away quietly and after a brief rally, trailed the locals 19-15 halfway through the third set. Senior captain Rebecca Albanese had some clutch serves down the stretch, which allowed the Pioneers to pull out the 25-15 second set victory.

“We fell back on our heels a little bit,” said Perrone. “We rallied and did what we needed to do. We did what we do well tonight.”

“Kathryn played a really good game,” said Perrone. “She did a great job varying up her offense so she wasn’t predictable.”

“Melissa had a great game,” said Perrone. “No doubt about it.”

“Olivia is a great leader out on the court,” said Perrone. “She is our sparkplug and when we need points, she and Katie always come through for us.”

“Came did a really nice job for us,” said Perrone. “She is one of our defensive specialists.”

“Rebecca had a really nice defensive game,” said Perrone. “She is our libero and she made some key passes for us.”

Senior Laura Mucci had five assists and three aces. Junior Maxine Boyle had one kill and one block. Senior Jessica Badger had one dig.

Perrone said she was pleased the Pioneers had nine aces during the semifinals.

“When you have no height, you have to find a way to get points,” said Perrone.