Pioneers come back to rout Reggies 34-14 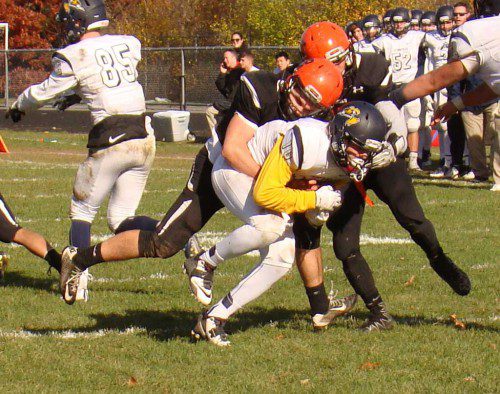 NICK KINNON (10) fights for the first down on the Pioneers’ fourth touchdown drive in the third quarter of Saturday’s victory over Greater Lawrence. (Tom Condardo Photo)

ANDOVER — Some people can wake up to soft music. Some need a loud alarm. Still others need a cattle prod. Saturday morning in Andover, the Pioneers needed a physical, aggressive Greater Lawrence football team to rouse them from their post-playoff slumber. But after sleepwalking through the first quarter and a half, the Pioneers awoke with a vengeance and scored on five straight possessions to power past the Reggies 34-14. 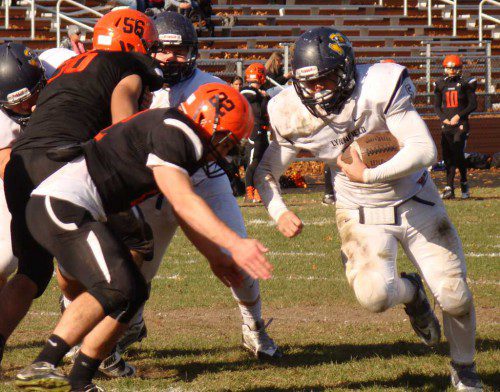 “It wasn’t good but practices weren’t good all week either so I wasn’t overly surprised,” said Pioneer head coach Neal Weidman of his team’s lackluster play over the first 16 minutes of the game. “We just weren’t ready to play today. Fortunately for us, Greater Lawrence was ready. They came out and whacked us and they forced us to wake up.”

The win, which lifts the Pioneers to 6-3 and guarantees them a fifth straight winning season, was the 70th victory for Weidman as Lynnfield head coach. He now sports a 70-30 record, a .700 winning percentage that is best of all Pioneer head coaches.

The Pioneers went three and out on their first three possessions, failing to complete a pass or pick up a first down. With five minutes left in the first half, they had gained a grand total of 10 yards.

Meanwhile, a talented Greater Lawrence team, now 6-4, was prancing up and down the field, rolling for almost 200 yards and a pair of touchdowns to take a 14-0 lead.

That’s when the Pioneers finally opened up their sleepy eyes and went to work. Mortellite (16 for 22, 218 yards, 4 TDs) got things going with a 28-yard TD pass to Anthony Murphy who powered the last 10 yards with Reggie defenders draped all over him.

Captain Kyle Hawes continued the surge by picking off a Kyle Vasconcellos pass at the Pioneer 35. A 29-yard halfback option pass from Nick Kinnon to Hawes got the Pioneers to the Reggies’ 24. Two plays later captain Louis Ellis made a circus grab of a Mortellite pass for a 23-yard score with 13 seconds left in the half to cut the deficit to 14-12. 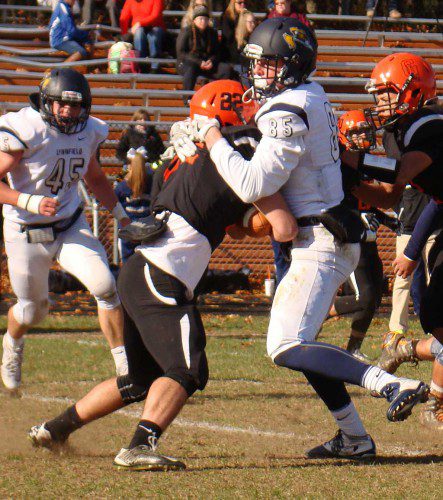 The Reggies helped the cause by trying an onside kick to open the second half but Jason Ndansi caught it on the fly and returned it to the Greater Lawrence 45 yard line. A 40-yard Mortellite to Kinnon pass got the Pioneers to the 8 yard line and Anthony Murphy cruised in from there for the score. Mortellite hit Ellis for the two points and Lynnfield had their first lead at 20-14.

“We just decided to start playing,” Weidman said of the five straight touchdown barrage. “We had a couple of guys who said ‘you know what, I’m going to play’ and they made a few plays and everyone else said we need to rally around that a little bit.”

The Pioneers now have almost two weeks to get ready for a North Reading team that will come to town on Thanksgiving Day smarting from a tough 28-7 beating from Marblehead in the D2A North Final playoff.

“We’re going to need the time to lick our wounds a little bit,” Weidman said.